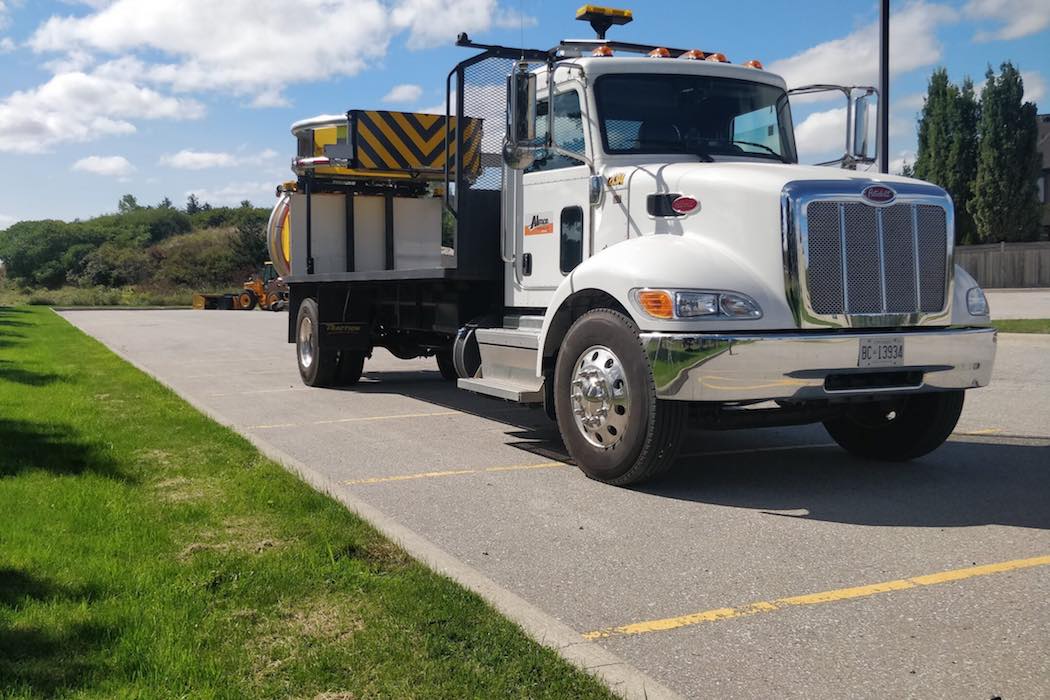 Almon received close to $1 million for this project over the course of last year, including $253,000 from the Ontario government.

The project was led by the Ontario Centre of Innovation (formerly known as Ontario Centres of Excellence) and saw Almon develop a retrofit package for the automation of heavy-duty trucks. Almon worked with Toronto-based automation startup X-Matik to retrofit a 2020 Peterbilt truck with actuators and sensors, and the University of Waterloo Mechatronic Vehicle Systems Lab to develop the algorithms needed to enable autonomous operation.

Almon was founded in 1981 and offers a range of road and infrastructure solutions. In 2019, Almon launched its autonomous truck development program and partnered with the University of Waterloo and AVIN on development.

Almon received close to $1 million in funding for this project over the course of last year, including $253,000 from the Ontario government through AVIN’s R&D Partnership Fund, with a further $685,000 in industry contribution.

The first application for this newly-developed technology is traffic control trucks. These trucks, which are equipped with a truck-mounted attenuator (TMA), are also known as crash trucks and are commonly used on roads where construction or maintenance work is being carried out next to active traffic lanes.

“The unfortunate reality is that people get injured in work zone-related collisions far too often,” said Jamie Ally, Almon’s vice president of engineering. “Our objective is to improve road safety and reduce insurance costs, by introducing autonomous systems that can detect and avoid collisions, reduce risks, automate dangerous jobs, and ultimately save lives.”

With further testing, Almon hopes to remove the driver from the crash truck and therefore remove a human driver from what the company called a “dangerous on-road job.” Almon is also working on equipping these trucks’ with advanced driver assist systems that can offer adaptive cruise control and emergency braking.

In 2016, the Ontario government launched a 10-year pilot program to allow for the testing of autonomous vehicles on public roads under certain conditions. The following year, Ontario launched AVIN, investing $80 million over five years into the Ontario Centre of Innovation-led program. AVIN aims to build partnerships across the province to develop autonomous vehicle tech.

In its latest provincial budget, the Ontario government committed $56.4 million to create a new program focused on manufacturing electric vehicles, called the Ontario Vehicle Innovation Network. The program would facilitate partnerships between startups, universities, the auto industry, and the battery sector, and would “build on the successes” of the existing AVIN program.

“While our government works to help businesses recover from the COVID-19 pandemic,
[AVIN] is fostering growth among small- and medium-sized technology companies, and positioning Ontario for long-term competitiveness,” Fedeli added.

Almon is one of many companies creating new products within Canada’s vehicle industry. Clutch, which this month raised $60 million in funding, offers an online car retailer platform. NuPort Robotics, also funded by AVIN, is currently working on a new automated heavy-duty trucking initiative alongside Canadian Tire. Gatik, which is a Toronto and US-based autotech firm that partnered with Loblaws in 2020, also recently received capital from AVIN’s R&D fund.

Stressed? There’s a wearable for that

The wearable tech space in on the rise as many manufacturers are launching new products. Research firm IDC recently predicted that we should expect…