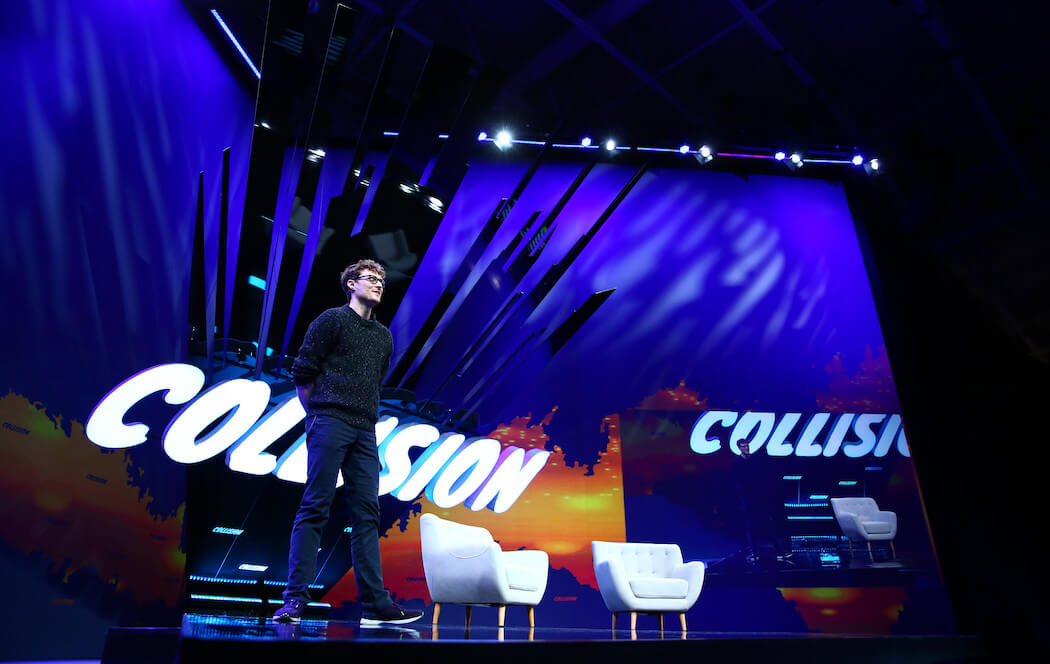 Day two of Collision 2021 included discussions about the venture capital landscape in Canada and how startups and investors alike are having to change tactics, as well as more talks about Collision returning to Toronto next year and Toronto Mayor John Tory looking to attract more foreign firms to the city.

“I’m looking forward to a highlight of 2022…being Collision being right here back in Toronto.”

Having kicked off on Tuesday, Collision claims this has been its biggest year yet, with 38,000 attendees from 141 countries and more than 1,200 startups participating. Last year, Collision from Home reportedly saw an attendance of 32,000 people from 140 countries.

At a Wednesday morning press conference, Paddy Cosgrave, CEO and co-founder of Collision, announced the addition of the organization’s first external board member, Nathan Hubbard. Hubbard is the former CEO of Ticketmaster and formerly served as VP of global media and commerce at Twitter, he is currently the CEO and co-founder of live events platform Rival.

Cosgrave also spoke to his company’s plans for future events, noting that Web Summit will be taking place in November, though the format will depend on local regulations at the time. He also spoke to hosting events in 2022. Web Summit is set to host events in Tokyo and Kuala Lumpur.

On Monday, Cosgrave talked about bringing Collision 2022 back to Toronto. “We’ve all missed massively not being able to run Collision in Toronto, we’re very much running it from Toronto, and we’re looking incredibly forward to being back in Toronto in 2022,” said Cosgrave.

“Collision 2022, it’s absolutely in person,” Cosgrave said Wednesday morning. “I can’t wait for real-world events to be back and to be back in Toronto.”

“I’m looking forward to a highlight of 2022, a much more normal year, being Collision being right here back in Toronto, we’re going to show you a good time,” said Tory during a Wednesday session.

The virtual Collision was made possible by an online conferencing platform that Collision’s team has been developing over the last decade, something that was accelerated and announced last year. After debuting the software at Collision in June, the event organizer also used the tech at its sister event, Web Summit, which was held in December. Collision also planned to offer its software to other large event organizers. In March of this year, the platform was licensed to its first-ever customer, the United Nations Development Programme.

Tory was an active member of day two of Collision. Toward the end of the day, Tory joined a roundtable discussion with various company leaders and members of the global tech community. During the session, Tory commented on Sidewalk Labs’ Quayside proposal, which fell through last year.

He said after quelling public concerns over data collection and privacy that plagued the project, he assumed the remainder of the project would be “smooth sailing.” But as the pandemic hit, Tory said Sidewalk Labs and the City began to argue over the price of the land set for development. Tory said he believes Sidewalk was expecting a “bargain-basement price,” due to the pandemic, and because the City refused to give in to these demands, the project ultimately fell through.

At an earlier press conference Wednesday, the mayor also talked about how the Toronto tech community has been impacted by the COVID-19 pandemic, and how he plans to attract more businesses to the city once the pandemic is over.

Tory said although he has observed tech companies reporting cash flow and employment problems, he noted many tech companies have seen increased revenues during the pandemic. The mayor attributed this growth to Toronto’s deep talent pool, strong post-secondary institutions, openness to immigration, a large critical mass of industries, and high quality of life. He said his focus will be on international outreach to ensure Toronto’s talent pool remains robust, as well as putting the right incentives in place to attract global companies.

“There’s not a day that goes by that I don’t make calls to somebody, to encourage them along in the process of investing here, and it’s been working,” Tory said.

Collision 2021 day two also saw a lively discussion between Janet Bannister of Real Ventures, Shawn Chance of OMERS Ventures and Karamdeep Nijjar of Inovia on the landscape of Canadian venture capital and investing. The group, which comprises some of the biggest investment firms in Canada, touched upon the increased interest in public markets and the need for more Canadian corporations and pension funds to participate in venture investing.

Noting the changes brought about by COVID-19, such as greater access to talent and increased opportunities for startups to raise capital, Nijjar, specifically, pointed to how the pandemic has forced venture firms to be more proactive in building relationships with companies they see potential in. Echoing that point, Chance stated that while the beginning of COVID-19 saw VCs focused on existing portfolio companies, that pool has started to “run out,” forcing firms to do more remote deals with founders they have never met. Bannister asserted that as companies have more places to turn for funding, including public markets, investors are recognizing they need to invest earlier, which she said has led to higher pricing of Series B and C rounds.

When COVID-19 hit, Hootsuite CEO Tom Keiser said that marketers immediately cut down their budgets and “went into scramble mode.” Following that “really dramatic” decline in marketing spending, said Keiser, Hootsuite “saw the traffic activity on social media platforms explode,” as businesses reinvented how they connected with customers by necessity.

During the pandemic, Keiser thinks this is beginning to change. “If you’re starting a business today, you start on social, and that’s where you build your brand.” With this shift, he said, comes an evolution in how marketing return-on-investment is being calculated.

Between the growth of social commerce and the convergence of gaming and social media, Keiser sees the future of social media marketing as bright and views the prospect of increased regulation of social media platforms as a positive development for brands and brand safety. “We look at it through, the lens of regulation is going to improve the platforms, so the more disinformation, the more bad behavior comes off the platform, it becomes friendlier for businesses, it becomes friendlier for brands, for nonprofits, for government organizations to be able to connect and communicate, and to build community and relationships, so we’re definitely for and pro-regulation on this,” the CEO said.

Senso.ai, which provides financial institutions with predictive intelligence through AI, is launching a new product this summer aimed to allow consumers to find a mortgage.

Moves Financial, which offers a loan platform for gig economy workers, recently went live with its app in the United States one week ago and plans to release more financial features for gig workers this year.

Eddy Travels, which offers a virtual travel bot to help consumers find deals on flights and hotels, recently launched a new product for group travel planning. The startup, which came to Toronto from Lithuania via the Techstars Toronto accelerator, is also launching new integration partnerships this summer.

With support and files from Meagan Simpson