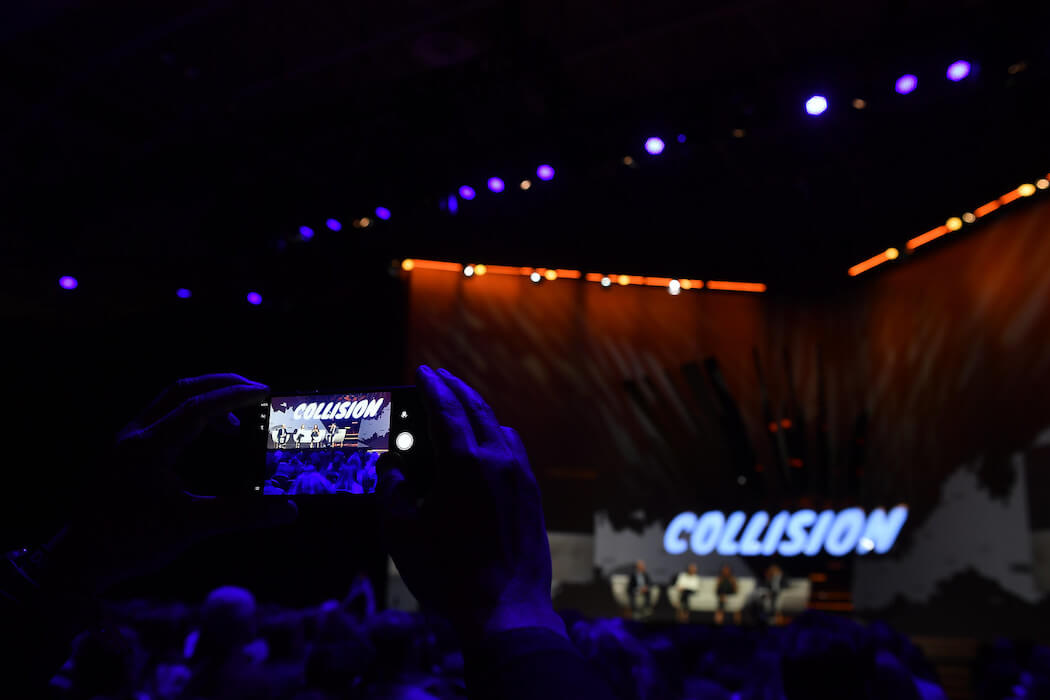 Collision 2021’s virtual conference kicked off this morning with opening remarks from Paddy Cosgrave, the co-founder of Collision and Web Summit, and Mayor of Toronto John Tory.

This is the second year Collision is being hosted virtually due to the COVID-19 pandemic. Collision was originally set to be held in Toronto for three years beginning in 2019 and had hoped to return as an in-person event in 2021. Last year, Collision from Home reportedly saw an attendance of 32,000 people from 140 countries.

“We’ve all missed massively not being able to run Collision in Toronto…we’re looking incredibly forward to being back in Toronto in 2022.”

“It’s been quite an incredible year,” said Cosgrave, who stated that Collision hopes to host the event in person in Toronto in 2022.

“We’ve all missed massively not being able to run Collision in Toronto, we’re very much running it from Toronto, and we’re looking incredibly forward to being back in Toronto in 2022,” said Cosgrave, who called Toronto the “the hottest city in tech in the years leading up to 2020.

For Tory, one of the biggest lessons he’s taking away from COVID-19 is that “we’ve got to make greater use of technology” before a future crisis. The mayor cited the need to deploy technology to better support Toronto’s marginalized communities and bolster the city’s communications and booking systems, especially those related to vaccine information and administration.

Going forward, Tory views the outlook for Toronto’s tech ecosystem as positive. “The smart people that were here before the pandemic are still here,” he said. “The good schools are pumping out more of them. The tech companies that were here before, by and large, are still here.” Mayor Tory claimed that during the pandemic, 70 percent of Toronto tech companies either gained jobs or avoided layoffs.

“I continue to be bullish about things, and we’ll be picking up where we left off as soon as the health circumstances permit us to do so, and we want Collision back here in 2022, no ifs, ands, or buts,” the mayor stated. He also highlighted the recent slew of tech companies that have chosen to expand to Toronto. “Even during this terrible time when everything was kind of shut down and nothing was going on, we’ve had Pinterest, Uber, Reddit, Twitter, Entrepreneur First, Microsoft, and TikTok, all open offices new offices or expanded offices [in Toronto],” he said.

Cosgrave agreed, predicting that some of the biggest beneficiaries of the mass shift to work-from-anywhere will be open and liveable cities like Toronto.

The remote future of work

As Collision hosted speakers remotely from all over the world, Daniel Saks, co-CEO and president of Montreal-founded AppDirect, sat down with Workato founder and CEO Vijay Tella to talk about how companies can simplify workflow in a remote world. The pair agreed that the pandemic has created new demands and opportunities for businesses of all sizes in how they approach their work and the apps they use to get work done.

Tella observed the pandemic has forced many companies to move features and functions to the cloud very quickly, ultimately accelerating their digital transformation plans. Saks said beyond the pandemic’s impact on features and functions, successfully shifting operations to a remote format comes down to culture. The AppDirect CEO said the companies that effectively rethink culture, rethink how they are empowering their people, and lead with a digital-first mindset, are the ones that will find success in the new reality of work.

During his Collision appearance, Zach Perret, the CEO and co-founder of FinTech giant Plaid, described what he saw as the three waves of digital finance innovation. The first, said Perret, whose company recently secured Series D financing at a $13.4 billion USD valuation, was driven by the disruptors, including startups like Robinhood and Venmo. They were followed by the second wave of innovation, which was driven by the financial services industry itself, in response to heightened consumer expectations driven by the disruptors. The third wave, said Perret, is “embedded finance,” which involves large technology companies building better financial experiences into their existing products.

The godfather of AI

Canadian artificial intelligence (AI) pioneer Geoffrey Hinton spoke about deep neural networks. Artificial neural networks are mathematical computing systems inspired by the brain’s neurons and synapses. They lie at the core of AI. Hinton’s talk focused in particular on how to design neural networks that could interpret images “the way people do.”

Hinton, a Google engineering fellow and co-founder of Toronto’s Vector Institute, is currently working on an imaginary system that he refers to as GLOM, which he announced in February via Twitter. He described GLOM, which aims to replicate the brain, in technical detail during his talk.

In January, Wattpad entered into a deal to be acquired by South Korean internet giant Naver for $600 million USD. The deal is set to align Naver’s WEBTOON subsidiary with Wattpad’s own content platform. At Collision, Wattpad CEO Allen Lau discussed how Wattpad plans to bring its mission of empowering creators to WEBTOON and Naver.

Lau said beyond combining Wattpad’s 90 million user base with WEBTOON’s 72 million monthly active users, the deal will also allow Wattpad to take content on its platform and combine it with WEBTOON’s visual comics and animation. “That has a multiplying effect on the value of the content,” said Lau. He also highlighted other ways Wattpad has sought to create value for creators, including Wattpad’s AI insights to promote certain stories as well as the company’s television and film production endeavours.

Vancouver-based Dapper Labs has been very active in recent months. The company recently raised $305 million in financing from a large group of investors (including a contingent of professional athletes) following the successful launch of its NBA Top Shot app, and is already rumoured to be raising another round of investment. At Collision on Tuesday, Dapper Labs’ CEO Roham Gharegozlou spoke with NBA star and tech entrepreneur Spencer Dinwiddie on cryptocurrency and Dinwiddie’s upcoming app, Calaxy. Dinwiddie is also an early investor in Dapper Labs and invested in the company’s most recent financing round.

During their discussion, Dinwiddie said NBA Top Shot’s strength lies in its ability to connect people and engage fans. “The more that you draw the fan and the player – or the fan and the entertainer or wherever the value is in – closer together, there’s so much there, and I think NBA Top Shot does a great job at it,” said Dinwiddie.

Inclusion in Canadian innovation from an Indigenous perspective

Day one of Collision also included a panel discussion about inclusion in Canada’s innovation ecosystem, from an Indigenous perspective. According to Jeff Ward, the CEO of Animikii Indigenous Technology, when he began his career as an Indigenous person in Canadian tech 20 years ago, it was a lonely place. But today, he said, that’s no longer the case. “There are many indigenous software developers and product designers and entrepreneurs,” said Ward. “What we’re trying to do at Animikii is try and change that narrative.”

Aside from changing this narrative, according to the panellists, one of the biggest challenges faced by Indigenous entrepreneurs in Canada today remains limited access to capital. Ward has personally been turned down by all of the big banks and some of the available programs. “They’re not set up to support a business that looks exactly like an Indigenous tech shop,” he said. For governments and businesses, Ward said, there are “a lot of practical, actionable” steps” they can take to support Indigenous entrepreneurs and tech workers. “Look at your supply chain. Look at the businesses you’re supporting. Look at hiring indigenous talent. The roadmap is there,” he said.

With support from Meagan Simpson

Photo of Collision 2019 mainstage by David Fitzgerald/Collision via Sportsfile

Kitchener-based Vidyard, which helps marketing and sales teams leverage analytics from video, has opened a new office in Vancouver. The company will work out…