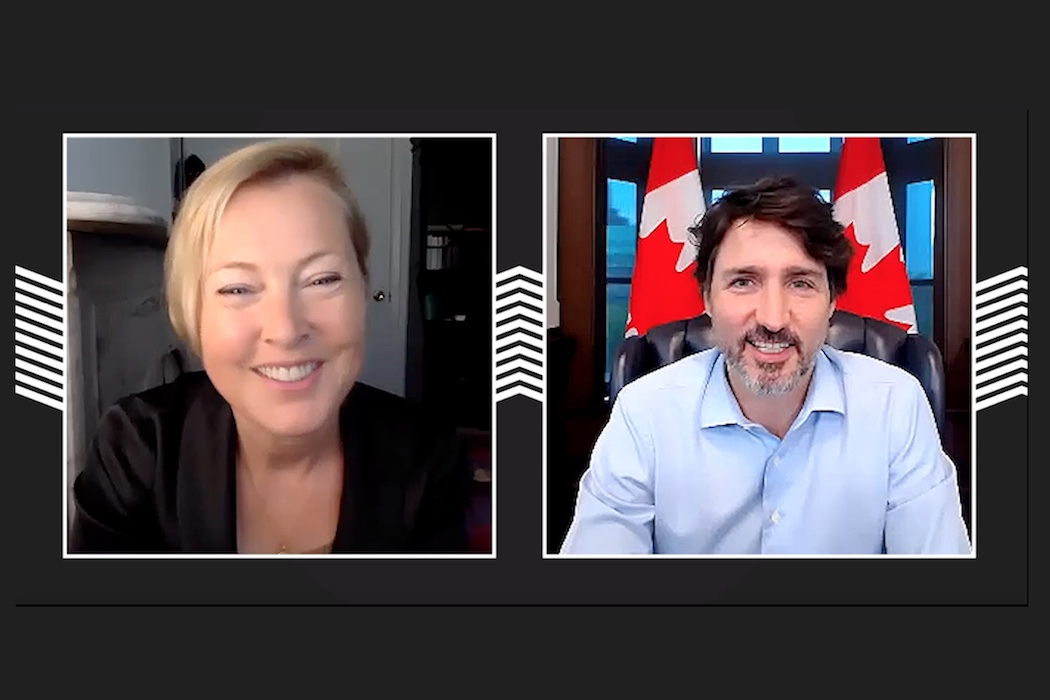 Thursday was the final day of Collision from Home, the virtual tech summit held in place of Collision Conference due to the COVID-19 pandemic. To close out the 2020 conference, Prime Minister Justin Trudeau participated in a virtual fireside discussion with Gillian Tett, editor-at-large at Financial Times.

“We knew, first of all, [that] science and data and technology was going to be key to getting us through this.”

Trudeau was one of 600 speakers featured for the virtual conference. Other notable people that spoke at the two-day conference included Tedros Adhanom Ghebreyesus of the World Health Organization and Parag Agrawal, CTO of Twitter. Trudeau discussed how Canada has seen “tremendous benefit” in turning to science and tech during the global crisis.

According to the Collision website, more than 32,000 people from 140 countries joined the entirely-online event. Trudeau’s fireside session, which was recorded in advance of the conference, focused on Canada’s response to the COVID-19 pandemic. The prime minister placed particular emphasis on how innovation can fight the virus.

Trudeau began by discussing the federal government’s response to the COVID-19 pandemic, including the decision to cease non-essential travel to and from the United States, as well as the Canada Emergency Response Benefit and the 75 percent wage subsidy.

“We knew, first of all, [that] science and data and technology was going to be key to getting us through this,” the prime minister said. “So we created a lot of space to listen to our experts [and] listen to science.”

“When we compare to Northern Europe and the United States and others, [Canada is] doing better,” he added. “It’s still a challenge, [we have] around 100,000 cases, but we’ve got the trajectory we want and we’re continuing to feel optimistic.”

The prime minister discussed contact tracing, following the government’s announcement that it would launch a national app for contact tracing that was developed in partnership with Canadian tech companies Shopify and BlackBerry. Trudeau said the app will tell people if they have been in the proximity of someone who has tested positive. He also said the information from each phone will be anonymized and that the app will operate on Google and Apple’s API, through Bluetooth handshakes.

“All it does is tell you if you’ve been in proximity to the phone of someone who has subsequently tested positive,” Trudeau said. “So there are no identifiers, it goes to a national big database of anonymized codes for the phones that will simply give you an alert to say ‘you might have been exposed, you should call in.'”

Trudeau said the government looked at many different models when considering the contact tracing app, but did not want to implement an app that works “in the forefront of the phone” due to the privacy concerns around the model.

“Shopify sort of built the code, BlackBerry ensured the security around the codes and around the systems, so we can really turn to Canadians and say, ‘This is a tool that you can trust that is going to help,'” Trudeau said.

The conversation then turned to tech migration, notable given the United States’ President Donald Trump’s recent suspension of all new work visas. Trudeau said as a result of decisions like these over the last few years, Canada has seen high numbers of scientists, tech startups, and programmers arriving north of the border.

“Canada continues to be incredibly welcoming towards immigration, particularly tech immigration and high-value immigration. This is is where I disagree a little bit with the American president,” Trudeau said. “I believe that as you bring in high-quality people to do high-quality jobs, you create more jobs for Canadians, you create opportunities in the economy, you create growth that is beneficial.”

In March, Collision announced it would cancel the in-person portion of its 2020 event and shift it online due to public health concerns associated with COVID-19. The annual tech conference, which draws thousands of attendees each year, began a three-year stint in Toronto in 2019. The conference is expected to return to Toronto as a physical event in 2021.

Trudeau wrapped up his fireside chat by saying he believes the recovery curve from COVID-19 will look something like a hockey stick, “where their recovery will be slower than the shutdown was.”

“We focused on supporting people in businesses through these months of total shutdown so we could get the curve to be totally flat,” he said. “Now, we’ve just got to be really, really vigilant as we reopen that we use technology, contact tracing, massive testing… so that we can climb out of it in a steady way.”

Neptune made a splash back in mid-February when it announced its second generation smartwatch. The Neptune Duo is a bold concept that flips the…