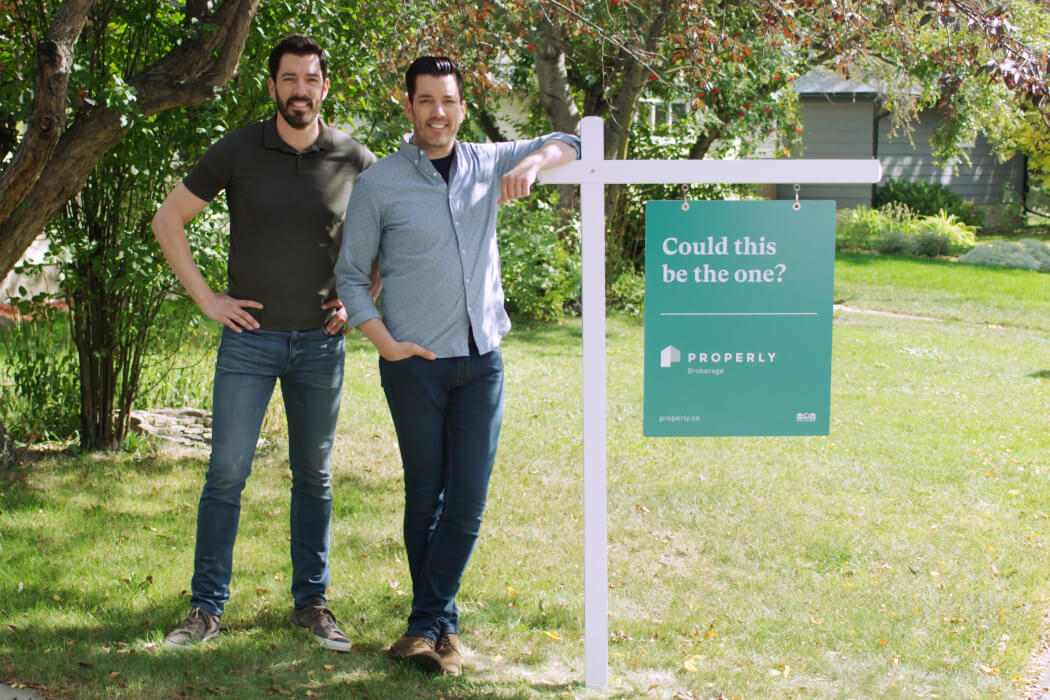 Proptech startup Properly has landed a couple of like-minded, celebrity investors. Real estate television personalities Drew and Jonathan Scott have invested in the company as part of a new partnership. Neither party disclosed the amount of the investment.

“They have been helping Canadians get their dream homes for the last decade-plus, and now alongside Properly, Drew and Jonathan can bring that TV magic to the lives of everyday Canadian homeowners reaching for that perfect home,” Properly co-founder and CEO, Anshul Ruparell, told BetaKit.

The Scott Brothers are well known for their real estate-focused television shows that include Buying & Selling, Brother Vs. Brother, and the Property Brothers at Home. The pair have their own production company, line of furniture, and have written a couple of bestselling children’s books.

“It’s critical for us to establish our brand and build trust.”

Ruparell said the Scott Brothers will help enhance Properly’s brand, which is the next challenge facing the company as it prepares to go from serving the Greater Toronto Area to the rest of Canada.

“It’s critical for us to establish our brand and build trust,” Ruparell said. “We want Canadians to feel at ease with Properly doing the biggest financial transaction of their lives.”

Ruparell noted that the Scott Brothers have helped 500 or more families find their dream homes. “It’s one of the reasons why the Scott Brothers are so powerful,” he added. “We believe to partner with them will establish that brand and build trust.”

Properly provides its customers with a Sales Assurance contract, which effectively acts like a firm commitment to sell their homes, according to Ruparell. Prospective buyers can take the contract to any financial institution in Canada, and receive the capital they need to buy their home with an unconditional offer.

Once the buyers have bought their new home, Properly lists their old house on the market, guaranteeing that if the house doesn’t sell within three months, Properly will buy it at an agreed-upon price.

“As of today, we’ve yet had to buy a home,” Ruparell said. “All the homes have sold very quickly.”

While the company does not disclose its sales information, Ruparell said they’ve helped hundreds and hundreds of homebuyers.

Jonathan Scott called Properly “a real estate brokerage for the modern consumer, putting people in charge of the biggest financial decision of their lives. That’s why we’re not just partnering with Properly — we’re investing in the company as well.”

Ruparell co-founded Properly in 2018, along with Craig Dunk and Sheldon McCormick. Before Properly, Ruparell founded two companies, all of which were acquired, and held roles in venture capital, private equity, and investment banking at FJ Labs, CPPIB, and Merrill Lynch.

Dunk co-created BlackBerry Messenger and Relay as one of the first 50 employees at Research in Motion before co-founding Properly, while McCormick launched UberX in Canada and was the general manager for Uber in Ontario.

“My co-founders and I recognized a lack of innovation in the Canadian real estate industry for what seems like decades and it resulted in an experience for Canadians that is complicated, stressful and expensive when it relates to going through what is one of the most significant milestones of their life,” according to Ruparell.

He noted that the founding team saw an opportunity to take an industry that had “largely been in service to itself, and to make it in service of customers.”

“There’s not really any other companies doing anything remotely similar to what Properly’s doing.”

In July, Properly closed a $44 million CAD all-equity, all-primary Series B round led by Bain Capital Ventures (BCV), with participation from strategic investors Intact Ventures and FCT. A number of notable individuals participated in the round, including Wealthsimple’s Mike Katchen, Spencer Rascoff (co-founder and former CEO of Zillow), and Eric Wu (CEO of Opendoor), among others.

The round brought Properly’s total funding to date to $60 million CAD, but that number omits the $100 million credit facility the company secured from Silicon Valley Bank and i80 Group last fall to underwrite its Sales Assurance product.

While Properly’s model is different from other proptech companies, it’s not alone in the market. A February report from the Proptech Collective noted out of 300 startups surveyed, approximately 60 are in early growth stages. Sixty-seven percent of proptech startups in Canada were founded after 2014, and of the startups studied, 59 percent are at the pre-seed, angel, or seed stage of their growth.

The report said that these early-stage companies are drawing capital from large investors in both Canada and the United States, including FJ Labs, which has invested in Properly and Tread.

Among the most funded proptech startups in Canada is Sonder, which has raised $698 million CAD to date, and Ecobee with $203 million to date.

Nonetheless, Ruparell insisted “there’s not really any other companies doing anything remotely similar to what Properly’s doing.”

Certainly, it looks as if Properly is willing to put its money where its mouth is; the company announced that to celebrate the Scott Brothers partnership with Properly, anyone who uses the company from October 4 to December 31 will get a chance to win $25,000 in cash and a 45-minute private video consultation with the Scott Brothers.

“Our biggest ambition is to make the home buying experience seamless for all Canadians, not just those in Toronto,” concluded Ruparell. “We’re committed to providing Canadians across the country with a smoother, less stressful and more data-driven experience that will allow them to act with confidence.”