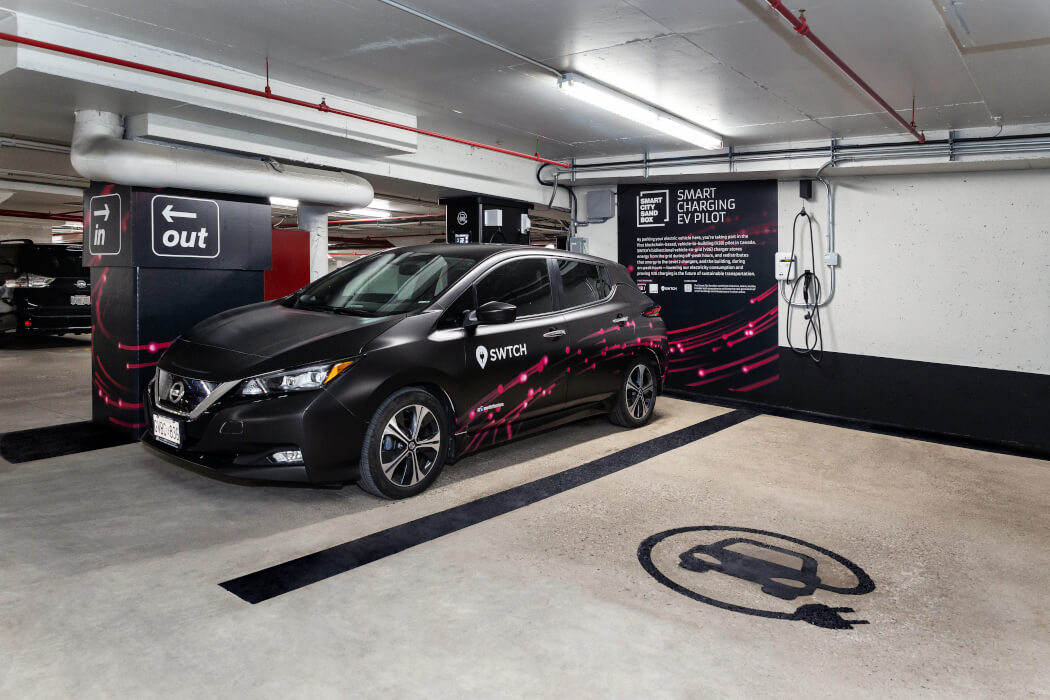 The pilot is meant to show how commercial building owners can accommodate the growing demand for EV charging stations while simultaneously improving the building’s energy efficiency and reducing operational costs.

The pilot is taking place at Slate-owned 55 St. Clair West in Toronto, headquarters to IBI Group and the Smart City Sandbox.

The pilot is designed to help solve the issue of how to accommodate a rise in EV charging infrastructure without placing additional strain on the electrical grid.

SWTCH’s vehicle-to-grid technology allows buildings to draw energy from parked EVs during on-peak hours rather than from the grid. During the pilot, a parked Nissan Leaf will store energy during off-peak hours and redistribute that energy to the building and the EV chargers in use, creating an energy flow that is cost-effective and environmentally sustainable.

The technology and model SWTCH developed includes a financial incentive for EV owners to participate in the program, which leverages the blockchain. The SWTCH app tracks when energy is drawn from a car’s battery and when it’s charged, creating a history of credits and debits securely managed through blockchain technology that participants can monitor on their phones.

“As an early-stage investor in SWTCH, we believe the pilot embodies all tenets of this mission by allowing EV owners to participate in an innovative solution that supports decarbonisation and benefits all stakeholders,” said IBI Group CEO, Scott Stewart

It offers entrepreneurs and startups an opportunity to explore new technologies and innovations, while gaining access to expert knowledge, data, mentoring, and potential funding and routes to market through Sandbox partners.

Founded in 2016, SWTCH created an end-to-end EV charging and energy management solution. In 2020, the company raised a $1.1 million seed round to help with expansion across North America. IBI group led the funding round at the time.

The IBI Group is a Canadian design company focused on building infrastructure for cities of the future, while Slate Asset Management is a global alternative investment platform focused on real estate.

SWTCH previously partnered with Opus One solutions to launch a blockchain-based EV charging management platform. Announced in 2020, the partnership included a $1 million investment from the Natural Resources Canada (NRC) Electric Vehicle Infrastructure Demonstration program, with total contributions towards the project from SWTCH, Opus One, and the NRC totalling $2.6 million.

SWTCH, which is backed by MaRS Cleantech, is an alumnus of Communitech’s Fierce Founders program and DMZ Sales Accelerator, with the startup having won $25,000 after taking part in the DMZ’s Women Founders accelerator pitch competition in 2018.

When it comes to EV charging technology, SWTCH is a relatively small player in the space.

AddÉnergie, a Québec City-based startup that creates charging solutions for electric vehicles (EV), closed $53 million in Series C funding in October, 2020. The round, which consisted of both equity and debt financing, brought the startup’s total raised to date to $83 million.

AddÉnergie has set up over 11,000 charging stations in cities such as Los Angeles, Cincinnati, and Toronto.

According to the Global EV Outlook 2021, “electric car markets in other countries were resilient in 2020. For example, in Canada the new car market shrunk 21 percent while new electric car registrations were broadly unchanged from the previous year at 51 000.”