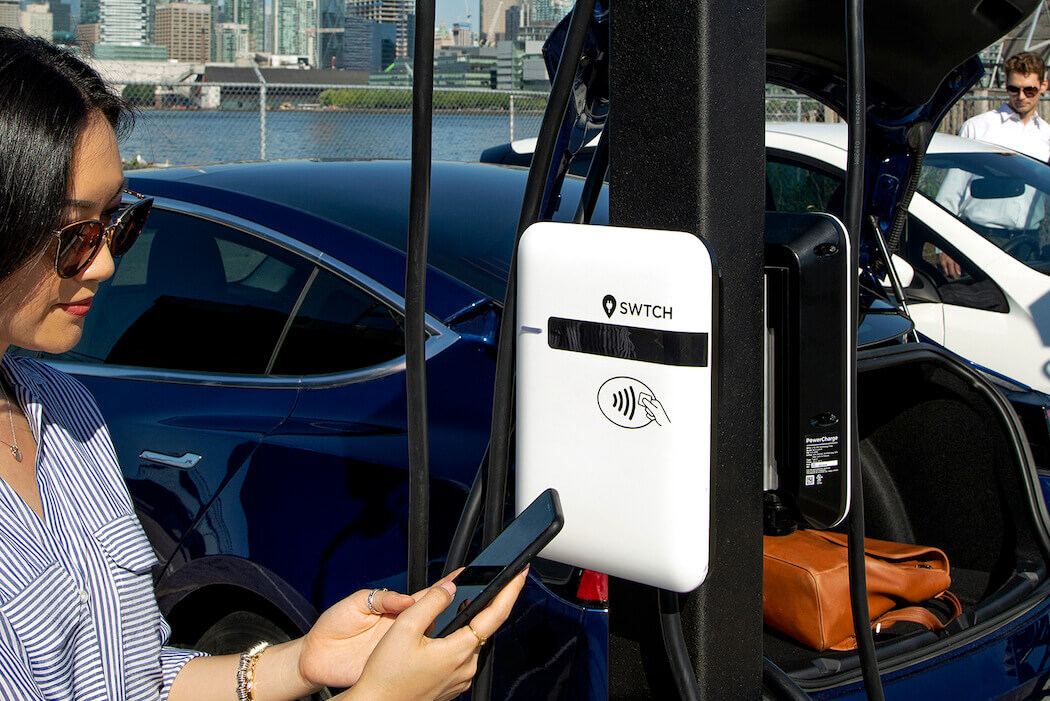 SWTCH Energy Inc. and its co-founders Carter Li and Laura Bryson are looking to address the challenges of urban electric vehicle ownership in North America. The startup, which was founded in 2016, has created what it calls an end-to-end electric vehicle (EV) charging and energy management solution.

“[SWTCH is] trying to make it easier for the real estate developers and the property managers to provide this amenity to the tenants.”

It sells the EV charging solution to multi-unit residential and commercial properties, and last year SWTCH pulled in more than $1 million in revenue.

SWTCH has now raised a $1.1 million CAD seed round to fuel the expansion of its charging network across North America.

The seed round was led by IBI Group, a Canadian design company focused on building infrastructure for cities of the ‘future’. Active Impact Investments, Cogito Capital, Export Development Canada (EDC), and Ontario Centres of Excellence (OCE) also participated in the round.

“We were essentially trying to solve our own selfish problems of trying to own a green vehicle … living in downtown Toronto,” Li told BetaKit. “[We realized] how prohibitively expensive and difficult it was to do so if you don’t live in a single unit residential home.”

“We realized that it was almost next to impossible at that time [and] that was really the genesis of our company, to try to provide charging stations and charging for electric vehicles in places where you see the most amount of people wanting electric vehicles, cities like Toronto and Vancouver,” said Li.

SWTCH has developed an EV charging and energy management platform, which includes charging stations and the tech behind it – usage enforcement, billing, and smart energy management. The startup’s chargers are Open Charge Point Protocol (OCPP) compliant, meaning SWTCH adheres to creating chargers that are universal. The theory behind SWTCH’s technology is to optimize charger usage to benefit both charger providers (building management) and drivers.

SWTCH, which is backed by MaRS Cleantech, is an alumnus of Communitech’s Fierce Founders program and DMZ Sales Accelerator, with the startup having won $25,000 after taking part in the DMZ’s Women Founders accelerator pitch competition in 2018.

The $1.1 million seed round brings SWTCH’s total funding to date to $3.5 million, which, according to the company, is a combination of equity, grant, and non-dilutive funding.

Ownership of EVs has been steadily on the rise over the last decade. According to The Global EV Outlook, an annual publication that reviews electric mobility around the world, sales of electric cars topped 2.1 million globally in 2019, accounting for 2.6 percent of global car sales. And while that number may seem small, it represented a 40 percent year-on-year increase.

The 2019 report also recorded 7.3 million chargers for EVs worldwide, noting that while most charging is done at home and workplaces, the deployment of publicly accessible charging locations is outpacing the sale of EVs. The majority of those chargers are located in China.

Policies supporting the use and creation of EV transportation have also been on the rise. To date, 17 countries, according to Global EV Outlook, have announced 100 percent zero-emission vehicle targets, with the phase-out of combustion engines by 2050.

Canada is among those, having committed in early 2019 to making zero-emission cars 100 percent of those sold in the market by 2040. The federal government allocated $300 million to incentivize Canadians to buy EVs, offering a $5,000 rebate to buyers. Of that money, $225 million has reportedly been spent.

The federal government also committed $130 million over five years in Budget 2019 to deploying a network of zero-emission vehicle charging and refuelling stations across the country, of which it has already begun work on.

These types of policies, which are also centralized at the provincial level in Canada, can dictate where SWTCH sets up shop. SWTCH’s CEO, Li, used Ontario as an example, calling the province’s market “red hot” prior to Premier Doug Ford coming in and cancelling a province-wide EV rebate. Despite this, the City of Toronto implemented its own strategy earlier this year looking to make all vehicles in the city electric by 2050.

Urban centres are SWTCH’s sweet spot, with Li noting to BetaKit that the startup’s ultimate goal is to solve the problem of owning and charging EVs in an urban setting.

“It’s not just putting [chargers] in, but also … about the energy components,” the CEO said. “The real estate developers don’t mind putting it in if it doesn’t cost them an arm and a leg to do so. So [SWTCH is] trying to make it easier for the real estate developers and the property managers to provide this amenity to the tenants. And, at the same time, we’re trying to provide these tenants and residents easy access to charging.”

SWTCH plans to use its seed financing to expand its product offering to metropolitan areas across North America, with the aim of establishing itself as a leading EV charging and energy management company for high-density urban areas.

A team of eight, Li told BetaKit SWTCH hopes to add an additional three to five employers this year to help with its expansion in New York.

SWTCH is also working to develop partnerships with large real estate companies and firms like IBI in order to expand its presence.

Scott Stewart, CEO of IBI Group, noted that the company’s investment in SWTCH is part of its Smart City Sandbox initiative, through which it is looking to “provide a bridge” between environmentally conscious innovations and “the practical needs” of its infrastructure building clientele.

“We have all sorts of unique partnerships … which are helping spur adoption,” Bryson told BetaKit, noting that working with building developers and managers from an early stage and ensuring EV charging is a built-in feature can not only help with adoption but make the energy costs more affordable with “faster” return on investment for buildings.

Li noted that with SWTCH having hit the million revenue mark at the end of 2019, the startup is currently on track to hit around $1.5 million in revenue by the end of 2020.

Traction Conference is back for another year. With two jam-packed days of in-depth talks and rapid-fire keynotes, attendees can expect to hear from Y…