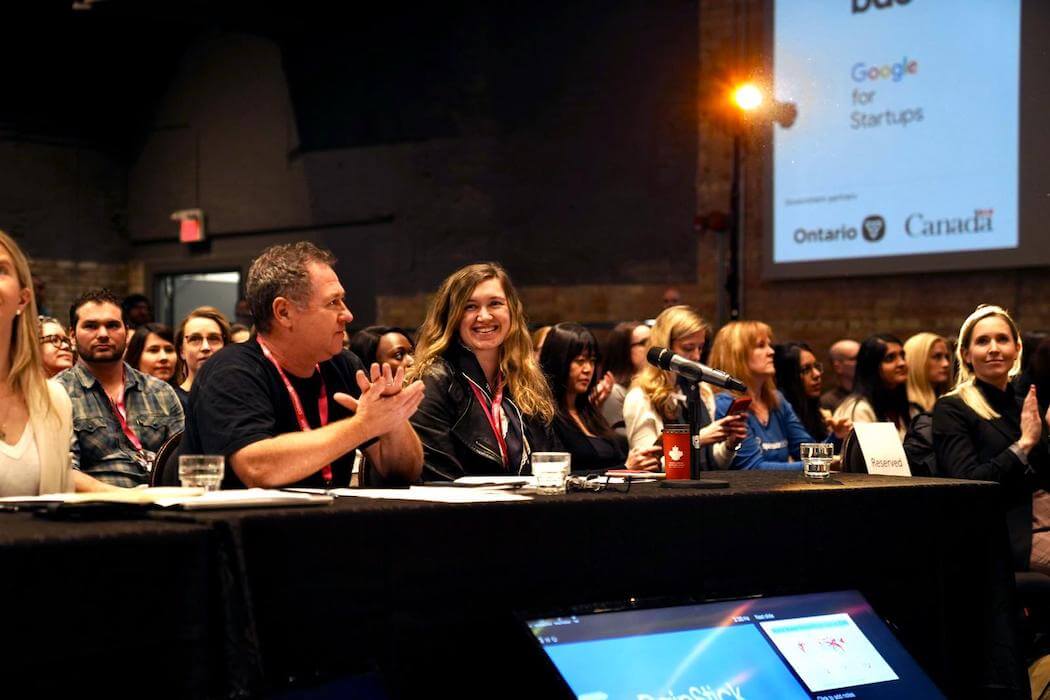 My past eight days have been a true whirlwind of launches and activity in the women entrepreneurship space. A big takeaway for me: despite the enormous strides in federal funding that have been made since I founded Communitech’s Fierce Founders for women entrepreneurs in 2014, there is still so much more work that needs to be done for women business owners to reach equity in this province and country.

The past week was filled with inspiring events that show just how far the women’s entrepreneurship space has come.

According to stats from Startup Canada, women entrepreneurs are contributing $148 billion annually and employing 1.5 million Canadians. That’s a number that is certain to keep growing thanks to the Government of Canada’s Women Entrepreneurship Strategy (WES) and accompanying $2 billion investment, which helped to fund many of the programs I visited and engaged with last week. One consistent element of all the programs is that they are federally funded and likely would not exist without that support.

From Communitech’s Fierce Founders Finale in Waterloo to the Windsor-Essex Launch of the RISE Women Entrepreneurship Network, the past week has been filled with inspiring events (including the launch of our own Dream Maker Ventures Dream Network) that show just how far the women’s entrepreneurship space has come.

Showing the work that still needs to be done, one of the most concerning comments I heard throughout the week were men expressing concern that women’s programming had reached a saturation point. This prompts some reminders on the stats: 51 percent of the Canadian population is women, however, venture capital funding for women founders is still in the single digits, and even less for women of colour. The week showcased some inspiring and hopeful steps in the right direction.

As the founder of Fierce Founders, it was a full-circle experience returning to Communitech as a final pitch judge for this year’s 2020 event. I developed the program, which aims to help women tech entrepreneurs accelerate their companies, back in the summer of 2014 after my own experience as founder within Laurier LaunchPad and Communitech. I was often the only woman in the room and the only woman recipient of entrepreneurial funding in the region. The prize-winning companies since 2014 are now cumulatively worth over $100 million in unrealized value based on their latest rounds of funding.

This year’s big winners were Alisha McFetridge of RainStick Shower for $75,000 and Rachel Bartholomew of Hylvy Health for $25,000.

Both founders told personal stories of their connections to the problems – McFetridge worked across Africa on water purification and developed RainStick, a revolutionary shower that reduces water and energy consumption. Bartholomew described her diagnosis journey with cervical cancer and has now created a suite of sexual rehabilitation products for women to improve sexual recovery, with Hylvy Health.

Communitech VP Lisa Cashmore referred to the ongoing battle to push for more women entrepreneurs during her introductory remarks, stating “the fight’s not over. We have to keep supporting programs like this to make sure that we keep moving that number.”

Keeping track of all of these new women-in-tech programs and resources can seem daunting. Chelsea Prescod, senior advisor to BDC, had the foresight to implement an all-encompassing strategy that included community discussions, roundtables, and a Resource Guide for GTA Women Entrepreneurs. Brooke Gordon has taken over and expanded this strategy, with an official launch for the resource guide last month.

The resource guide has been in the works for months, with BDC’s Gordon and Pamela Horan, regional manager of partnerships for the Ontario Region, spearheading community discussions and bringing together the organizations featured in the guide.

“I’ve been researching women entrepreneurs since the Montreal massacre, now there are fewer women in computer science and only marginally more in engineering than 1989,” said Wendy Cukier, founder and academic director at Ryerson University’s diversity institute, and a recipient of WES funding.

Cukier identified the key component at the heart of all of this work – there is still so far to go and progress is not only slow or stagnant but in some cases moving backward.

For the past month, I have spent my Saturdays with the wonderful women of the HERStartup program. Founded by Jumpstart and the Syrian Canadian Foundation (both of which are partners of the Dream Network), this first cohort has 30 women participants with refugee status. The three-month program culminated in a pitch competition for $100,000 in seed funding and access to a business consultant. A key element of the program is childcare for the participants, which was provided by Newcomer Women’s Services Toronto on those Saturdays.

Amongst all the progress and programs, the reality is, we need to do more to remove the barriers and biases that still exist for women. One key element remains – family expectations that are placed on women. Caregiving, whether raising children, providing elderly care, or any elements of domestic work, is an undeniable facet of life that falls on the shoulders of women to a far greater extent than men.

If we want to see more women entering entrepreneurship and enduring the journey to the big tech exits and IPOs, we need more examples of equity-based support.

Given the launch of both ventureLAB’s TechUndivided and York Innovation’s Entrepreneurial Leadership & Learning Alliance (ELLA) were both on Tuesday, March 3, I decided to make it a road trip around the GTA.

The day started in York Region, which is home to Markham, Canada’s most diverse city. Sourcing talent from the highest population of visible minorities, these new women-focused programs have taken an intentional, intersectional approach to community building. This is an important step towards a more inclusive tech ecosystem.

ventureLAB’sTech Undivided’s launch was particularly exciting as I had begun engaging with the team early on in fall as they developed the program (disclosure: Graham is a mentor for the program). I can already see that these founders are at the right stage to benefit from the program and I can see them scaling quickly.

“There are vultures out there and you need to avoid them. There are also pigeons – they tell you a great story and then they leave,” said Lally Rementilla, CEO of Quantius and keynote speaker at the event.“They’re harmless but they give you the long Canadian maybe. What you need to do is learn to spot the eagles. Spend time with the eagles because they have a powerful vision, they get it. They have the eagle eye, they’re fearless, they will take the first risk and they build relationships and bring in other eagles. They also nurture their young and they will teach you.”

I took the train to Windsor from Toronto in the afternoon to speak at the launch of the RISE Windsor-Essex Women Entrepreneurship Network.

The RISE Network is a coordinated effort to support women entrepreneurs and women in Science, Technology, Engineering and Math or STEM. RISE Windsor-Essex will provide details about ongoing activities, events, programs, job boards, and mentoring opportunities.

“We’re so excited to launch RISE Windsor-Essex, a hub to promote and empower women entrepreneurs and women in STEM, two very underrepresented areas in our region,” said Nicole Anderson, director at WindsorEssex Economic Development Corporation. “By bringing together and supporting all of the resources available to these women in our community, we hope to encourage more women to pursue these careers and make Windsor-Essex a more encouraging place to work as a woman.”

The RISE network can offer women in the room and the broader community, benefitting from both the regional benefits of the ecosystem and broader networks of like-minded women entrepreneurs.

That evening we arrived at York University for the launch of Ella, which has accepted over 50 women-led early-stage startups into their inaugural cohort.

“We are building a connected community of women founders, mentors, and experts focused on giving these 54 women the tools and connections they need to succeed,” said Nicole Troster, entrepreneurship manager for ELLA, which is led by York University’s Innovation York.

“The federal government’s contribution of $1.8 million to ELLA, through their new Women Entrepreneurship Strategy, is an incredible opportunity and one York University will leverage along with our government, community, and industry partners in the fight to reduce gender inequality in entrepreneurship,” Troster added.

“Our government is investing in initiatives like York University’s ELLA program, ventureLAB’s Tech Undivided, and Windsor-Essex’s RISE Network, that help women entrepreneurs gain the knowledge, tools, and connections they need to start and grow their businesses,” said Mary Ng, minister of small business, export promotion, and international trade. “Together, through Canada’s first-ever Women Entrepreneurship Strategy, we will continue to empower women to start and grow their businesses, and ensure they have the support they need to succeed.”

Mentors, networks, and capital are all critical components for any entrepreneur’s journey to be successful, and these programs offer them access to all three.

This whirlwind tour happened early on in the journey for these programs. The next step is to determine how we can support the growth of women and underrepresented entrepreneurs as they scale within their respective industries – where many of the decision-makers are also unlikely to relate to the circumstances and backgrounds of the founders.

If we want to see successfully scaling startups, we need to support them at every stage of their business growth. We need to diversify every stage of investing, especially the angel and VC stages where the investment is oftentimes focused on the founders themselves. More men need to be involved – as engaged sponsors and advocates to adjust to this new wave of entrepreneurs.

Danielle Graham is the Principal VC at Dream Maker Ventures, Board Member of GTAN, Investment Advisor for ThinkHatch and Seed Investor working to #ChangeTheNarrative .

Thomson Reuters is dedicating $124 million towards establishing a permanent presence for its technology centre in Toronto, just one year after the launch of…