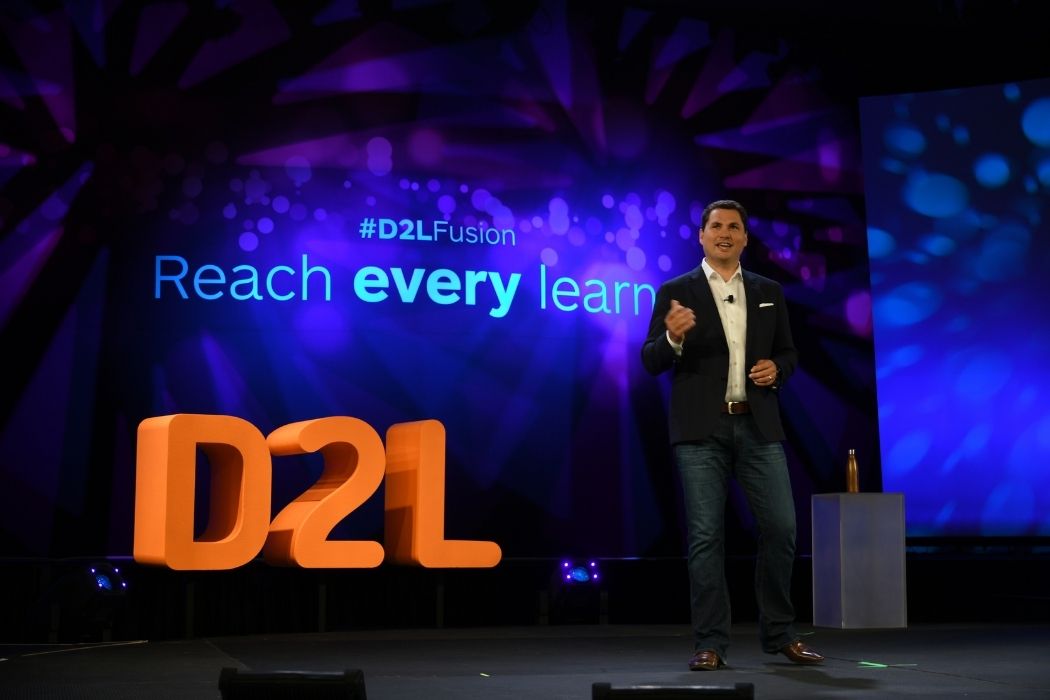 Fresh off of a recent IPO, John Baker, the founder, president and CEO of D2L, reflected on his firm’s move from a private to a public company and talked to BetaKit about the experience.

Kitchener-Waterloo-based EdTech company D2L began trading under the symbol ‘DTOL’ on November 3, generating $150 million in gross proceeds from its IPO, roughly $50 million less than it originally anticipated from the offering.

Ahead of its TSX listing, D2L reduced the size and pricing of its IPO, originally planning to sell about 9.5 million to 10.5 million shares within the $19 to $21 price range for each one, for about $200 million in potential gross proceeds.

“We’re focused on building the future of working and learning. This IPO is really a great way for us to welcome more people into the D2L family and help us achieve more.”

Was Baker disappointed with how it all went? Not at all. “I’m thrilled with the outcome,” Baker said. “I don’t think it’s easy to do an IPO, and for us to be successful in that endeavor, it’s tremendous. I’ve learned a lot. I was excited throughout the whole journey. At the end of the day, we’ve got some incredible investors who have become shareholders in D2L that believe in the long-term value we’re creating.”

Baker said: “It’s not about what happens on day one or day two. It’s about creating value for the long term that matters, and that’s what we’re doing.”

The founder noted that it’s “rare” for many companies to make the journey from a private to a public company, and he said he was grateful for all of the people who helped along the way.

“For me, nothing has changed. It’s really a continuation of our mission,” Baker said. “We’re focused on building the future of working and learning. This IPO is really a great way for us to welcome more people into the D2L family and help us achieve more.”

The company is the developer behind Brightspace, a cloud-based software platform for the delivery of courses, learning-based games, and assessments online or in-person. D2L claims that it serves 970 K-12, higher education, and corporate customers, with over 14 million users across ​​more than 40 countries. D2L’s clients include many of Canada’s universities and colleges.

Since July 2020, the TSX has seen a streak of Canadian tech IPOs. Including E Automotive and D2L, 19 tech firms have gone public on the exchange during this period, compared to 12 in the previous 11 years ending December 2019, according to The Globe and Mail. Despite this trend, the performance of recent Canadian tech IPOs has been mixed, as some, like Q4 and D2L, have been forced to cut the size and pricing of their offerings, and continue to trade below their issue price.

“We’ve got a great mandate from those shareholders to go and invest in the future, to do what we say we’re going to do, which is build a world leader in the areas of work and learning, so that’s what we’re focused on,” Baker said.

Nor does he believe that other companies should shy away from the public markets even while some of the debuts haven’t performed as well as expected. “I found the market to be receptive for a story like D2L,” Baker declared. “I hope more companies do indeed go public.”

Baker said the TSX in general is “underweight” in technology listings, and that as the world economy digitizes more leaders will be needed, and not just from native digital companies, but from traditional firms that want to digitize as well.

“I think there’s a tremendous opportunity in public markets and I hope more people do follow that path,” Baker opined.

While Baker wouldn’t offer much guidance as to what to expect from D2L in the future, noting that the firm is still in its quiet period following its IPO, he did say the company recently launched a new product.

Called D2L Wave, the new solution is described as an “upskilling platform for employers.” D2L is partnering with “top tier” universities and colleges to bring micro-credentials and programs to employers. The idea is employees could take courses in areas such as DevOps or leadership.

“It really helps those employees in their career development but at the same time helps employers go through transformation. For example, if they’re trying to become a digital company, these are the skills that are required to become a digital company. And instead of trying to build everything themselves we’re making it easy to partner with our academic clients,” Baker noted.

As well, Baker said D2L is hiring for dozens or roles, but would not disclose how large the company might become and by when.

Founded in 1999 by Baker, a then 22-year-old University of Waterloo engineering student, D2L was bootstrapped until 2012, when it secured $80 million in venture financing.

Today, the company has more than 1,000 employees around the world and retails its products in 40 countries.

With the proceeds from the offering, D2L aims to strengthen its balance sheet and financial flexibility, bolster its visibility in the marketplace, which it believes will increase its credibility with existing and new customers, and support its various growth strategies.

In terms of the latter, Baker noted the firm’s growth has been organic up to this point, but he said there’s no reason it couldn’t consider mergers and acquisitions in the future.

Approximately $20 million CAD of the net proceeds from D2L’s IPO will repay a loan the firm made to a holding company affiliated with Baker earlier this year. The prospectus states this loan was designed to cover $16.6 million in outstanding income tax liabilities connected to a 2012 share distribution that included three of Baker’s siblings after a 2016 audit by the Canada Revenue Agency. The siblings must also pay $3.6 million in relation to the exercise of D2L share options.