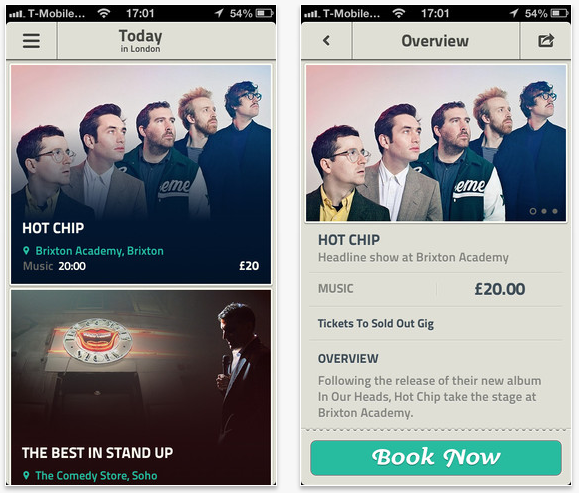 Although some people like to plan out their social activities well in advance, whether weeks or months ahead, UK-based YPlan wants to provide a mobile-only event booking app for those who prefer to put things off to the last minute, or in this case as little as 24 hours prior to an event. The startup officially launched its services in London this week and announced today that it has raised $1.7 million in its seed round from Wellington Partners, a firm that previously invested in Hailo and Spotify, and Octopus Investments, as well as BaltCap and several angel investors. The company will be using the funding to add to its product development, marketing, and sales team, in addition to expanding outside of the UK.

“It’s a last-minute going-out app, super simple, slick, beautiful and it closes the loop. So you can get inspired by a cool event, book in two taps or pay in two taps, and go, literally you don’t need to do anything else. You don’t need to call, you don’t need to print, you don’t need to wait,” said co-founder Rytis Vitkauskas in an interview with BetaKit. “The booking process takes less than five seconds if you have a good connection and takes two clicks on your app. Every day we will feature a full range of events, from gigs to theatre, to cinema, to wine-tastings.”

The company’s iOS app curates and shortlists up to 10 events per day for users to browse. It works with partner event organizers, promoters, venues, and others in the event management space to secure a certain amount of tickets, all in one section (if it’s a seated event) at a set price, so users don’t need to think about where they will be sitting. The first time someone uses the app it asks them for basic information and their payment details, and every time they book an event after that they can book an event in two taps.

“We want to do one thing really well and that’s providing you a curated list of cool events and really just allowing serendipity to happen in your life. You may be sitting there at your desk at one point and check YPlan and go see a Marilyn Manson gig that’s going on in London,” Vitkauskas added.

The company wanted to avoid adding fee to each ticket booking, and instead it offers a flat rate which the customer pays with no added fees, in some cases offering discounts on events or access to sold-out events. The company takes a cut of each ticket sold through the app, with the exact percentage varying across different verticals.

Although the company goes head to head with larger ticket booking providers that range all the way from Ticketmaster to Eventbrite, with plenty of smaller players in between, YPlan’s value proposition according to Vitkauskas is providing event organizers access to customers who would most likely have missed the event or never have found out about it were it not for the app.

“If you’re running an event at a big venue…it may well be the case that the day before the show you may have a few hundred tickets left. There’s currently not a channel that will help you get more people through the doors, because frankly people stop buying online a few days before the show because they don’t have the trust the tickets will be delivered to their homes and they don’t have the habit of doing that online. Mobile on the other hand is exactly the channel to reach those customers,” Vitkauskas added.

Right now the app is only available on iOS, with the company looking to add Android once it has built up traction on the iPhone app. It also has its sights set beyond London with expansion plans including the U.S and other cities in Europe. With last-minute booking apps like HotelTonight seeing huge adoption both among companies trying to get rid of last-minute stock and consumers looking for a better price, YPlan should be able to capitalize on people looking for last-minute deals. But part of HotelTonight’s appeal is the discounted rates – only some of YPlan’s events are discounted, so they’ll need to figure out a way to make the ticket price is appealing to event organizers and consumers in order to build up critical mass.

“Wearable technology is really rooted in the human experience,” said Tom Emrich, founder of We Are Wearables and BetaKit senior editor. “And our human…