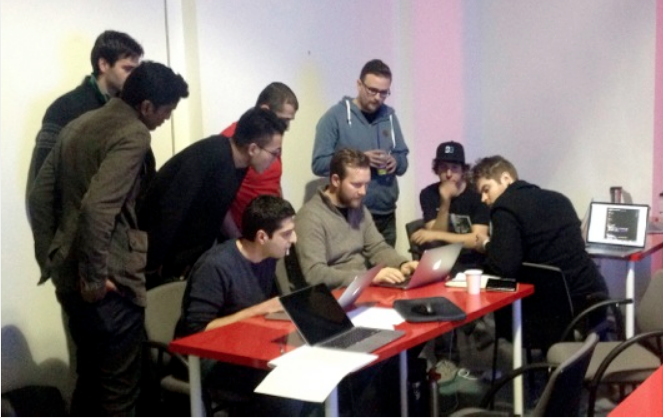 Demand for software developers in BC today is robust. Looking no further than T-Net which is showing almost 850 job openings in engineering software and tech space. The market is definitely tilted in the developers favour.

For someone looking to start their career or hone their web development skills, Vancouver’s CodeCore is offering the opportunity to get there in a variety of ways.

Cofounders Tam Kbeili and Jay Holtslander have been working together since 2008 with Holtslander handling the front-end/design work and Kbeili doing the Ruby on Rails back-end. For them the theme of education kept repeating itself, so in January 2014 they took the leap of faith and welcomed their first official class to CodeCore.

“As an experienced Ruby Developer I get job offers frequently. However, education is something that has always driven me & Jay. There is a need for an alternate form of training for developers is clearly present in the market and we’ve been doing it in Vancouver for 5 years,” said Kbeili. “Whether it’s for iOS, Web or advanced classes like Scala, we’ve found that hands-on training that’s intensive better stimulates a development environment when compared to traditional educational methods.”

They offer intensive 8 week programs for both Ruby on Rails (next class starts May 19) and starting July 14 one of Western Canada’s first boot-camps for iOS. As well, they hold part-time classes in key subject areas such as Scala, WordPress and Front-End Development.

It’s worth noting Code/Core is CodeCore is recognized by the B.C. Ministry of Advanced Education as a PCTIA Registered, Certificate granting, and a fully insured institution under it’s Better Business Bureau Accredited. They’re also a member of the BC Technology Industry Association.

For Holtslander, he also sees CodeCore being a developer hub. “As a company made of professionals who all got their starts as developers in Vancouver, we wanted to give back to the community through CodeCore,” he said. “In the first few months alone we’ve hosted many events which all have one thing in common, they were focused on providing a space for Vancouver’s developers to share ideas and hence help build a tighter knit community. In the long-run, events like HackerNest Van, Lightning Talks and Meetups also help our students to meet the community so we’re happy to host them free of charge”

For students as much as the education is crucial, CodeCore has formed partnerships with companies such as Samsung, Amazon, Hootsuite, Sage, and BMC. They’re also involved with organizations such as Simon Fraser University, and Canadian Women in Communications. In addition to partnering with industry for Grad placement opportunities and sponsorships, CodeCore is working with Government agencies to train people who are unemployed due to skills gaps and helping fill jobs through Service Canada and WorkBC.

Ultimately it’s what the students think about a program that validates everyones effort and commitment. According to Andrew Ogrezek,  a graduate from the Rails Bootcamp, “I’d had some experience with web development, and had been trying to push myself to that next level. They are equally committed to making sure that everyone who tries actually gets the concepts, and puts them into action. In my few weeks I’ve learnt that anyone can do this with help of instructors who have patience and depth of knowledge.”

And for Yuyu, a 16-year-old High School student who did the part-time Fundamentals Course, “there aren’t many opportunities around where I live where a high school student like me could learn programming. When I saw CodeCore’s advertisement, I was very excited. I thought: Finally! I could learn how to program from professional instructors. I applied immediately. I knew the chance of my acceptance was low, (since I was still a high school student), but I applied anyways. By attending Codecore Fundamentals, I felt a step closer to my goal.“

Helping people take that one more step to achieving their goals counts for a lot. Getting started as a junior developer can’t help but open up a future of great potential career opportunities as well.

Recently, BetaKit teamed up with Canadian startup Frank And Oak to give our readers staying up-to-date on the latest in retail tech via the…