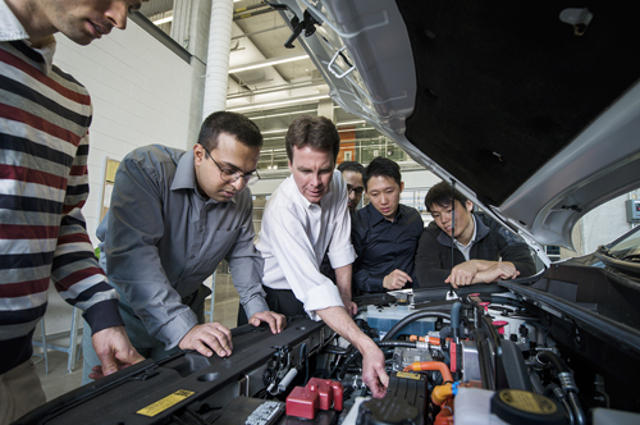 A new research and testing facility opened today at the University of Waterloo to look into building cleaner, smarter vehicles.

The Green and Intelligent Automotive (GAIA) Research Facility, which is the most recent addition to the Waterloo Centre for Automotive Research, is a partnership between the university and the federal and provincial governments. The 4,000 square feet facility, worth $10 million, will house automotive equipment and three labs to allow 150 faculty and graduate students to test, modify, and identify issues with electric and hybrid vehicles.

“Now’s an exciting time for Canada’s automotive industry as it shifts towards the smart electric vehicle,” said Gilles Patry, the president and CEO of the Canada Foundation for Innovation. “This world-class research space will make Canada a leader in the evolution of the connected car and will help produce a new generation of automotive engineers.”

Researchers will use the facility to look at various aspects of improving electric and hybrid cars such as developing longer-lasting batteries, reducing emissions, and optimizing fuel consumption. The faculty and students will also focus on making the facility a testing track through which they can test vehicles and their individual components safely in one area. Through GAIA Research Facility’s unique design, which integrates three components — batteries, powertrains, and an instrument that measures the power of an engine — researchers will be able to simulate real-world driving. This integration gives researchers a reliable way to test individual components and entire vehicles in one area.

“The fact that we can do all of this in one facility is incredibly powerful and very unique,” said Professor John McPhee, who is the head of the facility and a member of the department of systems design engineering. “By the time we graduate our products from GAIA, we’ll be doing very minor tweaks to systems that are near production-quality.”

In late April, the Canadian government announced that it was also dedicating $3 million to four projects from companies across Canada developing technology for smart vehicles.

Photo via University of Waterloo

American transportation network company Lyft announced on November 13 that it will expand to Canada by the end of 2017. Lyft will first service…