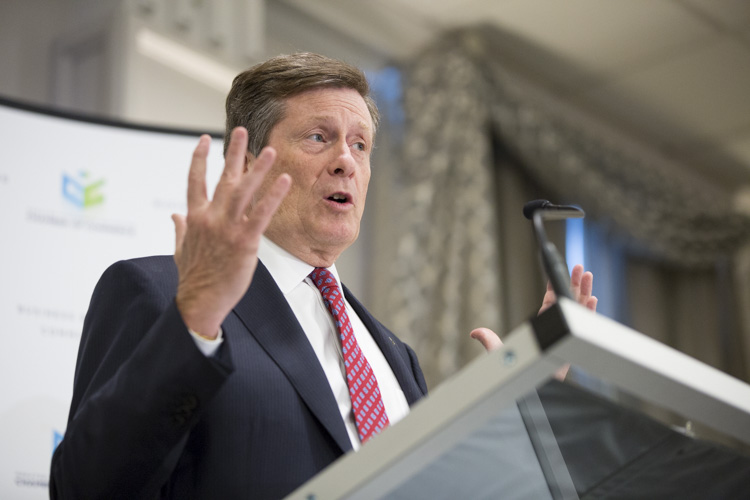 On Wednesday, March 23, Tory visited Waterloo Region with a similar agenda: to debut a strategy to promote the Toronto-Waterloo Corridor as a global hub for technology and innovation, and reveal plans to participate in a joint trade mission to San Francisco to bring talent, investment, and business back to Canada.

The day began with a meeting with the mayors of Kitchener, Waterloo, and Cambridge, Regional Chair Ken Seiling, and a group of leaders from local tech companies to discuss opportunities to build and support tech along the Toronto-Waterloo Corridor.

Tory’s visit to Waterloo Region also included a tour of the Communitech Hub, Google’s new office, and the University of Waterloo Faculty of Engineering. Widely regarded as leaders in innovation, research, and education, these institutions are instrumental in the development of our knowledge-based economy.

“I hear about these institutions with pride everywhere I go.”
– Toronto Mayor John Tory

These institutions are mirrored on the other end of the Corridor in Toronto with universities like the University of Toronto, home of the highest number of PhDs in the world, and researching areas like artificial intelligence and machine learning. Other institutions like Ryerson, York, and Sheridan offer business and creative programs that augment the Corridor’s growing tech industry.

At the Greater Kitchener-Waterloo Chamber of Commerce, Tory began with a clear message. “The real competition is not between Toronto and Waterloo Region, but rather between this entire Corridor and the rest of the world,” he said.

Mayor @JohnTory on KW and Toronto: It is an urgent priority for us to work together. #topoli #onpoli pic.twitter.com/FDptZAsCma

As a partner in the Toronto-Waterloo Corridor, Tory and the City of Toronto’s aims to work with Waterloo Region to establish closer ties so every party involved can grow and prosper within the Corridor.

“The partnership between Toronto and Waterloo Region will be the rising tide that will lift all boats.”

In order to achieve this, there is one issue that needs to be addressed: transportation. As previously voiced by the mayors, an improved transit and transportation network is key to the success of the Corridor. This will accelerate the flow of people, ideas, and goods along the corridor, helping to bring Toronto and Waterloo Region closer together.

With @GKWCC's Ian McLean beside map showing similar distance from TO to K/W & San Francisco to Silicon Valley. pic.twitter.com/tkOJVmuGHS

The relationship and distance between Toronto and Waterloo Region is similar to other global innovation hubs like San Francisco and Silicon Valley, London and Cambridge, and Tel Aviv and Haifa. To many, the Corridor is already regarded as a world-class innovation centre with the second highest startup density in the world (second to Silicon Valley), 423,000 students across 16 post-secondary institutions, 200,000 tech workers, and 15,000 tech companies. Along with a reputation for being the world’s most diverse country that gives Canada first-hand understanding of foreign markets and a global network of connections, all of these points set the Toronto-Waterloo Corridor apart from other innovation hubs across the globe.

Illustration of key demographics, assets, and companies from the Toronto-Waterloo Corridor.

Toronto-Waterloo Innovation Corridor in comparison with other global innovation hubs and regional innovation clusters. Notice that we are the only cluster without the word ‘silicon’ in it.

These postcards are samples of new marketing material to be debuted during the Mayors’ joint trade mission to Silicon Valley on April 4 that will put a stake in the ground and draw the attention of the world towards the Toronto-Waterloo Corridor.

The objectives of this trade mission include opening a dialogue with companies in Silicon Valley to expand their offices and investments in the Corridor, meeting with venture capitalists to encourage investment in later-stage financing to help established companies scale and grow, and attracting talent. With over 300,000 expats currently working in the Valley and the promise of refuge from a certain presidency, this is an opportune time to make this pitch to convince skilled knowledge workers to come to Canada.

Mayors Tory and Vrbanovic will also be present at the CityAge conference in San Francisco where Tory will be delivering a speech about the Toronto-Waterloo Corridor and Vrbanovic will be participating in a panel discussion called ‘Building an Innovative City’.

“This Corridor is doing amazing things, in a uniquely Canadian way, and we need to trumpet our strengths and our goals everywhere we go.”
– Mayor Tory

The call-to-action that Tory left every Canadian with is this: become advocates for the Toronto-Waterloo Corridor. Be uncharacteristically un-Canadian and brag about the Corridor. Tell everyone that we have big plans here, that the two powerhouses, Toronto and Waterloo Region, are working together, and that the entire Corridor is capable of taking on the world.

For more information on why talent and businesses should choose the Toronto-Waterloo Corridor, visit thecorridor.ca.

Karel Vuong is an Associate at Sagard Holdings and is based in Toronto. In his role, Karel serves Paul Desmarais III in various mandates and special projects as a member of the Office of the CEO. He also leads branding, communications and ecosystem development across each of the platform's strategies (venture capital, private equity, private credit, and healthcare royalties). Prior to Sagard, Karel joined Diagram as its first employee to launch a $30M fund and venture builder co-founding companies in insurance and financial services, primarily working with Dialogue and Collage (exited). Karel began his career as a software developer and product manager in Toronto, Waterloo, and the San Francisco Bay Area. An impassioned convenor and bridge builder, he has organized events that has been attended by heads of government, CEOs, and senior leaders from around the world. Karel studied Computer Science at the University of Toronto - Trinity College.