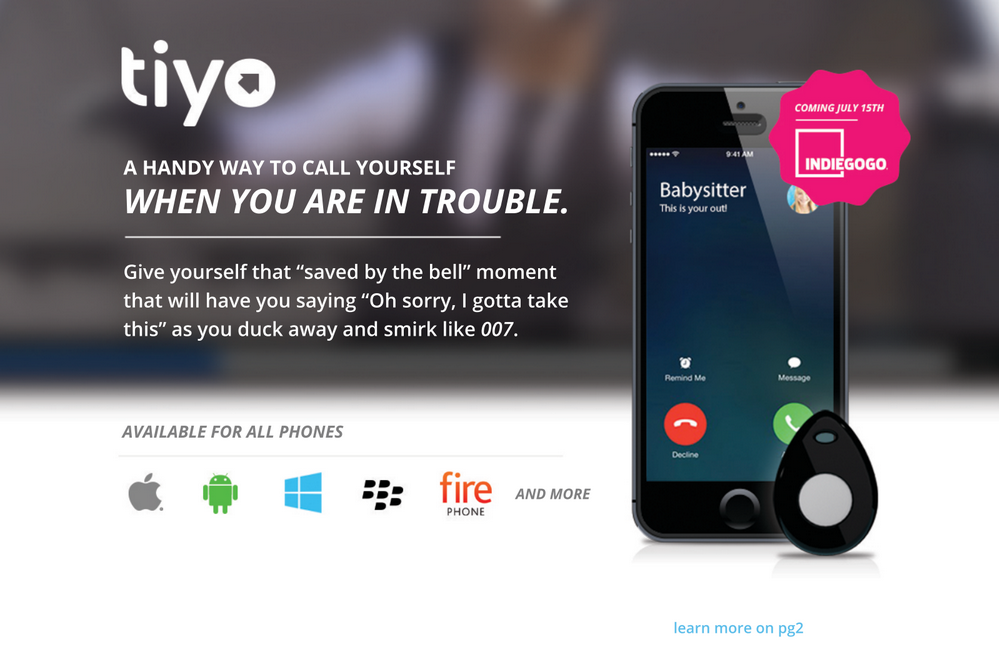 Vandelay Industries’ George Costan…I mean Waterloo entrepreneur Ivan Lukianchuk has launched a new solution that can get anyone out of a bad date. Using bluetooth technology, the keychain-sized device calls any phone with the touch of a button, effectively getting one out of any situation they don’t want to be in.

I’m not quite sure whether to throw this one in the “our future generation will be socially inept” bin or the “whatever, it’s kind of funny and useful” bin. Regardless, the new piece of hardware hit Indiegogo today with a goal of $100,000. The “TIYO”, made by This Is Your Out will be priced starting at $35 USD with free shipping in Canada and the US.

“We’ve all been there: boring meetings, bad dates, awkward parents, grocery store run-ins with people you can’t stand, chatty co-workers who can’t take a hint, and the list goes,” wrote Lukianchuk. “This Is Your Out has created the TIYO, a simple hardware solution to all of your grief inducing, time sucking moments. A single push of a secret button will manufacture your own ‘saved by the bell’ phone call that’ll have you saying ‘Oh sorry, I gotta take this’ and escaping with glee.”

Lukianchuk formerly founded WillPwn4Food, which gained tons of momentum in 2012. At last year’s International Startup Fest, he was crowned winner in the Onstage Pitching Contest.

TIYO is even equipped with a number of “repeat-after-me” scripts so that when you need to hit the panic button you don’t have to concentrate on making a good excuse, simply repeat the lines and sound convincing. For added realism you can even customize the caller ID. One might wonder whether the amount of effort exerted to go through using such an ingenious method might be greater than simply telling someone that you don’t want to talk to them anymore, but hey, this is 2014 and we don’t talk to each other anymore anyways!

So why did Lukianchuk go through all the pains to come up with this lovely new device? “My wife works for an insurance company and has to work with their sales rep. She is unfortunate enough to be stuck with a rep who never stops talking,” he said. “It’s so bad that on a visit to their office she discovered the other employees had a protocol to deal with him. If he was in someone’s office for more than 10 minutes you would call the victim or else the rep would never leave.”

Backers get 25 free calls with the device and if they run out they can easily top up in a pay-as-you-go fashion or by purchasing call packs at a discount.

The TIYO is compatible with all smartphones including the new Amazon Fire phone as well as feature and flip phones. No app is required to use the device and it will work in any country. Lukianchuk also releasing an API so developers can program the Bluetooth button to do whatever they please.

Uber has deployed two autonomous cars to the streets of Toronto for testing, although only with human drivers behind the wheel. Company spokesperson Susie…