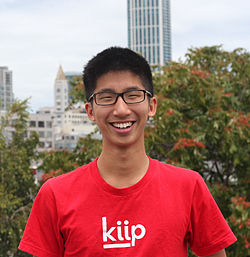 Vancouver’s tech “child prodigy” and Kiip (Founder & CEO) Brian Wong swung through town on his way to SXSW, when Startup Grind Vancouver hosted him for a fireside chat.

Wong isn’t one needing much of an introduction. He has the distinction of graduating from high school at 14, and then graduating from UBC’s Sauder School of Business at 18.

Since founding Kiip in 2010, he and the company have received no shortage of attention. It goes with securing over $15 million in venture funding essentially before being of legal drinking age at his own San Francisco HQ. Wong’s made numerous lists like Forbes 30 under 30, and lent commentary to Frontlines recent documentary “Generation Like”.

Even without free beer and snacks he would have packed the house. True to form, Wong was high energy, entertaining, brutally honest and shared some great startup up stories and lessons. Actually, he shared more than just business insights. There’s the unique and very little known fact behind his onetime childhood visit to Albuquerque, NM, as he shared that “I was in a boys choir. Before my voice changed, I sounded like an angel.”

The Digg experience lasted five months. The layoff meant losing his H1B Visa, and having to fly back to Vancouver.  “It was in May, and I told my Mom what happened. She told me it was the worst Mothers Day present she’d ever got. Every Mother’s Day since I try making it up to her with some kind of nice surprise.”

It proved to be a minor setback, as he grabbed a business tourist visa figuring he’d easily hook up with a new company in that six month window. Wong turned conversations about working for others, into validation for starting Kiip. He said, “after telling Scott Kveton the founder of Urban Airship in Portland my idea, his job offer turned into an introduction to True Ventures.

The genesis for Kiip came from Wong observing people’s mobile game play and “trying to recognize when people are happy, and reward them. But reward them serendipitously.” He credit’s reading the book “Predictably Rational” with building his business around the idea that there’s value in “surprising and delighting people.”

In terms of winning those first customers, Wong noted how important it is to pick your initial investors wisely. “They can help you with a lot of nepotism, and finding relationships where they can just help seed the business. Having investors who were part of the Popchips, and Vitamin Water teams helped with them becoming our first customers. It also helped with bringing other big brands on board.”

He’s also a big believer in always telling people what you’re doing all the time. “It’s awesome, and not about having a big ego, over-sharing, or boasting. It’s about sharing your stream of activity and consciousness so that people will know how to help you. You need to figure out how to generate serendipity in your life. You never know who will help you. You’ll never get any help if you’re not constantly communicating what you’re doing.”

In terms of succeeding as a startup outside of “The Valley” Wong was adamant saying, “the world’s a different place today. There’s Kickstarter, Indiegogo, Angel List, and so many organizations like Startup Grind, and the likes of Y Combinator and TechStars there to help you. You can start something anywhere. There’s a thing called a plane. If you really want to find your customers you’ll find them. Using location as an excuse is lame”

There’s no shortage of evidence that points to Wong knowing the value of PR. “Those people who shit-talk PR don’t understand it’s a tactical tool. It’s great for validation, customer acquisition, for information. Why send someone a slide-deck, when you can send them an article that tells them your story?”

He’s most excited about  “looking at data from connected devices. It’s not creating a brand version of something for FitBit. That’s useless. I think one of the biggest opportunities will be looking at moments that come from those devices. We create a currency that’s universally applicable beyond just apps. I envision an internet connected scale saying you’ve lost five pounds, and then having Special K reward you for that moment.”

The youthful exuberance combined with serious business experience left some of the audience needing to catch their breath. It’s evident that no matter what’s thrown at him, Wong’s someone who’s always looking on the bright side of life. Entrepreneurship isn’t easy so it’s worth keeping the life of Brian in mind.