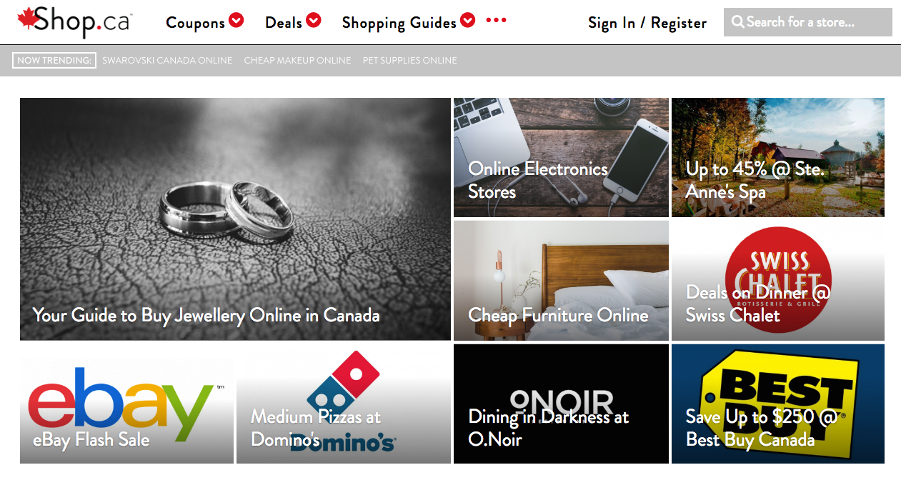 Shop.ca has relaunched its platform with a focus on providing coupons alongside retail content and shopping guides.

It’s a departure from Shop.ca’s original model, which acted as a marketplace between consumers and merchants. BetaKit first reported the company had filed for bankruptcy in July 2016. Documents obtained by BetaKit at the time indicated the company had been attempting to find further financing or sell the business since August 2015.

“The new Shop.ca is a departure from the brand’s original pure-play ecommerce marketplace model.”
– Ghassan Halazon,
CEO of EMERGE Media

Following mass layoffs, Shop.ca’s assets were eventually sold to Transformational Capital (now EMERGE Media), which has also acquired ecommerce brands like WagJag and Buytopia. EMERGE’s stated mandate is to focuse on acquiring brands that have active customer databases, but lack the resources to scale.

“The new Shop.ca is a departure from the brand’s original pure-play ecommerce marketplace model, traditionally a low margin business,” said Ghassan Halazon, CEO of EMERGE Commerce. “Instead of competing with Amazon and other major retailers, the new Shop.ca drives two million Canadians to the best deals available around the web on a high margin affiliate basis via our curated editorial and deal sourcing team.”

Halazon said that the company is building a model he calls ‘content meets commerce’. Shop.ca’s homepage is filled with shopping guides (containing affiliate links) or articles outlining coupon codes for brands such as Best Buy, Swiss Chalet, and Domino’s Pizza, among others.

“[We’re] effectively leveraging the content side of the business (Shop.ca) to cost-effectively drive high traffic to our ecommerce businesses, among other deals around the web,” said Halazon. “In parallel, we leverage our deals ecommerce brands, Wagjag and Buytopia, to drive our Canadian members to our higher margin affiliate and advertising business.”