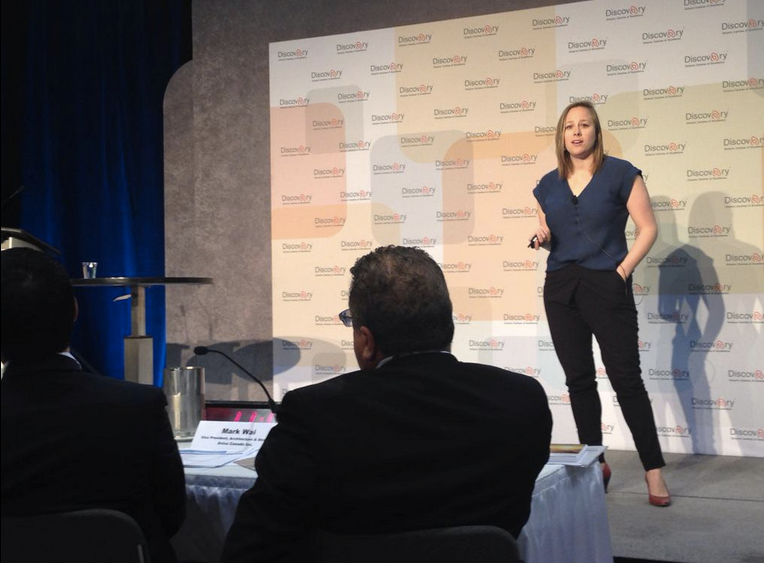 When it comes to the gender imbalance in tech, the numbers still aren’t pretty. Investors are twice as likely to invest in men, even when the pitches are identical. Only 15 percent of private equity backed teams have a woman on the executive team and just 2.7 percent have female CEOs. People invest in other people who are like them – and since most CEOs are male, you’ve got a self-perpetuating cycle built in that’s hard (but not impossible) to break. Given these hurdles, you can see why some women think twice about founding a startup – or even why some men hesitate to join a female co-founder.

I’m here to tell you it’s not all bad news out there for women in tech.

From personal experience, I know that being a female founder of a tech company can be a competitive advantage.

As demotivating as those numbers above might be, those women who strive to punch through the barriers and compete with the rest can turn the tables.

Being different means you get noticed

My male business partner and I have pitching skills that are on the same level, but I am almost always the one to pitch to groups. Why? Because I stand out.

The first time we realized this trick was the night before a pitch competition. We looked at the list of presenters – seven men – and decided that I should pitch.

We won the competition – the prize was a $25,000 check. It was a game changer at that stage in our company.

Being a woman by itself wasn’t the difference – but women can bring a different kind of energy. We perceive things differently. We often have a warmer approach to engaging with a pitching audience. It’s about giving less of a strictly business approach and more about telling the story of your company. That’s how I was able to build a stronger connection with the judges.

Another difference I’ve noticed is that women pitching their startups tend to be more accepting of feedback. Maybe that’s because without a testosterone-fed ego, we perceive that feedback as less threatening. I can only speak to my own experience and what I’ve seen at these kinds of events, but if you can answer questions with a more collaborative approach, you can build a stronger rapport with the judges.

Tech organizations are increasingly recognizing the value of diversity in founders – and the timing is right for women to pounce on that opportunity.

For instance, there are many Angel forums that invest exclusively in women founders, like the Astia Angels network.

I got the opportunity to pitch to them after winning the Vinetta Project pitch event in 2015. Vinetta partnered with the Canadian Consulate in New York to provide a prize of an all-expense paid trip to New York for pre-arranged meetings with angels, VCs and influencers. The next week I was at Collision Conference thanks to the free tickets they offer to female founders.

Event organizers are generally pretty purposeful in representing diversity at tech conferences, in panels and in media articles. As there are fewer women to reach out to, I am disproportionately invited to participate, which means more exposure for my company.

Being at conferences is great, but as any founder, male or female, can tell you, business really happens at the VIP dinners and parties. Given the known gender disparity, savvy event organizers are often keen to get women entrepreneurs in the door. There are more open doors than you might think, if you know when to ask.

Take gender out of the equation where you can

Simply identifying as a woman in social media or gaming carries risks that don’t entirely disappear when you’re conducting business online. But as the hosts and users of countless online dating sites and chat rooms have discovered to their chagrin, it’s easy enough to obscure whether you’re a man or a woman online; smart women in tech can use that knowledge to their advantage to reduce the risks of an arbitrary backlash from a prospective customer or investor.

For instance, in email, I ways sign off as Nat, not Natalie. That simple solution has helped keep countless conversations where they should be, on a professional level. By the time I get that person on a phone, there’s already a level of trust built in.

Diverse approaches to managing are better for the company

Men and women can have a different energy not just at the pitching event, but also while at the office, working with the team.

My approach has always been to find the best people and get out of their way. That involves finding people you can trust, hiring right and being comfortable delegating. In my experience, many women founders and co-founders operate in this way. In contrast, men who entered the tech world through the male-dominated world of coding often have a more hands-on approach that at the extreme can lead to micromanagement – something that all managers, male or female, have to avoid. As a result, women in executive roles are often run teams that are more at ease in their jobs and able to be more productive.

My male business partner might be more likely to close investment for Payso, but having a female founder on the team also brings a lot to the table in terms of opportunity, access to different investment vehicles and visibility. Thanks to having a diverse co-founder team, we get to leverage the best of both worlds.

Natalie Cartwright is the co-founder of Payso, a Vancouver-based technology firm that makes it easy to collect payments from friends and groups.

Uber has deployed two autonomous cars to the streets of Toronto for testing, although only with human drivers behind the wheel. Company spokesperson Susie…