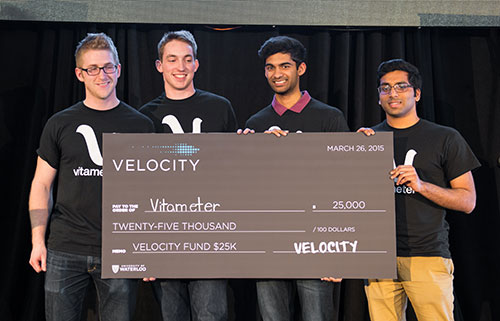 “I feel sorry for our judges,” said Mike Kirkup, upon addressing the crowd at Velocity‘s Fund Finals pitch event in Waterloo last Thursday. It is a familiar refrain from the Director of the University of Waterloo’s entrepreneurship program during these tri-annual events, but has never been truer.

"This was undoubtedly the best 5k (pitch competition) we've ever had." @mikekirkup #VelocityFund

VFFs are often bottom-heavy, as the 25k teams anchor the event with honed pitches and established identities. This year, it was the 5k startups who sucked the air out of the room, with uncompromisingly bold pitches. The 5k winners featured pitches for a standalone system that can function as both a bed and a wheelchair (CareChair – Best Pitch winner), a time-released drug delivery capsule (Kue – Most Innovative winner), and a platform for custom-fit compression garment for cancer survivors suffering from lymphedema (Node – People’s Choice winner). The 5k cohort also included teams working on transdermal patch to reduce post-operative issues (NERv), a 3D printer designed to make organs to help surgeons prepare for surgeries and reduce preventable deaths (Ourotech), and a retainer built with special sensors to help the disabled (Tongo). Oh, and a backpack that can turn into a hovercraft (seriously).

Many of these 5k startups are only a few months old, and must still learn how to become companies in addition to validating their products, but rarely does an event contain a portfolio of startups truly swinging for the fence with ideas designed to make a real impact on the world.

It’s notable that the majority of the 5k startups come from the Velocity Science and UW Mechatronics programs. Clearpath CEO Matt Rendall recently spoke to BetaKit about the unique advantage the Mechatronics program provides young engineers. At the VFF I was able to ask Harry Gandhi and Ashutosh Syal, co-founders of Medella Health and EyeCheck, respectively, just how a year-old program is able to produce entrepreneurs willing to tackle big things.

“They’ve touched on the frontier of every single technology that’s been introduced in the last five or six years.”

“The success stems from a few things,” Gandhi said. “One is the co-op program. Some of these people have worked, four, five, six times before starting their companies. They know how companies work, they know what the problems in the industry are, and they know how to address them. That coupled with all the work they’ve done in school, all the business talent, all the engineering talent, that’s really hard to replicate.”

Gandhi indicated that this was an advantage that extended beyond Velocity Science and into the University of Waterloo more broadly, a point on which Syal agreed.

“To speak to the Mechatronics point specifically, when you have a program that’s so interdisciplinary from day one, you end up having the cohort that you see here,” Syal said. “They’ve touched on pretty much the frontier of every single technology that’s been introduced in the last five or six years. They’re all nascent technologies on the cusp of something big as well, whether that’s 3D, nano or, whatever. All of them get to touch it day one.”

Both Gandhi and Syal reinforced the notion that the network of entrepreneurs available through Velocity and UW is another unique advantage – that it pays to see a company of peers six months ahead sitting across from you. The 5k startups will have two very strong examples to follow in Suncayr and Vitameter, two Velocity Science startups who were able to learn from defeat at the last VFF to land $25,000 cheques this time (Vitameter also took home the $10,000 hardware prize). Along with Pout and FotoFox, the 25k winners were notable for having 75% of its teams feature a female co-founder.

In an interview last month, Suncayr CEO Rachel Pautler explained how the Velocity program produces its network effects. “In Velocity, the community is very much like, ‘try something’,” Pautler said. “‘If you do it wrong, we’ll tell you how to do it better next time.’ That’s fantastic for pitching and other things as well.”

Pautler also expressed that she knew exactly what she’d have to do differently to win at the next VFF. Turns out she was right.

R|T: The Retail Times – The Airbnb of pop-ups