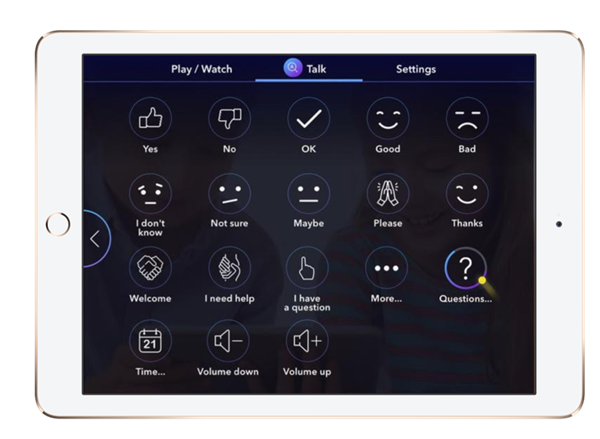 “With AI the more data we collect, the more accurate [we are]…at identifying individuals with disorders and tracking progression.”

Pigio uses AI-powered mobile software technology to allow paralyzed or intubated patients to communicate with eye movements. The app will be marketed to local Montreal hospitals and is set to be deployed in the US at a Boston, Massachusetts hospital, as well as healthcare facilities in California.

Innodem Neurosciences said the app is also expected to be available on the Apple App Store in spring 2019. The app itself is free, with more advanced in-app features starting at $39.95 per month or $360 for a yearly license.

Users will be able to control a cursor on the screen with their eye movements and select pre-defined sentences and words displayed on the screen, which will then produce an audio output. The app can be used with tablets and smartphones that come with a standard camera. No other hardware is necessary.

Innodem Neurosciences, a startup that came out of McGill University’s Montreal Neurological Institute and Hospital, focuses on developing eHealth solutions for patients with neurological disorders. It is also currently part of Centech, a Montreal-based tech incubator and accelerator.

Innodem said that further applications of its technology may assist in detecting subtle eye movements found in neurological disorders such as stroke, Lou Gehrig’s Disease, or multiple sclerosis.

“Eye movement data can be used as sensitive biomarkers to assist healthcare professionals in detecting several neurodegenerative illnesses prior to the onset of more pronounced symptoms,” Innodem founder and CEO, Dr. Etienne de Villers Sidani said. “The interesting thing with AI is that the more data we collect, the more accurate Pigio will become at identifying individuals with disorders and tracking their progression.”

The company believes its tech could be valuable to physicians and pharmaceutical companies designing treatments.

The Canadian Internet Registration Authority (CIRA) has released its 2018 CIRA Cybersecurity Survey, which looks at the state of cybersecurity in Canada. Alarmingly, the…