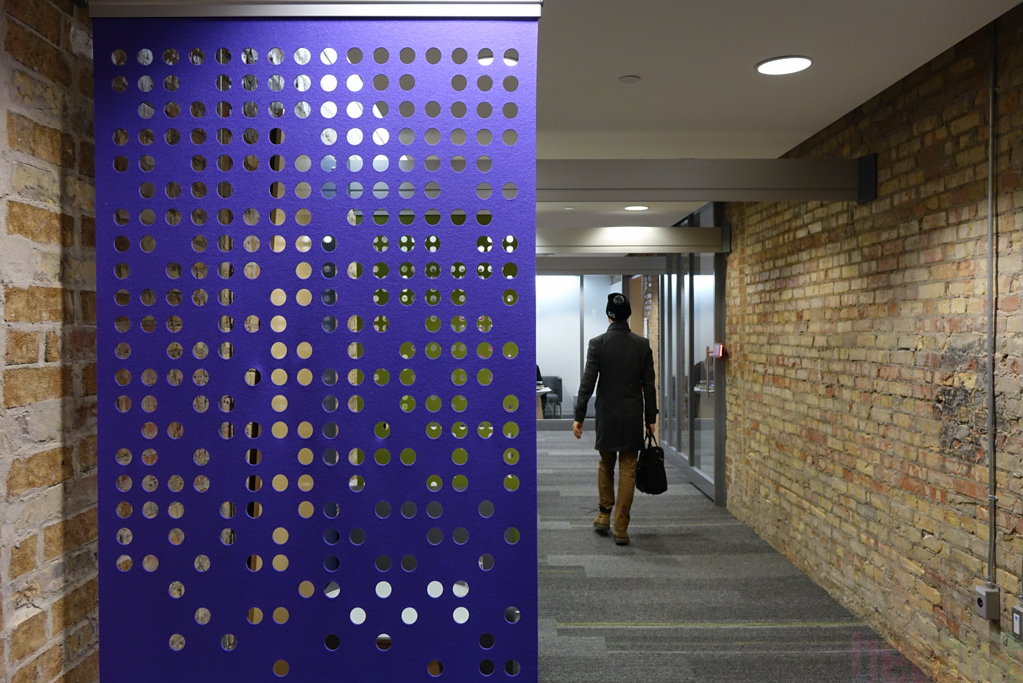 “This is a great space. We lobbied hard to get here.”

I’m sitting across from Eric Riz, founder of Empty Cubicle, in the boardroom of MaRS’ new co-working space, District 20. A 6,000 square foot section of the MaRS Heritage Building (in what I’m told is rumoured to be the old Toronto General morgue), District 20 blends 20th century facilities with 21st century function in a way most have come to expect from the innovation hub. The sandy-bricked space is filled with colour-coded, pod-like offices; minimalist yet comfortable furniture lines the hallways and common areas, which feature private booths for phone calls or a quick break-out meeting. The space feels warm and professional.

“We wanted the recognition of being a MaRS-connected company.”

But Riz isn’t talking about the space as an office, or at least not entirely. He’s talking about it as an extension of MaRS. MaRS has a mixed history convincing startups to take residency in its space. Riz is frank in his contrarian opinion.

“There’s hundreds of companies that just want to be connected to MaRS from a client perspective, let alone have space here,” he says. “One of the reasons why we wanted to be here, is that as a new company we wanted the recognition of being a MaRS-connected company. It’s amazing to stand on a stage in Barcelona and say MaRS and have someone recognize what that is.”

Riz’s perspective on MaRS’ global recognition is accurate but atypical amongst early-stage startups. That’s because, as Riz puts it, “I’m a little closer to 40 than I am to 20.” With close ties to Microsoft, and having exited two companies prior, Riz has the experience to recognize the opportunities MaRS can provide to a company hoping to build a worldwide SaaS product.

The theme of experience runs through the six companies currently in residence in District 20. While most are early-stage, with a handful of employees but products not yet launched, they are mainly comprised by ‘grey-hairs’ as Riz puts it – founders with past experience building companies and who understand the hurdles. The mixture has fostered a temperament to District 20 that is relaxed, yet focused on the task at hand. In addition to finding product-market fit, “the companies that are all in here are also focused on building companies,” Riz tells me.

There are a few notable exceptions. When BetaKit profiled Singspiels’ $350,000 seed funding, co-founder Arian Rahbari was quite honest in admitting that starting a company was never one of his initial goals. But having entered into the MaRS ecosystem through the JOLT accelerator (almost all of the companies in District 20 have some past tie to MaRS or JOLT), Singspiel has locked in on the company it wants to be. Recently pivoting away from a broad consumer market for its music learning service, Singspiel is now targeting university and other institutional music programs. It’s a move that Rahbari conceded was facilitated by MaRS’ ties to local universities.

Singspiel isn’t the only District 20 company leveraging MaRS’ local ties. Memotext is focused on constructing digital health algorithms to help citizens change unhealthy behaviours. Memotext’s President, Amos Adler, was quite clear that operating out of “the hub of Canadian health tech” simplified the process of finding customers in both Canada and the U.S.

Sometimes the opportunities come from simply being in MaRS. ExpertFile had been working out of an office nearby at Yonge and College before returning to MaRS once the District 20 space became available. Sitting in the same boardroom, Peter Evans, ExpertFile’s co-founder and CEO, explains to me why he brought the company back.

“The reason why we wanted to come back into MaRS was to meet so many great people,” Evans says. “We have people coming by almost every day that wouldn’t normally drop by as a result of being at MaRS.”

“The thing that’s been special about MaRS for me,” Evans continues, “is that it was always built with a vision to create purposeful collisions between people investing in companies and building companies.”

The feeling of being both a block and a world away from the heart of your business can be compelling to young companies working to establish traction. Grant Munro, FlashStock co-founder and CEO, described his company’s path to District 20 this way: “we came in from a shared space down in Agency Row on Spadina and Wellington. The challenge that we found there is that we felt really disconnected from the startup world in general, or other companies in a similar state.”

Of course, not every startup in District 20 is there to connect. Athletic wearable startup PUSH is another outlier, as the only hardware startup in the co-working space. Another JOLT alumnus, the startup found itself in District 20 because there was simply no longer any room for them in the MaRS Commons.

“They kindly allowed us to stay there at our mass size,” explains PUSH co-founder Mike Lovas. “We were like 12 at the time, and we had this one table with 12 people around it, and we’re a hardware company, so we had boxes and packaging spilling out everywhere.”

While Lovas told me that MaRS does not have the facilities to support early-stage hardware startups (the company would often solder and sand hardware in the Commons, leaving Lovas to leverage his OCAD student access to satisfy more industrious production requirements), District 20 meets the current needs of the startup. With finalized hardware and a warehouse in Mississauga, what PUSH needed was a home for its expanding team.

It needed a place where it could get down to business.

An Ottawa-based sex toy company is learning the hard way that it isn’t welcome to data-mine in the bedroom after reaching a $3.75 million…