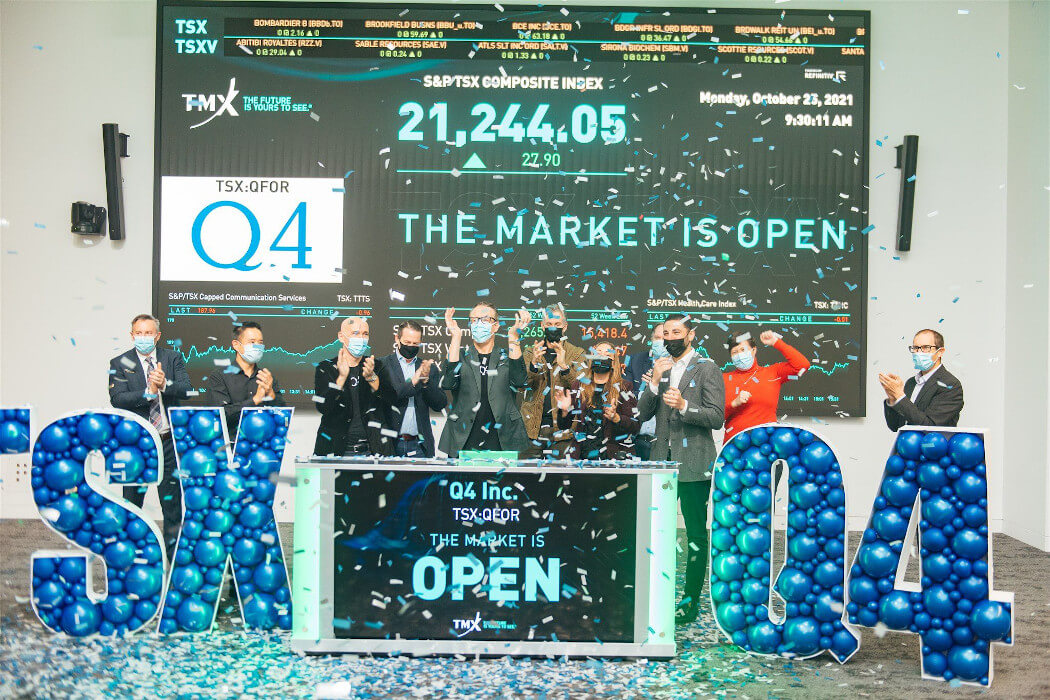 If the third-quarter reports of Q4 Inc. and Mogo Inc. are anything to go by, it wasn’t a bad time to be in the investor relations software business in the instance of Q4, or be a FinTech-slash-crypto startup in the case of Mogo.

Fresh off its $100 million IPO, Q4 reported revenue of $13 million USD (all numbers USD) in its third quarter, 2021 compared to the same period one year ago.

For its part, Mogo posted third-quarter revenues of $15.4 million, up from $9.7 million compared to the same quarter last year.

“We are very pleased with our third-quarter results,” said Darrell Heaps, CEO of Q4. “Making our debut as a publicly-traded company just a few weeks ago, I’m especially proud of where the company stands today.”

The third-quarter report was a bright spot for Q4, which faltered in its IPO, initially pausing the process before ultimately downsizing its offering by $50 million.

Q4 began trading on TSX on October 25 to disappointing early results, opening below its $12 issue price at $11.60 per share, and closing the day at $11.52, four percent below its initial target.

During its second day of trading, however, Q4’s stock price improved, closing at $11.90, only slightly below its $12 goal. After reporting its third quarter earnings, Q4’s stock sat at $11.55.

Q4 said it added 145 new clients in the quarter, bringing their total customer base to 2,600 customers compared to 2,234 customers from the same period in the previous year.

The company also reported launching a number of new products and services including the Q4 Capital Markets Event Platform for Investor conferences; Q4 Virtual Events Platform for Earnings; and, ESG suite of offerings.

“The momentum we experienced in the third quarter across the business is the result of a rapidly growing base of corporate and investment banking customers who continue to increase the number of products they buy from us, as we continue to bring new and innovative products to market,” Heaps said.

He added: “Our revenue growth, combined with our gross margin expansion and a very healthy balance sheet, leave us well-positioned to aggressively pursue our mission to become the largest capital markets communications platform in the world.”

Q4’s capital markets communication platform connects public companies, the buy-side and sell-side across investor relations, corporate access, research and deal management. Q4 also hosts over 13 million investors and sell-side analysts on its platform monthly to learn more about the companies in which they are invested.

While Mogo also posted growth, noting subscriptions and services revenue rose to $9.5 million from $4.2 million in the same quarter in 2020, it also chalked up some losses.

Mogo further reported a net loss of $9.8 million compared to a net income of $1 million in the previous year. The company attributed the loss to scaling back its spending on growth during COVID-19.

Despite that, Mogo’s founder and CEO David Fellow expressed pleasure over the quarter, and said it showcases the strength and diversification of Mogo’s core business and the power of its model.

“We are still in the very early days of fintech adoption as consumers look for solutions that are built for the modern world while also most importantly helping them achieve financial freedom in a way that existing solutions haven’t delivered,” Fellow said.

Fellow noted that the startup is progressing toward its launch of MogoTrade, a commission-free stock trading solution.

“Through internal development, acquisitions, and partnerships, we are assembling all the pieces we need to deliver a best-in-class, mobile-first trading solution. This is a key part of our digital wealth platform and strategy to grow in the multi-trillion-dollar Canadian wealth market,” Fellow added.

During Q3, the company launched a green Bitcoin, promising to plant enough trees to completely offset the CO2 emissions from the mining of every Bitcoin purchased from its platform.

As well, the startup announced a pilot program with Sun Life Insurance to offer Mogo’s savings and investing app to an initial 20,000 Sun Life members.