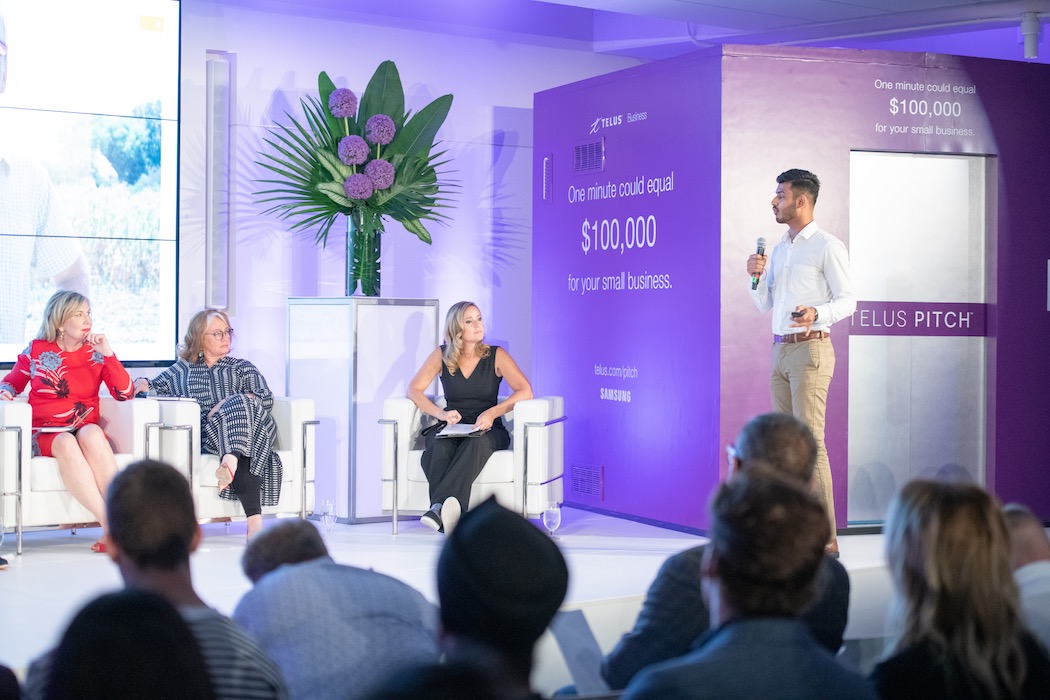 FoodFund, an “imperfect produce” delivery service startup based in London, Ont., has been named the winner of the $100,000 Telus Pitch.

“This will really help us to scale our operations and take us to the next level.”
-Divyansh Ojha, FoodFund

Five finalists pitched their small businesses at Telus House in Toronto this week, with ideas ranging from leveraging loyalty points to pay for education, to beeswax wraps as an eco-friendly alternative to plastic. FoodFund, which sources recovered fruit from Canadian farmers to address food waste in Canada, came out on top.

“The impact that we can make is only as good as the areas that we operate in,” FoodFund founder Divyansh Ojha told BetaKit. “With the $100,000, we’re able to kickstart our expansion and as well as diversify from other food groups that are oftentimes wasted, to can keep more food out of the landfill. This will really help us to scale our operations and take us to the next level.”

Founded in 2016, FoodFund an online subscription-based platform that connects imperfect produce from farms and distributors directly to households within local communities. The company intends to use the prize money to expand its operations, broaden its offering, and build a food literacy curriculum. Ohja said the company’s next market is Kitchener-Waterloo.

This year, the small business competition offered a grand prize of $100,000 cash, and an additional $70,000 in prizes. Telus Pitch received over 6,500 pitches from across Canada, spanning 17 sectors, including retail, IT and telecom, real estate, manufacturing, and trade. The other four finalists this year, all of whom received $10,000 each, included:

InStage is for employees or students who routinely speak in-person to customers or colleagues. The company recreates these interactions in a VR training simulation where users can practice and get performance feedback.

HigherEdPoints has created an access point to a new source of funding for higher education: loyalty points. Students, parents, alumni and donors can convert loyalty points into funds for tuition, meal plans, and more.

“Once again, Telus Pitch has highlighted some of the most innovative, tenacious and passionate entrepreneurs in Canada who, through their commitment to create a better future, will help to make a profound difference,” said Arlene Dickinson, lead judge for TELUS Pitch, and general partner, at District Ventures Capital.“FoodFund has developed an exciting initiative that addresses real concerns that not only impact consumers and farmers, but our environment and economy. I look forward to following their story.”

Telus also gave out a series of awards recognizing the accomplishments of other entrants. The “Community Impact” was awarded to MPL Cuts, a Toronto-based barbershop that has created a safe space for Toronto’s queer community. The “Most Promising Startup” award went to Farmbucks, which provides grain farmers with a place to access the best prices for their products according to location and grade. Telus presented the “Multicultural Business of the Year” award to Nom Nom Foods, which has created a series of international meal options.

“It’s so wonderful to see the Ontario community support our small businesses,” Suzanne Trusdale,
vice president of small business solutions at Telus, told BetaKit. “All five did a spectacular job pitching us their businesses, and they should be very, very proud of themselves and where they’re going to take their business.”

It’s always funny to me when founders of companies “get real” with you during panels. These are smart people, to be sure, sharing how…