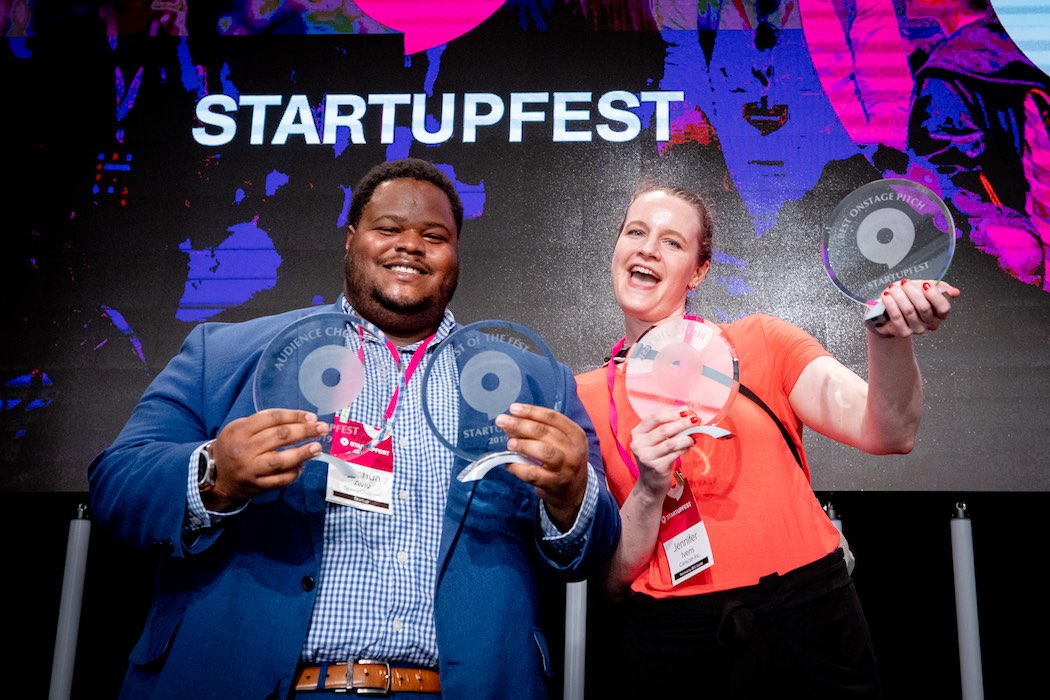 Canscan Technologies and SparkCharge were crowned winners of the pitch competition at Startupfest in Montreal last week. The two companies will each take home $100,000 from the competition’s investor judges.

Startupfest’s investment pitch competition brings together a group of angel investors, who, in 48 hours, name the winners of the investment prize. This year, Startupfest opened an additional $100,000 prize for a women-led startup.

THIS JUST IN! SparkCharge has just been announced as the winner of @startupfest, Canada’s largest startup competition! #startupfest2019 https://t.co/mbO5Z3teeP

SparkCharge, based in Somerville, Massachusetts, was named the winner of the $100,000 pitch competition. The startup has developed a portable and modular electric vehicle charger, aiming to create a mobile, on-demand charging infrastructure that allows electric vehicle owners to have their cars charged at any time. The company also won the audience choice award at Startupfest.

Canscan Technologies, a shipping container software automation company based in Lachine, Quebec, was the winner of the $100,000 slotted for a women-led company. Canscan aims to build solutions for intermodal transportation and shipping logistics. Its software uses artificial intelligence to identify and report issues like structural damage to shipping containers. The company’s system is designed to work without the need for infrastructure upgrades and works with off-the-shelf video recording hardware and pre-existing surveillance systems. The startup also won Best Onstage Pitch.

Artupfest brought together artists, designers, creative innovators, and techies. The ArtupFest Prize aims to reveal and promote talented creatives and help to further develop an existing prototype. With technology inspired by conceptual artists and designers like Yann Kersalé and Hervé Descottes, Montreal-based MtLight wants to reinvent the use of light in modern urban environments. The company was also recently selected through a call for projects for 104factory’s incubation program in Paris, France.

Umaneo, based in Quebec City, aims to transform the process of responding to government tenders through artificial intelligence. A public tender occurs when a government body introduces a tender notice to invite organizations to participate in a public project. Through the tender, interested organizations can outline a proposal and begin participating in a bidding process. The startup automates repetitive tasks in the tender process, by analyzing and prioritizing tenders, then localizing and executing the requirements for a sale.

Clanz, based in Tel Aviv, Israel, has developed an AI-based solution that monitors the audio of daily routines within caregiving environments, in order to detect and prevent abuse of the elderly, children, and persons with disabilities. The startup’s solution claims to be the first fully automated monitoring system capable of detecting both physical and mental abuse, without compromising privacy.

The highly popular Grandmother’s Choice award saw participation from Shopify COO Harley Finkelstein’s mother this year. The judges awarded the top spot to RenewSenses an Israeli-based startup creating assistive technologies for people who are blind or visually impaired. Its technology leverages sound to help users navigate and understand their surroundings independently. The company also won the WeWork Creator Award in 2017, in addition to winning first place in the MassChallenge Israel Accelerator competition.

The winners of Startupfest’s other 2019 prizes included:

Photo by Dominick Gravel for Startupfest

The Canadian government has revealed the seven recipients of $50 million total from the Venture Capital Catalyst Initiative, according to a report from The…