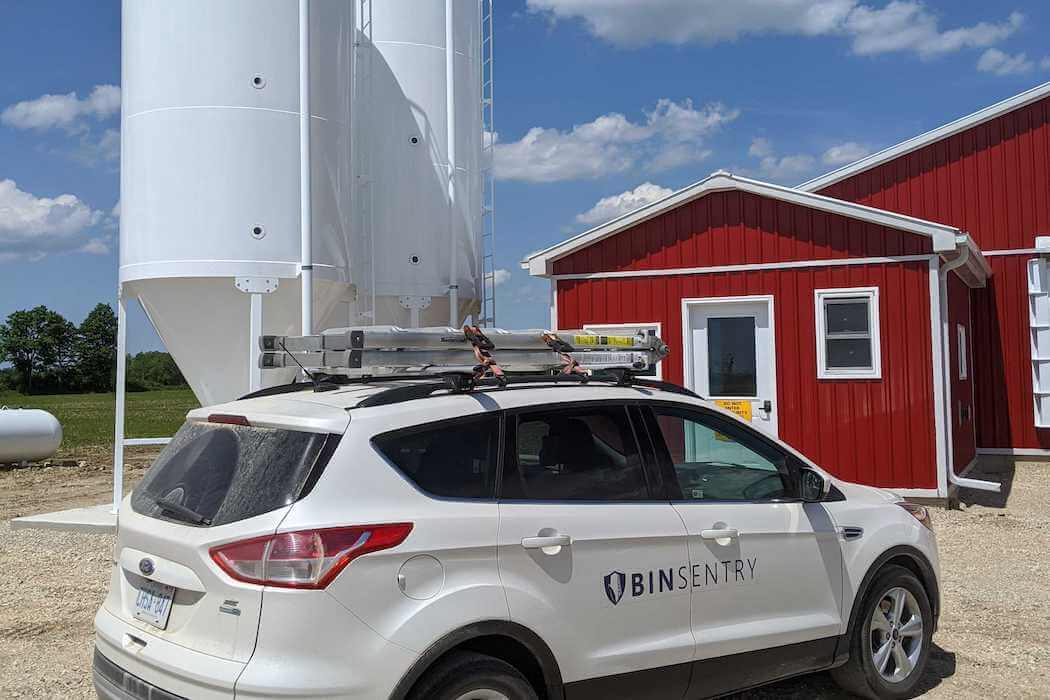 The round also included BDC Capital’s Industrial Innovation Venture Fund, a $250 million commitment launched last year to invest in agriculture, foodtech, resource extraction, and advanced manufacturing. Jonathan Goodkey, principal at the BDC fund, is joining BinSentry’s board of directors as part of the deal.

The Series A capital brings BinSentry’s total venture funding to date to more than $12 million CAD, following a $2.1 million ($1.6 million USD) seed round in 2018. Five investors, including Kitchener-Waterloo’s Garage Capital and Chilligo Investments, participated in the seed round through a series of SAFEs. Each of those investors saw their SAFEs converted and made follow-on investments as part of the Series A, according to BinSentry CEO Randall Schwartzentruber.

BinSentry is co-founded and led by Schwartzentruber and CTO Nathan Hoel. It has developed an IoT sensor that helps farmers, and the feed producers that supply them, track feed bin inventory. The startup claims that its small sensors dramatically increase operational efficiencies for feed producers that deliver their product to farms.

“BinSentry has been founded to essentially replace the standard for feed bin monitoring across the industry,” Schwartzentruber told BetaKit in a recent interview.

“BinSentry sort of flips the industry upside down and begins to provide that information and projections around when feed bins are going to be empty, which really, for the first time ever enables feed mills to begin to operate proactively as opposed to reactively,” the CEO added.

Feed bins are structures found on farms that store a variety of livestock feeds. That feed is supplied and transported by producers like CP Group and Cargill. In the not-so-distant past, farmers would monitor bin inventory by banging a rubber mallet on the side. They would then place orders with producers for refills.

“We find ourselves in a very interesting position in that increasing efficiencies in agriculture becomes all the more important when you are facing the type of crisis that COVID-19 has sort of thrust upon industry worldwide,” Schwartzentruber said.

“Even when things like this happen, people still need to continue to eat,” the CEO said, noting the potential for increased demand for BinSentry’s tech due to the pandemic. “The sustainability of our food supply system becomes all the more important when things like this are going on. One of the things that BinSentry helps our customers to do is operate more efficiently, which enables them to service [more] bins with a smaller staff.”

A recent industry report estimates that the global smart agriculture market, which includes sensors and software, is set to grow from $13.8 billion USD in 2020 to $22 billion USD by 2025. Of that, hardware offerings are expected to hold the largest market share.

The Kitchener-Waterloo startup sells its offering directly to feed producers.

“The real organizations who stand to benefit from having access to this information are, in fact, the feed companies,” said Schwartzentruber. “We enable those companies who are using our technology to save hundreds of thousands or millions of dollars each year as they optimize their transportation and production schedules.”

“We’re quite literally building a sensor the likes of which have never been seen in this type of industry in the past.”

BinSentry was founded in 2017 after Schwartzentruber learned from a local farmer that they felt there was no easy to use solution for feed bin tracking. After developing its product over a two-year period, BinSentry launched its first sensors to market in 2019.

Within that first year, BinSentry claims it installed more than 1,000 sensors. Currently, it works with more than 20 feed production companies, servicing over 10,000 bins.

BinSentry’s sensors are small, five by two and a half inch pieces of hardware that are solar-powered and installed on top of feed bins. A LiDAR sensor affixes to the opening in the bin and profiles the feed inventory inside.

Rather than selling the sensors as hardware products, BinSentry uses a software-as-service-style approach. Its feed producer customers pay for a monthly monitoring service without having to own the hardware. The Kitchener-based startup, which currently operates mainly in the United States and Canada, works with local installation partners to do the hands-on work.

Schwartzentruber estimates the North American feed bin management market to be an approximate $1.2 billion opportunity, which he feels BinSentry is poised to dominate.

In its home province of Ontario, BinSentry claims 85 percent of the feed market as its customers. Schwartzentruber noted that BinSentry has seen success in the Midwest United States as well.

Now, BinSentry has its sights set on going global. Schwartzentruber hinted at imminent plans to take the startup’s technology to feed bins around the world. He pointed to Asia, Latin America and North America as key markets that BinSentry is looking to focus on.

The 15 person company, which is currently based solely out of Kitchener is also set for an expansion following the Series A raise. BinSentry is hoping to establish a US office in order to be closer to a large number of its customers. The startup is planning to grow its team to by at least 30 to 35 employees over the course of the next 12 months.

BinSentry is also working to develop a “second generation” sensor, which Schwartzentruber said is set to hit the market within the next couple of months.

“We are developing a second-generation sensor [with greater accuracy] as we speak,” he said. “We’re quite literally building a sensor the likes of which have never been seen in this type of industry in the past.”