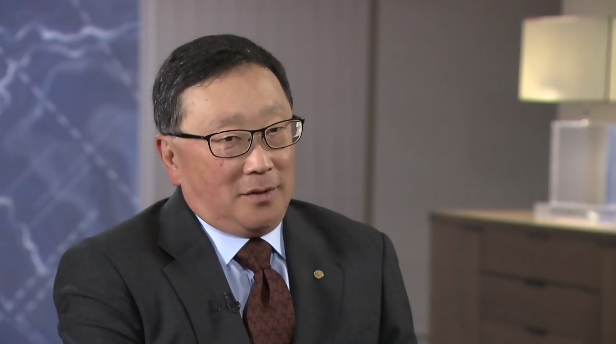 Earlier this week, BlackBerry announced that it would outsource the future development of its hardware to its partners, instead focusing on growing the software side of its business. For BlackBerry’ CEO John Chen, this means shifting gears and thinking about how the company will revive itself after being disrupted.

Chen, who became the CEO of Blackberry in 2013, spoke about how consumers, despite having seen the impact of BlackBerry’s hardware, often underestimate what the company has done and what it is capable of doing. Concentrating on the improvement of its software business, he said, will help the company and its consumers get in the mindset of seeing BlackBerry’s growth once again.

“What we’re doing and what we can do will be much beyond just that device.”

“What we’re doing and what we can do will be much beyond just that device. We’ll go much beyond that,” said Chen. “There’s a slogan in our company that BlackBerry is software and we’re trying to get that mindset so we’re more of a software company than a hardware company.”

Having seen both the successes and failures of BlackBerry, Chen offered advice to other companies who fear being disrupted and losing their position in the tech industry. “The hardest thing to do is recognize that your current model needs changing,” said Chen, who says this is something BlackBerry struggled with for some time as it focused mainly on its successes and not enough on what could go wrong. “I think disruptors of today’s businesses need to look at it from that point of view that things are going well, what could go wrong. There’s not enough board rooms or senior management team conversations about what could go wrong.”

The Disruptors’ co-host Bruce Croxon said that Chen’s interview drove home the point that “no matter how things seem to be going, today more than ever before, you have to be on your toes.”