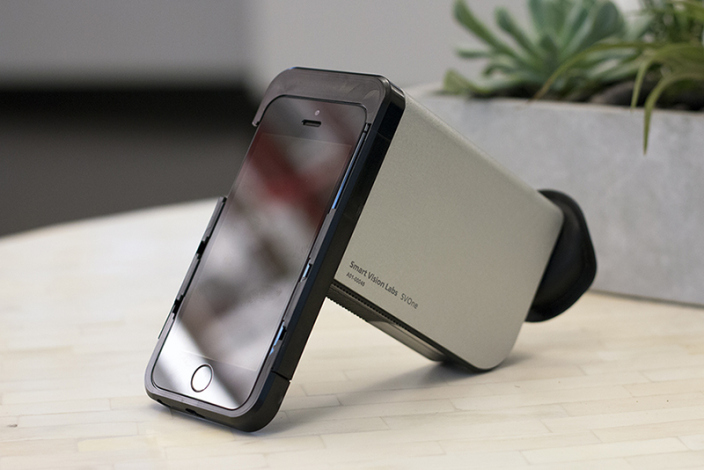 With a constant flood of new apps and games, it’s sometimes easy to forget that the smartphones we carry around in our pockets are extremely capable computers, and that computers can do far more than entertain for a couple of hours or make a call to a loved one.

Case in point: a startup in New York called Smart Vision Labs is using smartphones to help reduce the cost of eye examination equipment from about $20,000 to $40,000 to a mere $4,000. The company has developed an iPhone attachment (seen above) and app that can be used to give a proper prescription to someone without a trained optometrist. There’s no need for bulky equipment and, best of all, it’s mobile.

On Monday, the company announced that it raised $6.1 million from TechStar Ventures, and said that it will use that money to expand its team and scale production.

As more than 1 billion people around the world experience vision problems and don’t have access to an optometrist, Smart Vision Labs is using the power of our pocket computers to effect real change in the world.

However, they’re not the only one, with a few Canadian companies attempting to do the same thing. In the same space as Smart Vision Labs there’s EyeCheck, a Waterloo-based startup that was recently featured on the BNN show The Disruptors. The company is younger than Smart Vision Labs and not as far along, but trying to make a similar impact.

In Toronto, there’s also ChipCare, a startup that recently raised an oversubscribed $5 million Series A round. While ChipCare’s solution doesn’t involve a smartphone, the company has basically developed a tri-coder that can measure the concentration of t-cells in an HIV patient.

What’s interesting about all these technologies is that they are as useful in Canada as they are in the developing world. According to the CIA Factbook, Canada has about 2.07 doctors for every 1000 people. This is actually one of the lower ratios in the developed world—for instance, in France, which has a larger population, that ratio is closer to 3.19. This problem is exasperated by the fact that so much of Canada’s population lives in areas that are remote and hard to access. In such remote areas, newer, more mobile technology can make the difference.

Today San Francisco-based Sharethrough, a native video advertising company, announced it has raised $5 million in a Series B round from its previous investors…