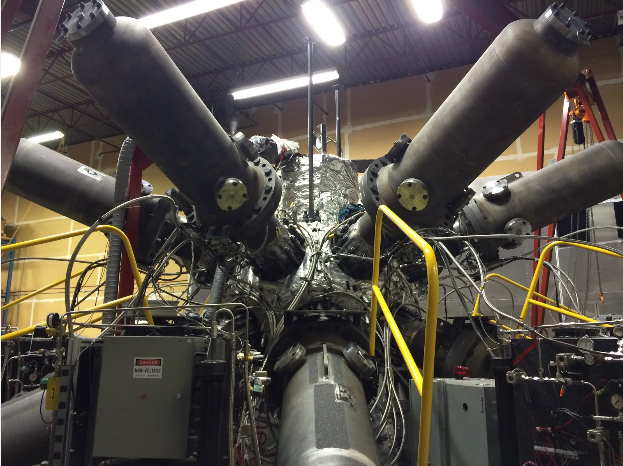 But tucked away in a nondescript Burnaby, BC business park is a project of massive global implications. General Fusion is in the race to transform the world’s energy supply.

(Though you really can’t call this a moonshot because they’re building a fusion reactor that’s essentially harnessing the Sun’s fuel.)

Imagine a world with abundant and clean energy with no pollution or greenhouse gas emissions. The team of 65 people at General Fusion can.

Recently the Telus Science World Equity Giving Committee invited some of BC’s tech community leaders to share an evening with Dr Michel Laberge, founder and chief scientist for General Fusion as well as a TED2014 presenter. This event also represented an evening of educational alignment between today’s leaders who care about helping foster the development of tomorrow’s technologists and scientists.

It’s important noting that Science World is a non-profit organization playing an important role in the growth of the technology sector, by engaging youth at an early age. They’re inspiring a love of science, and showing them that sciences, engineering and technology offer an exciting and rewarding future. Science World is about helping generate the talent that will invent, innovate and lead companies in the future.

The Equity Program is working with British Columbian technology and health science companies and their principals – professionals who know the pivotal role that science and technology play in developing the province – the program allows for individuals and their companies to either donate securities or to grant stock options to Science World.

It’s been a journey about finding a solution to global melting because of our fossil fuel dependence that made Dr. Laberge a great fit for the evening. As well, having PhD from UBC in plasma physics, and using the mid-life crisis moment of turning 40 as a good reason to leave his position as a senior physicist and principal engineer at Creo Inc, adds to his story too.

In terms of startup stories and basement science experiments (actually an old garage on Bowen Island, BC), it doesn’t get much better than this. Laberge shared how he started it all with a seed round from family, friends and the federal government, to build the first prototype.

It was about the size of your kitchen stove. The key thing was that he managed to make something happen with the plasma reactions, as “the sensors detected excess neutrons, suggesting at least a few hydrogen atoms had fused.”

He only somewhat jokingly called them “my marketing neutrons.”

This is a David versus Goliath story too, as Laberge pointed out a variety of other Fusion projects are being worked on around the globe. Those projects also have considerably more money behind them, but a boatload of cash doesn’t always buy a winner, as Maple Leaf fans only know too well. (Editor’s Note: Canucks not too far behind- J.C.)

The challenge with fusion power, and the reason we don’t yet have it, is rooted in creating a system where less energy goes in than the amount of energy it generates. The science aside, there’s also the business considerations of building such a reactor to scale, and getting the energy onto the grid to actually power our neighborhoods. It’s about transcending scientific theory into reality, and delivering a clean energy solution that’s only pennies per kilowatt-hour.

I’ve toured General Fusion and seen the prototype reactor. Needless to say, very complex engineering is needed to solve a very complicated science experiment. Rather that trying to describe how the technology works, it best to watch Dr. Laberge’s TED talk, or read Michael McCullough’s feature in Canadian Business.

To date they’ve raised in the neighborhood of $50 million. It’s worth noting Amazon founder Jeff Bezos venture capital group, Bezos Expeditions, is an investor. I was told that Bezos has a keen personal interest in the company.

There was nothing “pie-in-the-sky” about Laberge’s vision of the future. Progress is being made, but the day our cities will be powered by the sun’s fuel is still at least 10 years and billions of dollars away.

*Disclaimer – I serve as a member of the Telus Science World Equity Giving Committee.

Lending Loop back in business following thumbs up from the OSC

Toronto-based Lending Loop announced today that is once again accepting new businesses, investors, and loan requests on its platform. It has been eight months…