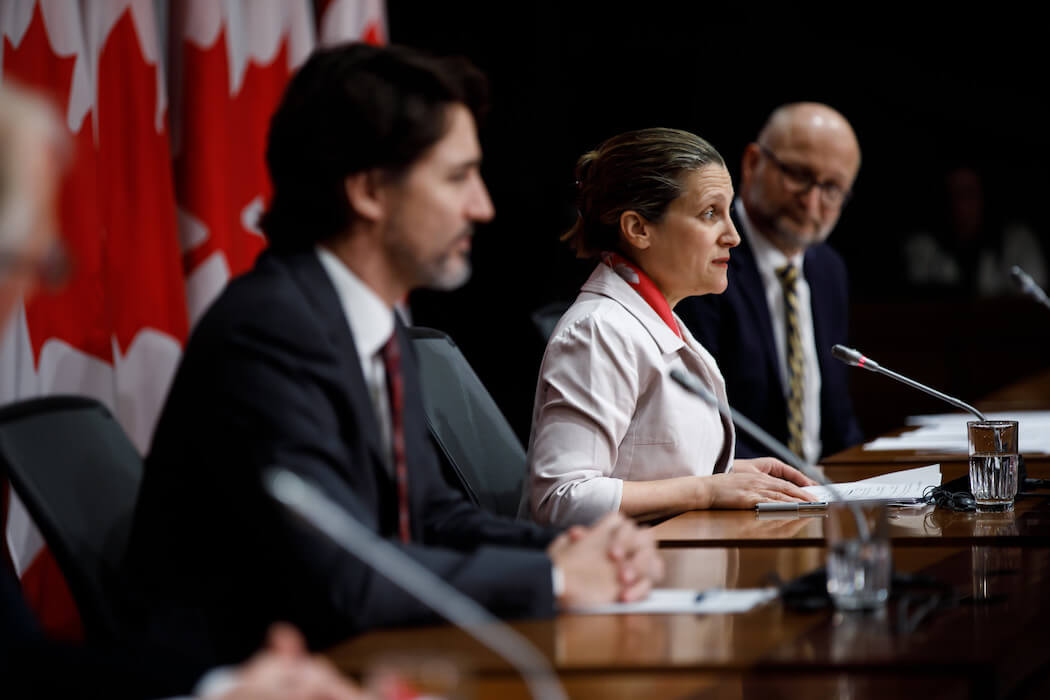 According to the federal government’s Fall Economic Statement, the national deficit is expected to reach $381 billion for the current fiscal year with a proposed $100 billion in stimulus spending over the next three years.

Finance Minister Chrystia Freeland tabled the fiscal update in the House of Commons Monday. The update, which was first committed to in the September throne speech, included a summary of the cost of pandemic-related aid, as well as the government’s plan to revive the economy amid the second wave of COVID-19 cases.

This is the second time the federal government has provided economic numbers this year, after the Liberals cancelled plans to release a federal budget in March. In July, now-former finance minister Bill Morneau tabled an economic and fiscal “snapshot,” which at the time projected a $343.2 billion deficit for the current fiscal year.

The deficit projected by the Liberal government in July did not account for a number of new costs associated with promises the government made in the weeks and months following. Since the July projection, the estimated federal deficit has grown by approximately 10 percent.

In its fall economic statement, the government proposed to extend the current subsidy rates of the Canada Emergency Rent Subsidy (CERS) for an additional three periods. This cap already applied to CERS application periods ending December 19, however the extension would provide a base subsidy rate of up to 65 percent for eligible expenses until March 13, 2021.

“This would ensure that businesses and other organizations continue to have the support they need through the second wave of the pandemic and the winter,” the federal government said.

The government is also proposing to extend the additional 25 percent rent subsidy rate for businesses affected by lockdown measures for an additional three periods, until March 13, 2021.

Since July, the federal government has made several changes to existing economic support programs and expanded others. Earlier this month, the new CERS, meant to announce a previous commercial rent subsidy program, was signed into law.

The CERS replaced the previous rent program, the Canada Emergency Commercial Rent Assistance (CECRA), which has been described by many, including the president of the lobbying group Save Small Business, as a failure.

As part of the November legislation to introduce the CERS, the Canada Emergency Wage Subsidy (CEWS) was also extended to June 2021. The government claimed it has made $50 billion in payments since launching.

In its economic statement, the federal government is proposing to increase the maximum subsidy rate back to 75 percent for the period beginning December 20, 2020, and to extend this rate until March 13, 2021.

This, the government said, would provide greater certainty to employers during the pandemic. The increase to the CEWS is expected to cost the government $14.8 billion.

Dan Kelly, president of the Canadian Federation for Independent Business, said while he welcomed the return to a maximum wage subsidy of 75 percent, he noted a firm must have a 70 percent loss in revenue to qualify for this amount compared to a 30 percent loss during the spring lockdowns.

The federal government has proposed a $500 million top-up to the Regional Relief and Recovery Fund (RRRF). This injection would bring the currently $1.5 billion fund to $2 billion.

The RRRF, initially launched in May, is intended to support regional and rural businesses that may not have existing relationships with financial institutions, or don’t qualify for other federal relief programs.

The government has proposed that all foreign-based vendors selling digital products or services to consumers in Canada be required to register for and remit the GST and the HST on their taxable sales to Canadian consumers.

Under the current rules, foreign businesses with no physical presence in Canada can sell digital products and services without charging the GST or HST.

This new measure would apply to digital marketplace platforms such as app stores and streaming platforms. These changes are proposed to be effective July 1, 2021, and are estimated to bring in $1.2 billion per year. The government plans to hold consultations with stakeholders on these proposed changes.

The government also proposed to implement a tax on corporations providing digital services that would take effect from January 1, 2022. The government said this would increase the government’s revenues by $3.4 billion over five years, starting in 2021-22. Further details on the tax are set to be revealed in Budget 2021.

Another proposed new tax will be applied to short-term rental accommodations booked in Canada on sites like Airbnb, which do not currently collect sales taxes from their customers. Under the new proposal, the GST and the HST would be collected on all stays and remitted by either the property owner or the companies that coordinate these bookings. The government estimated this tax will increase federal revenues by $360 million over the next five years.

The government is also eyeing foreign online vendors and digital platforms that store goods in Canada and deliver them to Canadians. The statement proposed to levy the GST and HST on all sales to Canadians of goods that are located in Canadian fulfillment warehouses, whereby the tax will be required to be collected and remitted by either the foreign-based vendor or the digital platform that facilitates the sale.

The federal government also proposed $250 million to the Strategic Innovation Fund over five years. This additional funding is aimed to help intellectual property-rich firms have the support they need to face the challenges presented by COVID-19.

“You can’t tax your way to prosperity, so it’s good to see the government has listened to the leaders of Canada’s high-growth tech sector and understands that stock options are used for talent attraction and retention, and should be kept as competitive as possible,” said Benjamin Bergen, executive director of the Council of Canadian Innovators.

The federal government also committed to new spending for infrastructure projects tied to the government’s promise to reduce greenhouse gas emissions as part of the economic recovery.

In its September throne speech, the government first revealed plans to launch a fund to attract investments in zero-emissions products. The statement also proposed to cut the corporate tax rate in half for said companies in order to ensure Canada is “the most competitive jurisdiction in the world for clean technology companies.”

In its economic statement, the federal government proposed providing $150 million over three years to Natural Resources Canada, starting in 2021-22. These investments would be specifically targeted toward infrastructure for zero-emission vehicles.

The government has also expanded access to the Canada Emergency Business Account (CEBA), making the $40,000 loans available to businesses that did not have a business bank account before March 1, although that has yet to be passed. The government estimated the CEBA program will cost $27.8 billion.

In its fall economic statement, the government said the CEBA program will “soon be expanded,” pointing to the previously announced additional interest-free $20,000 loan. Half of this additional amount, up to $10,000, would be forgivable if the loan is repaid by December 31, 2022.

UPDATE 12/01/2020: This story has been updated with additional information on proposed taxes for digital businesses.