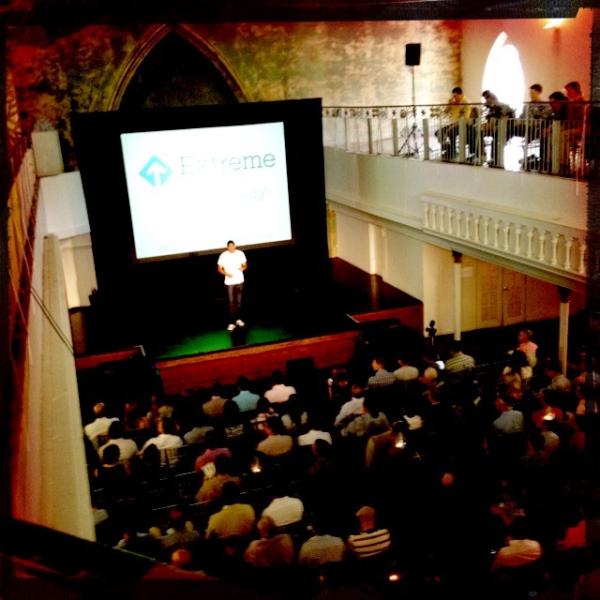 The Dx3 2014 conference is just two months away and along with a new roster of impressive speakers, the Toronto-based digital media conference has also just added a partnership with Extreme Startups, a Toronto-based startup accelerator.

This year’s conference from March 5-6 will feature the “Extreme Startups Acceleration Zone @Dx3”, where six new startups selected to be a part of Extreme Startups’ new “Advanced Track” cohort will be showcased. The two organizations are calling it “a ground-breaking new partnership aimed at putting Canada’s future leading digital product companies in front of brands eager to be at the forefront of global digital marketing and commerce innovation.”

Extreme Startups managing director Marcus Daniels said his accelerator’s new “Advanced Track” cohort of companies will actually launch at Dx3 2014 with an opportunity to not only launch to the general public, “but also transact with over 4,000 potential customers.”

Read Also: How do the $150K BDC Convertible Notes Work?

The other perk is the chance to be showcased at Dx3  in the “Extreme Startups Acceleration Zone”,  with the opportunity to pitch to an audience of Canada’s “leading investors, agencies, brands and retailers all looking to enhance their digital offerings.” Extreme’s cohort kicks off in around the time of Dx3 2014 and continues to June 2014. Applications have a rolling admission until February 15, 2013.

“Dx3 is as committed as ever in helping Canadian startups increase their visibility on a global scale, but more importantly we hope that through our partnership with Extreme Startups, Dx3 contributes to the actual business growth of the participating companies,” said Dx3 marketing director Anthony Lipkin. “To be part of a partnership where entrepreneurs will have access to best in class mentorship, ambitious funding and access to a collaborative and connected Dx3 community, is a privilege.”

Netflix has increased the price of its popular video and television streaming service up to $9 for new customers in Canada and elsewhere. According to…