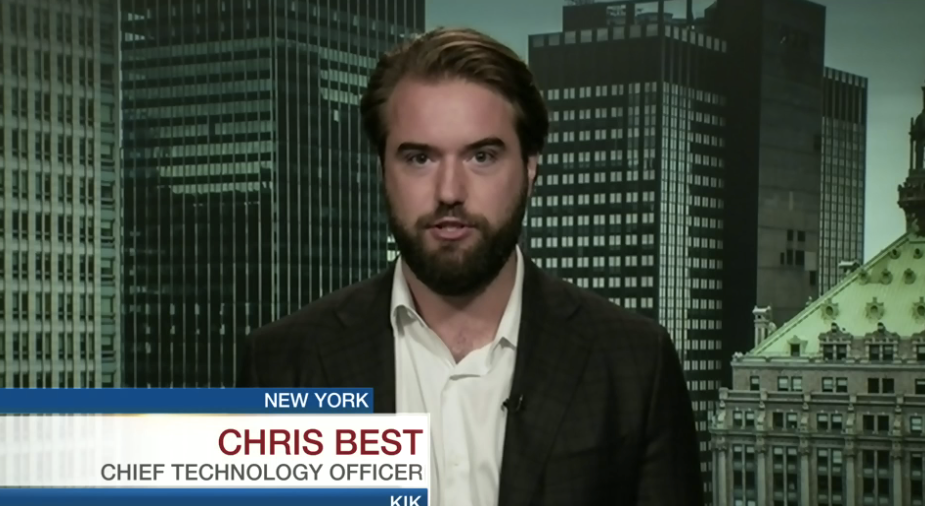 Less than 24 hours after Kik CEO Ted Livingston took to Medium to announce that the company had raised a $50 million investment from Tencent, maker of WeChat, China’s most popular messaging app, co-founder and CTO, Chris Best, was on TV explaining how the company could become the WeChat of the West.

In an interview with Amber Kanwar, co-host of BNN’s The Disruptors, Best began by covering much of the same ground as Livingston, explaining Kik’s vision of using a chat app to do anything and everything.

When pressed by Kanwar to explain exactly what Kik’s newfound $1 billion valuation (making it either a unicorn or a narwhal, depending on preference), Best had this to say.

“It’s a cool number and it’s great – I actually don’t think the valuation matters that much to us,” he said. “The thing that we’re really excited about with this investment is who the money is coming from and what it says that WeChat are betting on Kik to win in the west.”

This is not the first time Kanwar has interviewed Best. On The Disruptors, Best fielded questions of IPO and acquisition from Kanwar based on Kik’s decision to hire San Francisco-based Qatalyst Partners to evaluate the company’s future options. Best explained today how that decision had an impact on yesterday’s announcement.

“One of the things we believe in at Kik is exploring all of our options,” he said. “We hired Qatalyst to help us look at all of the options of things that we could do in M&A, and strategic partnerships, and this WeChat deal is actually the result of that process.”

Wealthsimple has sold its United States (US) book of business to online financial services company Betterment. The Toronto-based FinTech startup cited the impetus behind…