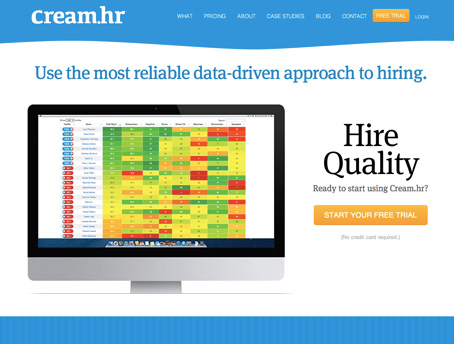 There’s a large number of jobless tech workers in the Waterloo area after the recent BlackBerry layoffs, and local startup Cream.HR recently took note of this in a clever PR move that’s also making them look really nice.

The Waterloo-based startup has informed us that they’re “lending a helping hand” to the displaced BlackBerry workforce, by offering former BlackBerry employees its online talent assessment solution for free.

Cream.HR’s CEO Caitlin MacGregor said that Waterloo is a closely knit technology community, and that it was important to extend the olive branch to the startup’s BlackBerry colleagues, before commenting on her company’s product.

“Our platform uses the science of psychology to uncover each applicant’s problem solving abilities and priorities so they can position themselves with prospective employers,” added the CEO. “And we can help employers surface the highest potential candidates for a company’s culture and position and go beyond gut instinct to know how a candidate will perform on the job.”

Two weeks ago several media outlets reported that BlackBerry was laying off 300 at its Waterloo-based location in a larger plan to reduce its global workforce by 4,500.

The company had incurred significant losses in its latest posted numbers and quickly announced it would be reviewing potential take-over bids. Last month FairFax Financial Holdings offered $4.7 billion to acquire all of BlackBerry, and is reportedly still finalizing where it will get all the money.

Enter the Waterloo-based startup. Founded in late 2011, the Communitech HYPERDRIVE graduate Cream.HR offers a simple web link to existing job postings and candidates are entered into the company’s real-time dashboard. Cream.HR “customer success managers” then go through potential candidates with employers. They use a proprietary Task Management score to predict of job success, and ultimately funnel out weaker candidates. “Cream.hr’s scientifically automated system assesses problem solving ability and other traits that determine high output, fit and overall success, before an employer ever reads a resume.”

“It highlighted my passion for technology and for building business relationships, and strongly pointed me toward a technical sales role, which had never crossed my mind as an engineer,” said Valdez. “Cream.HR helped me articulate a strong set of credentials and insights allowing me to approach my job search with laser focus and differentiate myself within a large pool of applicants.”

Former BlackBerry workers who wish to take advantage of Cream.HR’s free assessment offer can sign up today at http://cream.hr/bb.

On October 29th 2013, from 10:00 AM to 12:00 PM at the Accelerator Centre, Meeting Room 2, Cream.HR will host a Job Seeker Assessment Workshop sponsored by Communitech. The event will assist former BlackBerry employees uncover their innate strengths and talents and best position themselves with future employe

The Fundica Roadshow has announced the three winners of its grand finale, where 10 startups pitched to take home a $500,000 equity investment award…