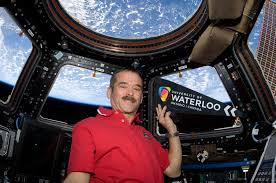 There was enough excitement two months ago when it was announced that the first Canadian to go to space, Chris Hadfield, would be teaching aviation at the University of Waterloo. Today it all commenced as Hadfield addressed students in Waterloo for his first lecture.

“Keep your long-term goals in mind to make your dream a reality,” was the resounding message from the former commander of the International Space Station.

Professor Hadfield, who has been around the world 2,500 times, took the audience on an astronaut’s trip around the Earth, from launch to re-entry. The lecture was his first appearance on campus since his appointment as adjunct professor of aviation last October.

“You don’t get lost in the hassles of the short term. It helps you keep your decision-making headed in the right direction,” said Professor Hadfield, who dreamed of going to space before Canada had an astronaut program. “Nothing in the future is guaranteed. But what is a guarantee is if you don’t turn yourself into the person you want to be, you zero your own chances.”

On October 8 the University of Waterloo announced that Hadfield would become a professor at the school. Hadfield’s first role on campus will actually be research-based, rather than teaching. The Vancouver native will finish his participation in research on heart health in space with professor Richard Hughson. Hughson is looking into why some astronauts are prone to fainting spells when they return to earth by predicting how they recover from rapid changes in blood pressure. In addition to his involvement with heart health research, Hadfield will assume some teaching and advising responsibilities in aviation and related programs from Fall 2014. Waterloo’s offers two undergraduate degrees in aviation, a Bachelor of Science and a Bachelor of Environmental Studies.

“It’s astonishing to think that I once introduced Chris Hadfield to a Waterloo audience as he orbited the Earth on the International Space Station,” said Feridun Hamdullaphur, president and vice-chancellor of Waterloo. “I welcome him here today as a member of our faculty. This is an exciting day as he gives his first lecture as professor.”

During his five months in space, Professor Hadfield participated in two ongoing research projects related to cardiovascular health with Professor Richard Hughson, of the Department of Kinesiology. One study is investigating why some astronauts are prone to fainting spells when they return to Earth. The other is looking at why arteries undergo aging-like changes during spaceflight, and whether the results have direct application to the major health problems associated with stiffer arteries as we age.

Waterloo’s aviation program launched in 2007. It is the first to offer a bachelor of science degree in Aviation with a specialization in physics or earth sciences or non-specialized science with geomatics. It also offers the first bachelor of environmental studies in geography with a geomatics specialization that also allows students to graduate with a commercial pilot license.

Hadfield called the university “world class”. His relationship with the University of Waterloo dates back to 1982 when he undertook post-graduate research at the school. He also made a space-to-campus downlink call to Waterloo students on Feb. 15  while he was 370 kilometres over the Earth at the time.