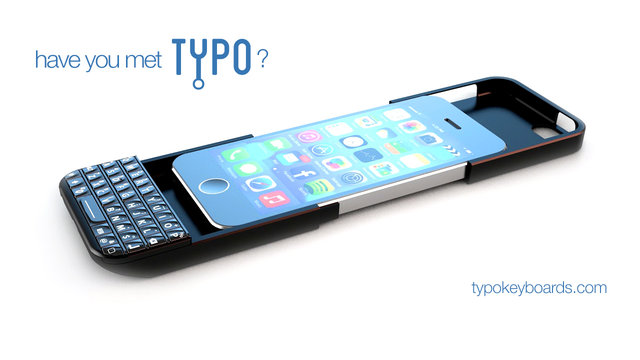 In a rather bizarre piece of Friday afternoon tech news, embattled Canadian smartphone manufacturer BlackBerry is suing a startup owned and run by American Idol host Ryan Seacrest. The startup is Los Angeles-based Typo Products, which makes a snap-on smartphone case equipped with a keyboard extremely similar to the one found on BlackBerry’s flagship phone.

In documents filed in a California court, BlackBerry accused Typo Products of copying its keyboard design, ripping off the Waterloo company’s  “commercial recognition and goodwill.” Typo Products plans to show the case at the Consumer Electronics Show next week in Las Vegas.

(For the record, the winner for funniest opening line among all the media outlets who have reported this story has to go to VentureBeat’s Ricardo Bilton for this gem: “BlackBerry, the company that’s lost so much it has nothing to lose, is going on the offensive.”)

Cofounded by Seacrest and Laurence Hallier, Typo Products wrote on its site that “for several years, many of our friends and colleagues carried two phones: one for typing and correspondence and an iPhone for virtually everything else. One night, we were out to dinner and both had our phones on the table. Two people, four phones! We looked at each other and thought there was an easy solution to the problem, a keyboard for the iPhone…we realized that there was no solution that worked well.”

BlackBerry isn’t buying it. “Typo’s keyboard product has caused and is likely to continue to cause confusion, mistake and deception as to the source of origin of (its) products,” BlackBerry said in the filing. “(It) is likely to falsely suggest a sponsorship, connection, or association between Typo, its products, and its commercial activities with BlackBerry.”

Typo Products hasn’t responded yet, and its not BlackBerry’s first rodeo when it comes to patent infringement accusations. The company complained about PDA-maker Handspring in early 2002, saying the physical keyboard resembled the functionality found in its BlackBerry phones. Handspring  licensed those patents, and the complaint was later dropped.

“This is a blatant infringement against BlackBerry’s iconic keyboard, and we will vigorously protect our intellectual property against any company that attempts to copy our unique design,” BlackBerry’s chief legal officer Steve Zipperstein said in a statement. “We are flattered by the desire to graft our keyboard onto other smartphones, but we will not tolerate such activity without fair compensation for using our intellectual property and our technological innovations.”