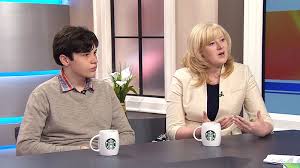 The mother of  a Waterloo “autistic genius” teenager will speak to a Toronto audience on December 2 on the heels of her recently published memoir, “The Spark: A Mother’s Story of Nurturing Genius”.

Two months ago, 15-year-old Jacob Barnett was accepted at the Perimeter Institute for Theoretical Physics in Waterloo, one of the most eminent scientific institutions in the world. At his young age, Jacob’s IQ is higher than Einstein’s was. His family, including Kristine Barnett, his mother, all currently live in Waterloo.

While I have’t read the book (although now I really want to), I can’t help but shake this question in my mind, of just how much a parent should take advantage of the extraordinary abilities of a child through publicity. Granted, it happens all the time, particularly with parents of budding or young professional athletes.

But the more articles I read about the pair, the more I learned of all the inspirational talks Jacob’s mother gives, about the bestselling book released in April and the potential hollywood film that could follow it. I cared less and less about hearing what Kristine Barnett had to say and more about what Jacob is saying, the actual young man who possesses the brilliance. And I kept wondering, just how much money will be made off of this young man’s brilliance?

At what point does a young teenager get to decide for himself how his own abilities should be promoted and sold?

While Jacob acts and talks like a 20-something, the fact remains that he’s a 15-year-old kid, and certainly when I was 15 year old my mother still made the majority of decisions around my life. Like any child, Jacob’s legal guardian still has the right to make the best decisions about his future.

Central to Kristine Barnett’s promotion of Jacob’s intelligence focuses around her journey as a mother to reject what modern special ed teachers and autistic therapists suggested to her, including one who told her while Jacob was still very young that he would never read. The memoir focuses around how she first educated Jacob through homeschool, administering a different kind of education that encouraged the young child to flourish and learn what he wanted.

“Jake got alphabet cards galore, as well as maps (another passion) and puzzles,” reads a review by the Washington Post. “Barnett managed not only to mainstream Jake into kindergarten, she also did the same for many other autistic kids in the learning center, Little Light, that she ran out of her garage.”

The book’s reviews imply that much of Jacob’s success is due to her rejection of modern education theory (and if it doesn’t imply that, its quite close to it). This assertion prods at the eternal nature/nurture debate. Would Jacob’s brilliance flourish regardless of the actions his mother took in his educational development, or is she to be credited? Let me remind you, the book is literally titled: “A Mother’s Story of Nurturing Genius.” It seems clear who’s taking credit.

Despite what can be seen as claims to Jacob’s eventual brilliance and profiting off of those claims, the entire family’s story is touching and motivational.

When Jacob Barnett was 2 years old, he was diagnosed with moderate to severe autism. Doctors told his parents that the boy would likely never talk or read and would probably be forever unable to independently manage basic daily activities. What followed was a difficult journey for the family: Kristine’s second child was born with a disease called reflex sympathetic dystrophy, a neurological disorder that can affect every system in the body. When she was 30 she suffered a stroke and after that she was diagnosed with lupus.

“With the onset of the Great Recession, Michael Barnett loses his job at Circuit City, the family is overextended financially, and the Barnetts spend part of the frigid Indiana winter in a house without heat,” noted the Post.

But the tough mother Kristine Barnett and her family persevered, and today all seems well. Jacob has been tipped to win the Nobel prize, a 2011 TIME report has asserted that he may one day disprove Einstein’s Theory of Relativity, at 12 he became a paid researcher in quantum physics and along with his current spot in Waterloo’s genius school, Perimeter Institute for Theoretical Physics, he’s also given a TEDxTeen talk.

As well, the media appearances seem to pile on for Kristine Barnett. At the end of a recent article on the pair in the Globe and Mail, Kristine says to Jacob, “What do you think about when I go, ‘Oh, I’m worried about you taking [on too much]?”, to which Jacob responds, ““I’m worried about you having more media appearances.” It was almost too good to be true as I read it.

But no matter how much his mother profits, no matter how many media appearances or book sales, Jacob will likely very easily earn tons of money in his life. He’s touted to become one of the most brilliant people on earth.

Still, this was just one guy’s thoughts. And you can bet I’ll be reading “The Spark” tonight.

Here’s a long-form piece about Jacob in Maclean’s magazine by Paul Wells.

Here’s a video of Jacob in March, explaining a “simple quantum mechanics problem”.

Photo by Canada AM.