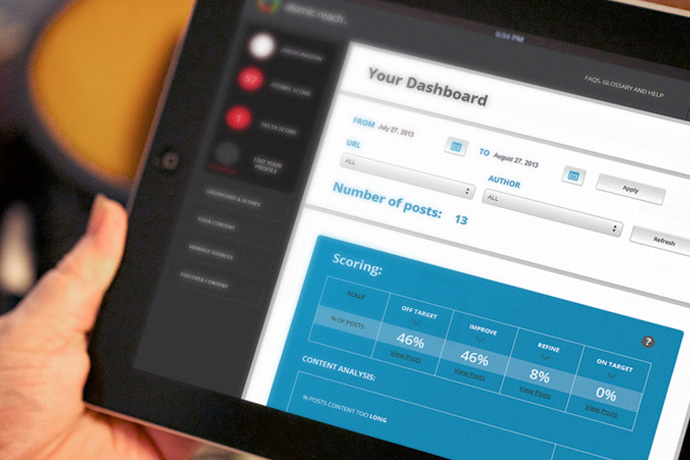 Bradley Silver is a master of providing valuable information. Now on his third startup, Silver has already helped brands scour the Internet for fraudulent information with his first startup Brandimensions in 2001, still in operation today as BrandProtect, and his second venture, BrandIntel, was one of the first three social media monitoring companies in North America in 2003, predating Facebook and Twitter.

Now, Silver is in the process of unveiling his latest creation, the beta version of his current startup Atomic Reach, which provides insights into the relevance, engagement potential, and audience match of content produced for the Internet, before its published online.

Silver founded Atomic Reach in 2011 as a content marketing platform that provides insights to brands by organizing information published on the Internet into groups based on features such as writing style, quality, and relevance.

“We thought it would be an interesting idea if we were able to curate content on a consumer’s peer group, and allow brands and publishers to share those articles and thoughts and opinions with the content they were producing,” he said.

Silver ran into trouble, however, when he began searching for a way to automate the curating process, which required organizing content based on very specific attributes.

“We couldn’t find anything that really met the needs of what we were trying to accomplish, and we thought perhaps that was a problem we could solve on our own,” he says. Following that revelation Silver got to work on a “very expensive research project” to develop an algorithm that assesses content based on a number of attributes.

“What we were able to identify through months of research is a system of what we refer to as measures,” he says. “Our system has about 15 different measures, and each measure is meant to analyze a different component of an article.”

Measures range from paragraph density to the use of quotation marks, third party references and language sophistication, all of which contribute to a ranking out of 100, representing how successful the content will perform. Silver says a ranking below 50 won’t generate engagement, but 60 and above will. This story, for example, achieved a score of 67.

“Anyone who is producing a lot of content really needs to optimize the quality and performance potential before you publish it. Once it’s out, it’s too late,” he says. “We realized that we had an opportunity to fill an algorithm that we think is the first of its kind, one that analyzes content in a pre-amplification environment.”

The “preamplification scoring engine” also provides suggestions to improve content quality and success before it is published. For example, Atomic Reach’s dashboard informs the user when a piece of content is too long or too short, too sophisticated for their audience or not sophisticated enough, and if there are any spelling or grammar issues, or broken links.

With SEO dashboards now the norm in the content marketing world, Silver believes the tools like Atomic Reach’s content scoring engine will be a standard across the industry.

“We want to become the quality scoring standard for all media in the world,” he says. “Right now we’re doing articles, and by December we’ll be handling most other media formats, so tweets, video, audio, and email, among others.”

It appears that Canada and Bernie Sanders share a mutual appreciation. With all eyes focused south in 2016 on the US election drama, Senator…