Anthony Lacavera is best known for launching Wind Mobile and taking on Canada’s big three telcos (Bell, Rogers, and Telus). The David vs. Goliath odyssey lasted eight years before his company was snapped up by Shaw for $1.6 billion. Most would consider his exit heroic. Lacavera views it differently — he didn’t go to war with a three-headed oligopoly with fourth place in mind.

In his new book, How We Can Win, Lacavera is candid about why he fell short of his lofty goals to both revolutionize mobile and inspire disruption throughout our economy. “Unwittingly, we may have done the reverse, providing a cautionary tale about the futility of trying to challenge the status quo in Canada,” he writes, lamenting the lack of competition that plagues Canada’s banking, airline, and broadband sectors.

If investors want bigger exits, they need to take more risk and make the funding climate more hospitable to founders.

Books written by founders typically recast their biography as personal self help for aspiring entrepreneurs. But this book gazes at our collective future, re-imagining Canada as a nation that can attain economic glory if we’re brave enough to let go of the status quo. Concerned that our days of relying on oil to fuel economic expansion are numbered, Lacavera predicts our future prosperity is at risk unless we radically change our business culture.

Lacavera proudly lists all that Canada has going for it: an open society that attracts highly-skilled immigrants, a willingness from government to fund innovation, and top notch university research. So, where is our Google or Facebook?

Canada is great at trying but not so great at winning, or more precisely, at even bothering to define what victory looks like. Lacavera points out there are over 60 unconnected innovation programs spread over 17 government departments without a common evaluation framework. As a result, money is handed out for attempting innovation rather than pulling it off. Sales and marketing efforts, crucial to favourable outcomes, rarely qualify for funding. “Coming up with new and improved stuff and then discovering no one actually wants to buy it isn’t innovation — it’s a waste of time and money,” Lacavera argues.

I agree with Lacavera that our innovation strategy should borrow a page from Own the Podium — Canada’s successful Olympic program that prioritizes funding for athletes viewed as having the best shot at medals. If we can’t identify and support our most promising innovators, you can bet talent hungry giants like Google and Facebook will. It shouldn’t surprise anyone that many of our best disruptors are lured by the American path of least resistance (and higher reward) rather than face our outmoded regulatory and monopolistic market.

Lacavera is also critical of Canadian venture capital, which, in my experience, remains too risk-averse, often unwilling to commit funding until they see customers and lacking the long-term vision required to build true winners. Lacavera, of course, has firsthand experience, and I’m sure the quick flip by investors in Wind’s last recapitalization still stings!

It shouldn’t surprise anyone that many of our best disruptors are lured by the American path of least resistance.

Interestingly, the biggest complaint I hear from investors is that Canadian founders sell too early, yet rarely do they question how their own risk aversion may have contributed to an unsatisfying exit. Raising capital in Canada can be a grind, and founders generally operate with less capital and accept lower valuations. If investors want bigger exits, they need to take more risk and make the funding climate more hospitable to founders, including accepting failure as an inherent part of game, rather than pointing fingers.

Unfair or not, Canadians have a reputation of suffering from tall poppy syndrome. “While it’s socially acceptable to admit to an ambition to cure cancer or win the Stanley Cup, saying you want to build a billion-dollar business just sounds so… tacky,” writes Lacavera. This mindset needs to change. Lacavera does the math, “To get back up to three percent GDP growth, we will soon need to start adding about $20 billion to the economy every year — roughly the equivalent of adding a Blackberry (at its peak) annually.”

Certainly, Lacavera knows this is not an easy task. Yet he dares us to push the status quo and ask the hard questions. Canada has everything it needs to thrive. How We Can Win challenges us to go for gold and stop settling for anything less.

Disclosure: As Founder and Chairman of Globalive Capital, Anthony Lacavera is an investor in Espresso Capital. 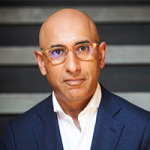 Alkarim is the CEO of Espresso Capital, one of Canada’s most active venture debt funders. Alkarim has been involved in technology investment banking, venture capital and venture debt for over 20 years, during which period he has advised or invested in over 200 companies.