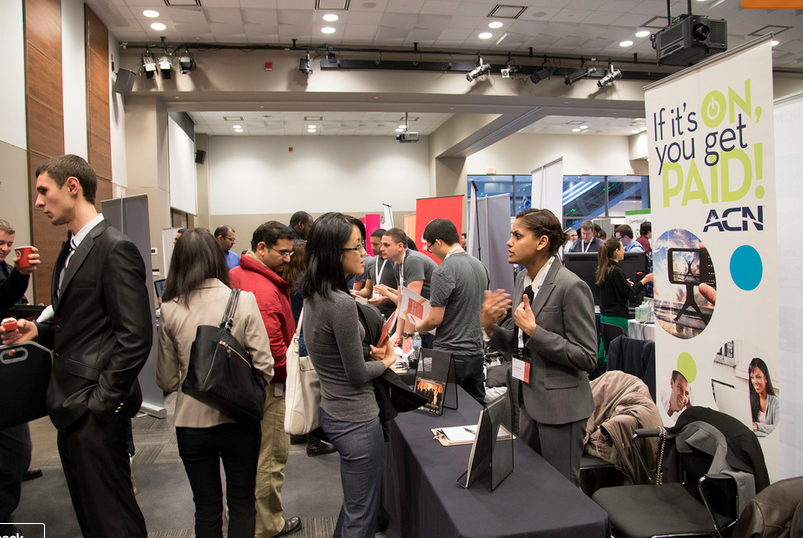 It was completely student-run, it was only the second iteration of the event in nine months and the University of Toronto organizers of the Startup Career Expo managed to attract 2000 attendees to the MaRS Discovery District on Tuesday.

The organizers are all part of You’re Next Career Network, an originally U of T network founded five years ago when engineering students decided to put on a small job fair on campus. Last year the group expanded operations to three unique events for students. Along the way You’re Next expanded the vision to make the events available to computer science, commerce and engineering students.

The largest of these events is undoubtedly the Startup Career Expo, which brings students together with high-profile startups for a full day of mingling and exhibiting. It’s a completely non-for-profit venture that puts revenues back into the business, which typically comes from startups or corporate companies paying to have a presence at You’re Next’s events.

Pua spoke about how the original Startup Career Expo attracted about 38 startup companies and 700 students. But along the way the organization realized if they wanted to influence the students they were catering to they probably had to lead by example and “go big or go home”.

“The goal wasn’t to initially make it as big as it was right now, we were thinking 50 companies and maybe 1000 people, but then about three months ago we decided we should try to be a bit more ambitious,” he said. “In order to change the mindset of students in entrepreneurship you should probably go bigger: the bigger, the better and the easier it is to influence people.”

So 2000 students showed up to speak with 80 startups who collectively were advertising over 400 entry positions or internships, in everything from developers (web, front-end, back-end, web, iOS, Android) to Product Managers to data Scientists to engineers to marketing people.

Pua said it was refreshing to see people actually engaged in the guidebooks (which he admitted at most events usually just a third of people look at). On top of that he said he saw attendees all across the age spectrum: from high school students to university students to older, more experienced startup folk.

“Everyone seemed like they were having genuine conversations so I think that was a good sign,” said Pua.

As for the third Startup Career Expo sometime in the future, he said while he won’t be running it he see’s no reason why the organizers can’t take it even bigger. “We had a wait list of startups that wanted to attend, so we can hit 100 or even 120 companies next year. Maybe 3000 people, maybe even a two-day event. There’s lots of possibilities,” he said.

Ask an Investor: What are the best alternatives to venture capital?