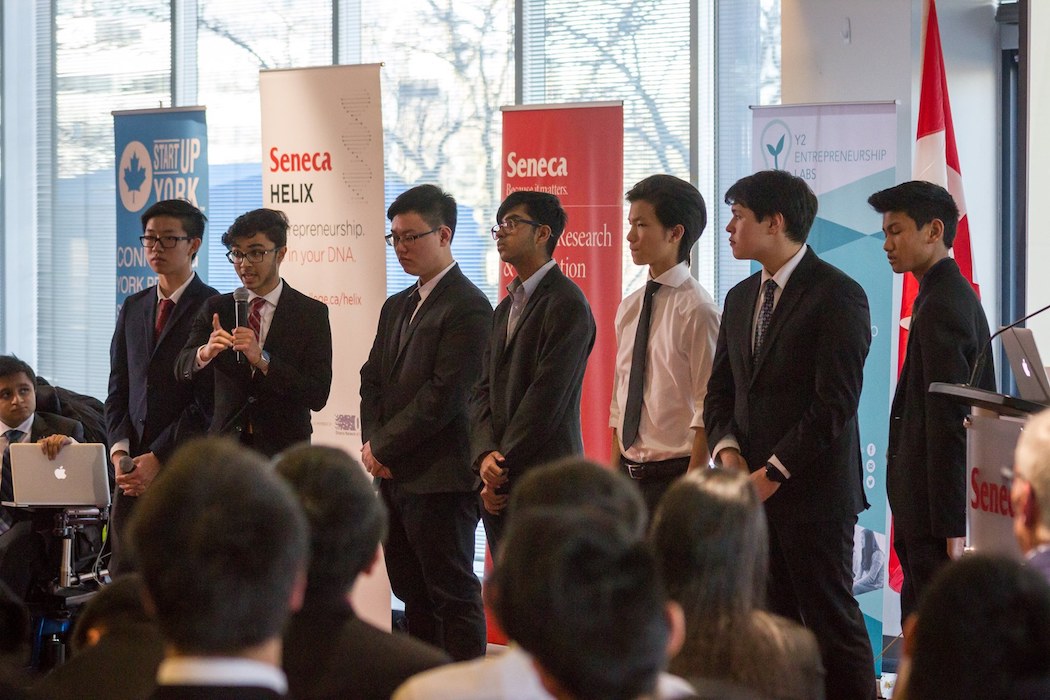 In March, the federal government unveiled its Budget 2017, with a focus on establishing Canada as a global leader in innovation. Part of that budget also included a commitment to support younger generations in tech and entrepreneurship. The Canadian government will dedicate $2 billion over three years for a Post-Secondary Institutions Strategic Investment Fund, and $73 million to support co-op programs for companies in in-demand fields.

A York Region-based program that is also working to bring an innovative, entrepreneurial mindset to teens and pre-teens before they begin their career paths is Y2 Entrepreneurship Labs (Y2 Labs).

In an interview with BetaKit, Chang said Y2 Labs is planning to bring entrepreneurship training and education to private and public schools across the GTA this fall.

“The challenge that [youth] face is that the resources available to startups are not typically tailored towards teens.”
– Lucas Chang

By entering classrooms, Y2 Labs will provide students in Grades 7 and 8, as well as high school students, with nine-week or 11-week sessions, which align with the Ontario Ministry of Education’s curriculum, and take students through different phases of launching a business.

According to Chang, Y2 Entrepreneurship Labs also plans to introduce office hours in schools, where experienced entrepreneurs will volunteer their time to mentor students and offer advice about any entrepreneurial ideas students have.

“The problem statement we are trying to address is for teens and pre-teens who are curious to learn about entrepreneurship, whether that means they’ve heard about the word and don’t know what this is all about, or they’ve got a business idea and they want some help to evolve it,” said Chang, who is also Y2 Labs’ director of programming.

Chang added that having an entrepreneurship-focused curriculum for youth is important because teenagers don’t necessarily have the same access to startup resources that older, more experienced entrepreneurs receive through incubators and accelerators.

“The challenge that [youth] face is that the resources available to startups are not typically tailored towards teens,” said Chang. “The incubators and accelerators, their application procedures, their office hours, their general access for teens isn’t good because it conflicts with the school hours. Teens have access to online…but it’s not going to be the same level of personalized support that a startup run by someone who’s 25 years old can get.”

While Y2 Entrepreneurship Labs hasn’t received the “final blessing” to run its program in GTA schools, Chang said the incubator ran a successful beta program at a private school in Spring 2017. Once Y2 Labs receives the final approval, the incubator will kick off its program in the fall and winter semesters in the York, Durham, and Peel Regions, and other parts of the GTA. The classroom sessions will be led by Y2 Labs’ own trainers and volunteer entrepreneurs.

“The whole purpose [of the beta program] was to give the students a chance to learn from someone who has done it as opposed to most of the teachers, who have not run their own businesses. The feedback from both students and teachers was strong,” said Chang.

“We wanted to give back to the community and continue to support entrepreneurs who wanted to create impact as well.”
– Diane Huang

According to Huang, a second-year commerce student at Queen’s University and co-founder of Y2 Labs, inviting local entrepreneurs to coach and mentor youth is not only a way to advance entrepreneurship education for teens and pre-teens, but also give founders a way to give back to the community. Speaking with BetaKit’s editor-in-chief Douglas Soltys (and a former judge at a Y2 Entrepreneurship Conference), Huang said the idea of Y2 Labs was born out of her and Chang’s goal of helping entrepreneurs give back.

“I told [Lucas] about my work with [Creativity Through Arts] and how I wanted to get more involved with the community as well,” said Huang. “I think we shared more of the same message that we wanted to spread and we wanted to combine our passion. We wanted to give back to the community and continue to support entrepreneurs who wanted to create impact as well.”

Chang added that Y2 Labs’ purpose isn’t encouraging students to definitively become entrepreneurs and build game-changing tech companies, but rather making entrepreneurial advice more accessible within school parameters and educating teens about entrepreneurship so it might be something they consider in the future. And for his own part, Chang said he’s passionate about investing in young people early, and he believes the best way to do this is by working with schools.

“The general belief is that by 2020 and beyond, skills sets that are going to be more valuable will be problem-solving, figuring out solutions, pivoting, understanding the user,” said Chang. “The school systems are moving in that direction but I don’t think that it’s necessarily responsible, fair, or right to expect that the school systems can do it entirely alone. I think that the entrepreneurial community already has a lot of those traits. We can help accelerate the learning of the students. It takes a village to raise an entrepreneur.”

Along with delivering its program in schools, Y2 Labs will continue educating youth about entrepreneurship through its two-part Y2 Entrepreneurship Conference.

Y2 Labs’s next conference is taking place on October 14 and October 21 at the University of Ontario Institute of Technology, where students will have the opportunity to take a problem they care about, form teams around the problem, ideate a solution, build investor pitches, and present to a panel of judges. Students will also have access to a mentor or coach that will help them apply their learnings from various workshops to their end-product or service.

Chang said the top two teams in the conference will receive a paid meal with an established, serial entrepreneur, gaining the opportunity to discuss and learn about launching, scaling, and pivoting startups in Canada.

Youth-led startups that met and formed at previous Y2 Entrepreneurship Conferences include Candy Cutlery, which creates biodegradable edible utensils to promote the importance of sustainability, and Müla, an app that help teens manage their finances and strengthen their financial literacy. Candy Cutlery, which has raised $10,000 in funding, was a winner at SAGE Canada’s national competition and will represent Canada in the global SAGE finals in Ukraine. Müla won the Ontario Centres of Excellence’s (OCE) 2017 Make Your Pitch competition at the OCE Discovery conference.

While Y2 Labs is currently focusing on hosting conferences and bringing entrepreneurship training to public and private schools, in the long term, the incubator is hoping to solidify its third and final stream: investments. Chang said in the long term, Y2 Labs plans to use the cash it generates from its classroom programs to invest in young entrepreneurs, while in the short term, the incubator will connect youth to angel investors and VCs with the aim of educating them.

“We can help accelerate the learning of the students. It takes a village to raise an entrepreneur.”
– Lucas Chang

“The reason for [investments] isn’t for us to make money. It’s more to push the entrepreneurial, the education, really getting to feel what it’s like to now have taken someone’s money and be accountable for it,” said Chang. “That process gives students education on how investments go, what investors look for…it’s not investment for the sake of investment, it’s kind of the next level of education.”

Overall, Chang stressed that as Y2 Labs restructures its program model, the goal isn’t to encourage youth to build monetizable and scalable businesses, but rather equip youth with the necessary tools and resources to understand entrepreneurship and consider it as a viable career path.

“The hope with Y2 is to give students the tools and the frameworks and information to point them in the direction of ‘okay, this is what you do next,’ and so there’s a chance of the students trying out and implementing their ideas,” said Chang. “Whether or not they monetize is a different question but if they implement their ideas, that’s a huge learning in and of itself. So if we help more students try, get them out there, get them feedback, get them beaten up or even succeed, then we’re helping to strengthen the next generation.”

Over the past week, two Canadian companies have made acquisitions of companies across North America. Here’s the latest on Canada’s movers and shakers. mCloud…