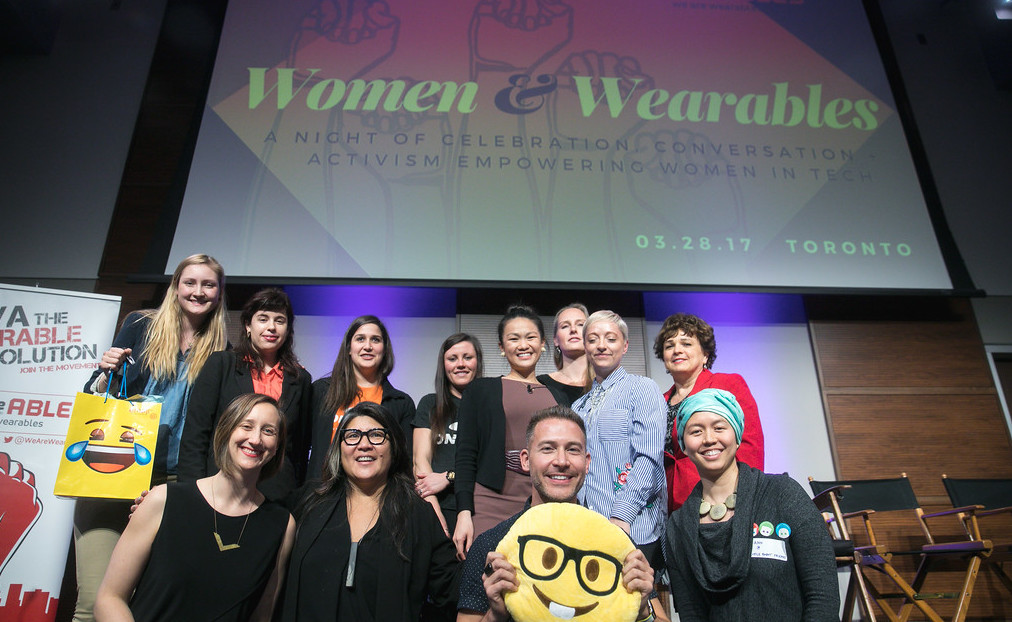 On Tuesday, We Are Wearables Toronto hosted its monthly wearables meetup by celebrating women in honour of International Women’s Day.

“I think the first discomfort we can all relate to is physical discomfort. We are all of the mind that we don’t want things to be too far, or the public transport is too crowded, or I don’t wanna be too late, so I have to figure out how to get there. Tech has provided us with a whole host of conveniences that fix these sets of physical discomforts,” said Serrano. However, when stories of sexism and problematic behaviour at companies like Uber become public, people still hesitate to remove the convenience from their lives even if it goes against their values.

“At what point do we decide that physical inconvenience is something that is way more comfortable than the actual discomfort of supporting a company that we all feel, at best, a little bit ambivalent about — at worst shameful at having to support?” said Serrano. “Discomfort is our ally. If you’re not feeling the pain of physical discomfort or the pain of social discomfort, then you’re probably not doing anything far enough to change the world.”

During the panel segment, InteraXon founder Ariel Garten said she didn’t feel that she struggled in the hardware industry specifically because she’s a woman — though she acknowledged that in the tech industry as a whole, there are challenges.

“I haven’t, in the world of hardware, come across any experiences in which being a woman has been detriment. I’ve definitely come across experiences in Silicon Valley where you’re not getting the investment or deals because you’re a woman, but it’s not specific to hardware,” said Garten.

Yvonne Felix, head of partnerships at eSight, provided her perspective on taking the plunge into a startup. Felix, who is legally blind and uses eSight to see, explained how her joining the company affected its structure.

“The device was not commercially available; it was big, it was black, the aesthetic was not taken into consideration. My first step into the company was at a VC meeting where I walked in and made my own eSight carrying case out of an old corset, and that was my first step into the company not just as a beta tester, but as someone who was going to help dictate what our next generation would look like,” said Felix.

“Being the only female at the time who is taking that step forward and saying ‘I know think it looks cool, however, only the eight engineers want to have it look like that’.”

Lyssa Neel, CEO and co-founder of Linkitz, echoed the importance of having visible women as the face of a tech company; she pointed to the early days of the personal computer as an example.

“In computer science, the line [of women entering the field] went up, up, up until about 1983 and then in plummeted. The reason is because there’s a correlation that when the personal computer was introduced, it was marketed as a toy for boys,” said Neel. “Boys got more coding experience and confidence, and guys are full of confidence, while girls tend to underplay their experience generally. They attribute a drop in women in computer science to that year.”

The event also hosted to the Female Founders Hardware Cup, which selected one of six startups to compete in the Pittsburgh-based National Cup for $50,000. Penta Medical, which is building a wearable device to help athletes their industries, ended up winning the competition.

“I should say that we can get on this stage and talk about discrimination that women face in technology, we can get on stage and talk about how women earn 75 cents on the male dollar, and I think those conversations are important,” said Cosco. “But I think it’s also important to highlight the achievements of women in tech and talk about how these women are successful, not in spite of the fact that they’re women, but because of the fact that they’re women.”

Two Canadian startups in Vancouver’s Rosterbot and Whitby’s Enginuity Search Media have been recognized  among 50 startups across the world among the “GEW 50”,…