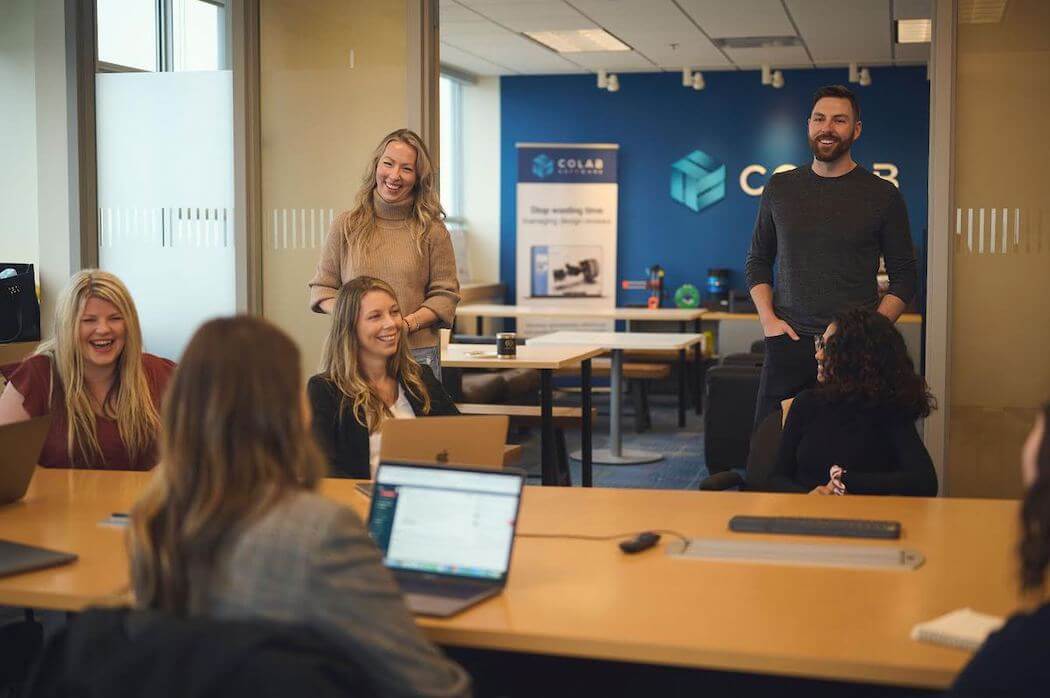 With its new $21 million CAD ($17 million USD) Series A funding, Newfoundland’s CoLab Software is set to double its 54 person team as it prepares to build awareness of its computer-aided design collaboration and communications platform.

New York-based global private equity and venture capital firm Insight Partners led the round. New and existing VCs and angels participated, including individuals from Xometry, Onshape, GrabCAD, Bosch, Tesla, and Atlassian. CoLab did not disclose the names of the investors.

CoLab sells its software to large Fortune 500 companies such as Johnson Controls and Hyundai Mobis.

The round closed in mid-October for CoLab, which makes a platform that enables manufacturing teams to share computer-aided design across their teams, and get feedback in real-time.

Adam Keating, co-founder and CEO of CoLab, told BetaKit the startup had 18 people when the pandemic first started. It plans to hire another 25 with the funding now in place, and a further 25 in the first quarter of 2022.

“If you looked at our team either months ago, it was probably 85 percent technical product people,” Keating said. Over the last six months, CoLab began making more hires in the areas of sales and marketing.

Keating said moving forward the startup will be focused on marketing, education, sales, “really helping this technology we’ve built get in and work for the customers.”

CoLab sells its software to large Fortune 500 companies such as Johnson Controls and Hyundai Mobis. “We really focus on teams that are building complex mechanical or physical goods, typically distributed teams,” Keating noted.

Elaborating, Keating pointed out, “We see ourselves not just as a software product, but a new way of working together as engineers.”

Keating asked the rhetorical question, “how do we actually innovate better as a distributed group building a complex product that’s now becoming not just mechanical? It’s mechanical, electrical, and software and all sorts of other stuff. We see ourselves being the ones who help these teams figure that out. “

Keating maintained that looking at surveys from the large computer-aided design and product lifecycle management companies, their challenge is almost always communication, and using the right data to make decisions.

“It shows a problem that’s very hard to solve,” Keating said. “We dove into it head-first for the last four years and we’ve got some good traction now, and some really good ideas. The Series A is the catalyst for us that really lets us go after the big picture.”

According to Keating, Insight Partners led the round because it understood what CoLab is trying to do. He said the equity and VC firm has invested in three or four other companies in a similar space: the manufacturing SaaS market.

Founded in 1995, Insight Partners has invested in more than 400 companies worldwide and has raised, through a series of funds, more than $30 billion in capital commitments

Josh Fredberg, managing director of Insight Partners, will join CoLab’s board of directors. “He’s built a portfolio within Insight that focuses on engineering SaaS,” Keating said. “His focus is really narrow and very near and dear to our hearts.”

But explaining to companies what it is they have to offer is also part of CoLab’s challenge. Keating explained the category the startup is in is something CoLab is creating, so not a lot of education around it exists.

“We’ve had a really small marketing team up until now,” Keating said. “Post-Series A we’ll be spending a lot more time on education and awareness. For us, what we found is once teams understand what we do exactly, it ties right back in with all the things they’ve been struggling with for ages.”

Keating founded CoLab with Jeremy Andrews, the company’s CTO, in 2017. Both studied engineering at Memorial University of Newfoundland, but didn’t collaborate together until earlier in 2017.

At that time, Keating was leading a team of students across six universities in the Space X hyperloop competition, and he recruited Andrews to that team. They ended up building one of the first hyperloop vehicles in the world, and came second to a German team backed with millions of dollars.

CoLab raised a pre-seed round of $600,000 CAD in 2018, and then in 2019 became the first company from Atlantic Canada to be accepted into the Y Combinator accelerator program. The firm raised a seed round immediately after, worth $2.7 million CAD.

Until he participated in the hyperloop competition against all the big teams, Keating didn’t really believe he could start something from Newfoundland, and build something that mattered. Now he points to a company like Verafin, the St. John’s startup that the NASDAQ acquired for $2.75 billion in cash in 2020.

Ten years ago, Newfoundland had a much quieter tech ecosystem, according to Keating. But he said adding 10 or 15 companies like Verafin or CoLab to a place the size of Newfoundland, and “that changes the entire place.” Keating said he’s aware of several other Newfoundland companies that will have announcements in the coming weeks.

That said, if he had to do it again, Keating would likely do it differently. “If I was to start a company from scratch four years ago and tried to pick one that was easier to scale in the beginning … this would not be the space because the space is very complicated,” he laughed