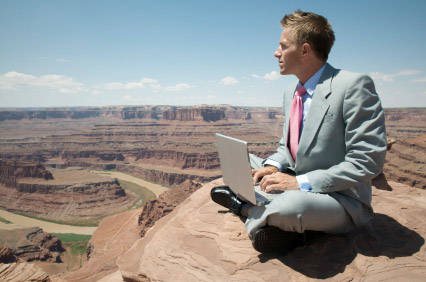 Last year in December of 2013, we made a decision to give up our office space in the Accelerator Center in Waterloo and become a remote company. As a start-up our pie in the sky vision is virtual organizations and remote teams — it was time we ate our own dog food.

Going remote was not a hard transition: we had already been working on different schedules for the past year. I usually worked the 9am — 6pm route. Our then Business Development and Channel person would work 2 days a week — 10am till 2pm. Half the Dev team would come in at 8pm and work till 8am. I’d always catch someone going home as I’d head in every morning.

Essentially we were functioning as a remote team even though we had a physical space with desks, chairs, a fridge full of coke and assorted art. On some days it was just me at the office during regular hours working away, as everyone else dropped in or out. The choice to use the facilities or not was entirely yours with no pressure to be working during certain hours.

This was not planned, but it is how evolved. Scott Berkun in the Year without Pants mentions culture as “a system of people,” and that’s how our system worked best: I worked best out of a coffee shop one day a week while one of the developers did his best work between the hours of 10pm and 6am.

Presence was not required, which implied trust in you getting your work done. The developers pushed code and features, I ran marketing campaigns, tested new commits, tracked metrics, built and A/B tested landing pages, tracked conversions and cohorts, setup sales calls, wrote blog posts and dabbled in product & design. We built a estandup in Organimi and every week we’d have ‘”Demo Tuesday,” where we’d come together, talk about our projects, work and discuss metrics.

As the engine began to hum, The Office turned into a dysfunctional & expensive postal box number. So in December 2013 we decided to leave our physical space behind and function as a true remote company.

As an organic evolution of the way we work, this did not present a massive cultural shift. Indeed it also gave us the the flexibility to work from where ever made sense (for me that meant a coffee shop with comfy couches) or even in our pajamas.

Since December 2013 we have seen some great growth as we find a product/market fit: this is not to say being a remote company was the sole reason for this growth but rather to point out  that  growth and product did not suffer from the lack of physical context.

So why aren’t more companies going remote? As I started bringing this up I often hear a variation of:

The assumption here is that sitting in the same space as everyone else somehow makes the ‘magic’ happen. Or does it?

Sure being remote doesn’t make up for everything (like free catered lunches) but there can always be a monthly/quarterly face to face. WordPress does it. So does Buffer and 37 Signals.

The ‘magic’ can happen over email, Skype, GotoMeeting or Screenhero. There’s been no substantial evidence that physical presence implies great work or productivity. On the contrary what if there was a freedom to work from whichever place inspires you the most?

Does real work happen at the office or is it a space full of interruptions, small talk and meetings (with PowerPoint presentations)? Imagine not being nagged; even if you have your headphones on and getting in the flow.

“Offices have become interruption factories. A busy office is like a food processor — it chops your day into tiny bits”.

Culture is not free food, ping pong and happy hours. Culture is about your values (as a company and team) and how you work together. Sure there needs be some basic alignment between the individuals work ethics and values and the company.

But Cultural fit is hard to assess from a crafted resume or a interview — you can’t tell how the person works or how he or she reacts under pressure.

You can, however, figure it out pretty quickly through a small project together over a couple of weeks. Does this person deliver what as promised on time? Does he or she realize communication is key especially when your remote? Meet up once a quarter in person to catch up and have some shared experiences. The traditional hiring process is broken, so instead of building new apps to optimize it, why not just rebuild the paradigm and system from scratch

“Its hard to find good talent”

“There’s not enough engineers or designers or good marketing folks to go around!”

Well, to be honest, there’s really brilliant folks and engineers in particular in countries like Pakistan, India, China, Bangladesh and Indonesia who just can’t immigrate half way across the world due to visa, financial or money constraints. Sure it’s hard to find someone good via Elance or Odesk; everyone’s had a terrible experience but that’s not the sum of it. Being open to remote work does open up a massive talent pool if your willing to do the leg work, dig and screen applicants.

Working remote opens up a world of possibilities: two weeks ago, I was on a train across Canada and hiking in the Rockies — all the while still answering urgent emails and even pushing small changes to the website.

Go slow and let the natural evolution of your work happen at its own pace.

Kamil Rextin is an MBET Graduate from University of Waterloo with a couple of failed startups under his belt. He is currently working at Organimi in customer success, marketing, and product management. Kamil also develops apps on the side for fun. When not working he enjoys reading fiction and non fiction, video games, and anime. Deep down inside he still believes in elves and hobbits.

Ask an Investor: What should I look for in my first external sales hire?