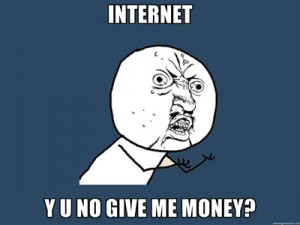 It’s been official for about five or six months now: the crowdfunding craze has hit entrepreneurs and startups. An ordinary, publicized startup launch is “so 2012”.

Apparently, now its all about teams who haven’t done anything, but have a really sweet idea and are in need of the funds to do it. And the request for media coverage has certainly matched that mentality.

Over the past few months I’ve struggled over this very issue, as literally dozens of startups every week pitch BetaKit about their crowdfunding campaign that is going live.

I wondered why a startup without a working prototype, without any work done yet, and without having shown the ability to go out and raise a bit of cash from family or friends, should receive media coverage. Particularly over another startup that is launching after a year of bootstrapped coding.

I’m aware that this could be comparing apples to oranges, as many crowdfunded projects are hardware-based, which costs money. Coding in one’s parents basement for a year and showing off a fancy web platform at launch, meanwhile, doesn’t cost as much. (On Indiegogo however, most ideas, hardware or not, can be crowdfunded).

I’m also not implying that we’re some sort of holier-than-thou, almighty gatekeepers. Rather, tech blogs get hundreds of pitches a week. Theoretically their job is to give publicity to the most deserving startups (the ones who are doing the coolest things that will benefit lots of people).

Someone’s desk magnet that goes live on Kickstarter tomorrow shouldn’t constitutes news. So why should someone with no work to show receive coverage?

By doing that it’s possibly even a disservice to hard-working tech entrepreneurs who actually created something before launching. There’s a certain amount of stories that a publication can throw at the public, and undoubtedly, one startup’s coverage means another just got bumped aside.

On the other hand,  I’ve had the privilege to report on amazing Kickstarter or Indiegogo campaigns absolutely blowing by their funding goals. Now that’s front-page news, and it represents a fair estimate of user validation on a large scale.

As a cofounder of the crowdfunding consultancy SeedingFactory, Heri Rakotomalala should be a cheerleader for any crowdfunding project. But he also puts on the journalist hat at times, having contributed to Montreal Tech Watch. Thus, he too receives tons of pitches from startups seeking to publicize their launch, as well as crowdfunding campaigns

He said its easy for people who don’t have a working product to create a kickstarter campaign. Mature startups, however, will launch a crowdfunding campaign for either validation or marketing reasons. “What’s accepted today is usually because they already have a product and they use Kickstarter to fine tune, to validate, or to see what works best,” said Rakotomalala.

He even pointed to the recently (extremely) successful Hexoskin biometric shirt campaign, which raised $108,000 in two weeks on Indiegogo. Rakotomalala said the company used the platform as an ecommerce play. The company actually launched two years before its Indiegogo campaign, which was a well-put together, polished campaign page. “It was perfectly valid, so instead of having an ecommerce store they did it there,” he said.

“Crowdfunding is really good for validating an MVP,” Rakotomalala told BetaKit. “You’ve been working on your startup for six months, you got some funding and you have something that works: do you launch? Instead, you have the option of a crowdfunding campaign. In that sense it sounds like a marketing campaign, it’s a good way to reach the people.”

Receiving funding or getting accepted into an accelerator can go hand-in-hand with media coverage for a launching startup, so I asked JS Cournoyer of Real Ventures and Ian Jeffrey of Montreal startup accelerator FounderFuel if they would fund a team with nothing but a crowdfunding campaign.

Largely, Cournoyer said that if a startup is launching on Kickstarter, “then they have nothing. Its just an idea.” But he also revealed that Real Ventures has funded teams with just an idea before. He said if the team is amazing and the idea is great then there’s nothing stopping him from betting on it, even if the only thing they have is a Kickstarter page with $217 dollars raised.

Jeffrey chimed in and said that if the team is solid, why not try and raise $100,000 of free money to get started, and then begin courting VCs?

But would FounderFuel accept a team with nothing but an idea? Jeffrey said it’s possible. “FounderFuel invests much more in the mind set of the individuals than in the actual state in the business or the space,” he said. “At the end of the day we’re looking at what they’re looking to accomplish in the program more so than hardware or software.”

The accelerator will not accept in an exclusive hardware-focused startup unless there’s a significant web component to it. Last year reelyActive participated in FounderFuel, a hybrid hardware, cloud-based startup that connects the physical and the digital worlds using “reelceivers”, or little keychain-sized location devices. Jeffrey said the startup’s web platform makes it more interesting than the actual hardware. “The main distribution method needs to be web or mobile, because that’s what brings the potential for virility to kick in.”

Returning to the subject at hand, while some crowdfunding launches are interesting and look like they might be cool, largely its often more newsworthy to cover a launching startup with a finished product that can help people (today).

Jeffrey once ran a startup in Silicon Valley and is all too familiar with the constant task of trying to publicize a company. But he said “at the end of the day, everything needs to be earned.”

“There’s a glamorization aspect with startups. The danger is that the entrepreneur thinks that people owe them, whether that be press or investors.”