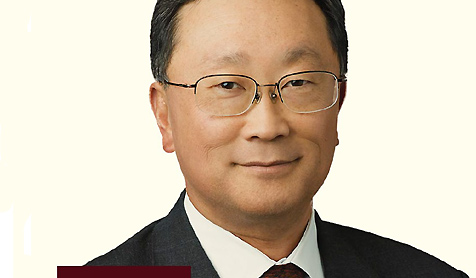 News struck quickly this morning that BlackBerry, the embattled Canadian smartphone maker that had apparently found a buyer for its assets in FairFax Financial Holdings, will now abandon plans to sell itself. Instead, the saviour angel of the past year Thorstein Heins has been shown the door, while former former Sybase AG CEO John Chen becomes executive chairman, effectively making him the man in charge.

Naturally some will wonder, who is the 58-year-old John Chen? Can he turn around the company that has been in an all-out free fall for the past few years? Can an infusion of about $1 billion from institutional investors, coupled with fresh blood in Chen actually lead to the day where we’re all buying BlackBerry phones again?

To say that Chen has a big job ahead of him is an understatement, but the new leader comes in with an impressive track record.

For starters, the former CEO of Sybase had a hand in the 2010 sale of the company to SAP, and led its turnaround from a market cap of $362 million to a whopping $5.8 billion before its acquisition. He led the company away from databases and into mobility, and the acquisition remains a large part of SAP’s growth strategy going forward.

The Globe and Mail’s Sean Silcoff evidently asked himself the same question I did upon hearing of the news this morning, and reports that while Chen came form humble beginnings (the son of poor refugees from Hong Kong) he went on to study engineering at Brown University, an Ivy League school. After graduating he took a position as a design engineer at Unisify. He took on senior roles at Pyramid Technology Corp. and Siemens Nixdorf before joining Sybase as COO in 1997, moving up to the job of CEO and president in November 1998.

Silcoff dug up this quote from Chen, who told the New York Times in 2006 that he thought to himself, “wouldn’t it be great if we could exploit what we know and then skip a generation and go ahead of our competitors and become more relevant.”

“People were laughing at us for getting into mobility so early and they were saying there’s no money there, wireless is just a dream and everyone’s losing so much money. We are now the largest enterprise software provider in wireless technology,” said Chen.

The success at Sybase propelled the CEO to board jobs at Walt Disney Co and Wells Fargo and Co. in 2004 and 2006, respectively. He has also served on the board of the CIT Group Inc., and as a member of the New York Stock Exchange’s listing advisory committee. He’s familiar with startups too, serving on the boards of Beyond.com, Niku Corporation, Wafer Technology and Turbolinux US.

In a release this morning he said that BlackBerry is an iconic brand with enormous potential. “But it’s going to take time, discipline and tough decisions to reclaim our success. I look forward to leading BlackBerry in its turnaround and business model transformation for the benefit of all of its constituencies, including its customers, shareholders and employees,” said Chen.

Just one week ago the tech world was ready to accept an acquisition by FairFax, as the BlackBerry name quietly dissolved out of our peripheries. But now with new cash and a new leader, that world will place an even closer eye on the decisions this company makes going forward.