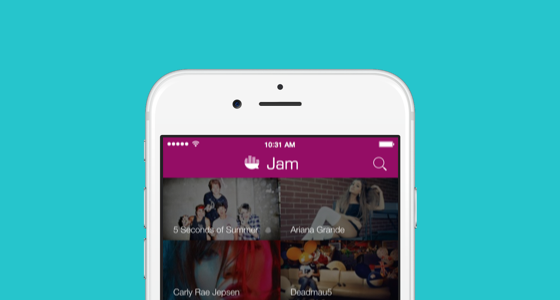 Waterloo-based Kik is attempting to up its game by launching a new music-based chat service within its popular messaging app.

Dubbed Jam, the service aims to connect Kik users with bands and solo musicians, and is launching today via a limited beta.

It’s built around artist profile pages, which users can find by searching for them. Each profile is home to photos, YouTube videos, bios and links to purchase merchandise and tickets to upcoming concerts. However, the real purpose of the pages, according to Kik, is to meet people with interests in similar music. Once they arrive on a profile page, Kik users can “check-in,” basically stating to others that they’re down to chat.

“Jam was inspired, in part, by the success of a similar project we ran for One Direction in 2013, where 1.3 million people checked in to the band’s Kik profile,” says the company in a blog post. “In that case, the site was publicized for only a limited time, but we found that fans were still checking in to the site even 18 months after the campaign ended.”

With some 200-million registered users, Kik is considered one of the leading competitors to Snapchat. According to TechCrunch, many of the people using Kik are either teens or young adults that live in North America and Europe. Viewed through that lens, the decision to add a music-based feature to its service makes sense. With music being such an integral part of one’s identity at that age, this feature will help the service appeal even more to the 25 and under demographic. Moreover, in many ways this is a return to its roots for Kik. In 2010, the company attempted to launch a music service, though it never got off the ground.

The timing of the launch is a bit strange, however. Back in April, Kik announced via an interview founder Ted Livingston had with Bloomberg, that it was for sale.

No word yet on when the service will be available to most users.