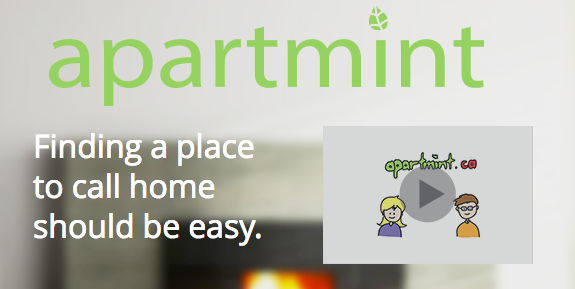 “I think there’s a lot of problems in this industry in general and I haven’t seen something come forward and try and solve it.”

Sounds like a statement we’ve heard all too many times before from startup founders. The quote came from long-time landlord and current Waterloo-based startup founder Margaret Cichosz, who launched Apartmint with Ignacio Mongrell, 28 and Davy Chiu, 28.

Apartmint is a new online platform with iOS and Android apps expected to launch within the next few weeks. It facilitates finding an apartment for renters, screening a tenant for landlords and online rent payments. It also provides in-person and online virtual walk-through tours via a third-party technology, particularly useful for new tenants coming from overseas.

Cichosz told BetaKit that she managed her first apartment building when she was just 15-years-old, a part-time job looking after the 28-unit building that her parents owned. Over the next ten years to today she saved up money from work and university co-op placements and began making investments in real estate with her sister. The pair currently possess a portfolio of several different units.

It means that Cichosz is well-versed in problems that arise with tenants and also with those who are providing the spaces in landlords. “I’ve seen so many tenant horror stories and issues tenants had with previous landlords,” she said. “We randomly stumbled upon this idea and I thought something has to be done to make everything better.”

Along with a nice map-search function for renters looking for their new place, the platform also has a ratings and review system for both renters and landlords, much like Airbnb or Uber. Scheduling appointments and even application forms can all be done through Apartmint, as well as monthly rent payment.

There’s no doubt that a good, solid Canadian platform like this has so much opportunity. I’ve switched apartments several times and I always resort to Craig’s List or Kijiji, every single time. With both there are so many limitations, whether it be unresponsive posters or scam artists. Eventually one gets good at navigating through all the crap on Craig’s list, but it shouldn’t be that way. Someone should come along and provide a highly-trusted, efficient platform that can handle everything- from initial viewings through to monthly rent payment. Could it be Apartmint?

The iOS app is due out in a few weeks with a full launch of the product expected in a month.

Initially the cofounders sought to create a solution for landlords only. They had so many problems with bad tenants that they created a tenant review platform. Eventually a pivot was necessary.

“It wasn’t really something that our customers would pay for,” said Cichosz. “So we went back to the drawing board and it took us about eight months to figure out everything, constantly going to our customers and figuring out what exactly they needed.”

What came was a the current bundled solution for both landlords and tenants.

Cichosz recognized that her competitors are companies like Craigslist, Kijiji, Toronto’s ViewIt.ca, PadMapper and even Vancouver’s RentMoola, which handles payment processing. Her biggest perceived competitor in the US didn’t have any immediate plans to expand for Canada so it seemed to work out for the 25-year-old and her team.

Following Canada, Apartmint wants to focus on latin America, bypassing a crowded US market. Monetizing may be tough: they’re planning on earning money off of $3 posting fees for landlords as well as about $150 for full tour services, virtual and in-person. The platform will also make money off of payment processing and possibly even other handy services for landlords. Success isn’t impossible, which is what makes the startup space so alluring.

For now the team is eyeing its full launch and even considering a local accelerator in Waterloo. And that’s all on top of their regular 9-5 jobs.

On May 5, Salesforce touched down in Toronto for its Salesforce World Tour, which was meant to give attendees perspective on connecting with customers…