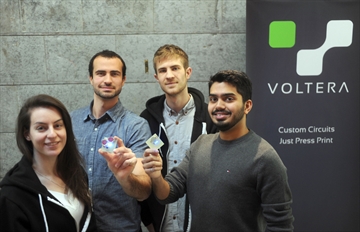 A pair of mechatronics grads from the University of Waterloo have launched a startup that prints electronics, from another great article to come out of the Waterloo Record lately.

Alroy Almeida, Jesus Zozaya, James Pickard and Katarina Ilic have formed Voltera, Inc., a new startup working out of the VeloCity Garage in downtown Kitchener, that is working on a device that will print circuit boards within minutes using special inks that conduct electricity. Amazing, isn’t it?

It’s similar to a 3D printer and has already printed little circuit boards using trace amounts of this special ink. Almeida told the Record that supporters have said it will “revolutionize electronics”. Considering that every new electronic device needs a circuit board, or the “spinal chord of any electronic device,” this can be a fairly well-monetized product.

Apparently the idea originated when Almeida, Zozaya and Pickard went off to work placements while still in school. Whenever they needed a new circuit board they’d have to wait weeks.

“If you are a hardware company and you want to develop circuit boards or develop your own electronics, the bottleneck right now is in the board itself,” Zozaya told the Record.

Creating circuit boards actually uses small amounts of copper, but when one removes uneeded portions, toxic chemicals must be used. Voltera sought a new solution, one that would run alongside the 3D printing paradigm. Rather than plastic, they’re using ink.

Reporter Terry Pender explained that the printer Voltera has come up was built on top of the principles of nanotechnology- “a fancy name for a material science that manipulates the molecular structure of something — such as the silver particles in the special inks — to change the properties to suit the developers; in this case, an ink that turns into a nearly pure, impossibly thin line of silver.”

The tiny pieces of silver fuse together once the prototype is heated up, creating electricity-conducting materials, like circuit boards. “If you want these conductive traces more conductive, more structurally supportive, nanotechnology helps you achieve that,” Ilic told the record.

The startup said that the printer can enable the “Internet of Things” revolution more easily, where electronic applications in the same area can “talk” to each other, communicating levels, and needs, controlled by smartphones and tablets.

As well, the startup predicts that going forward we’ll be seeing much more hardware-based startups than software and apps.

Photo from The Waterloo Record