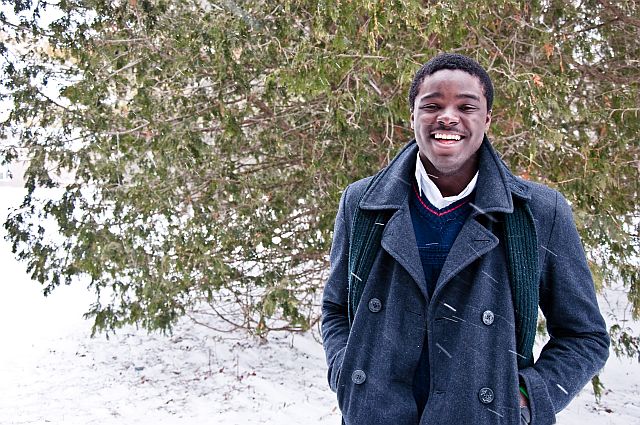 Typing “Nigeria” into Google today will land you several news articles on the mosque attack in the northern part of the country. But yesterday the same search would have led to this BBC post, pointing out the Sub-Saharan African country as a potential emerging economic giant.

It’s an all-too-familiar refrain for Fora cofounder Iyinoluwa Aboyeji, who splits his time between Waterloo, Ontario and Lagos, Nigeria’s most populous city. On one hand the country’s age bracket bodes incredibly well for a young, able-minded and able-bodied workforce, as do oil deposits and improved internet infrastructure. On the other hand, endless private sector corruption, political infighting and problems in education accessibility remain for the nation of nearly 170 million.

Aboyeji- who goes by “E” back in Waterloo- cofounded Fora with the objective to help Sub-Saharan Africans access higher education courses online. They can pay in their native currency and access resources like learning centres with solid Internet connections, provided in part by Fora, all the while avoiding a move away from their families and stable jobs.

Two of Aboyeji’s cofounders, Ian Carnevale and Nadayar Enegesi work out of Waterloo. The company was originally conceived in May at the University of Waterloo’s VeloCity Garage, and is also affiliated with MaRS Edtech.

Sufficient education levels among Nigerians, said one interviewee in the BBC report, “is just not there.” But Fora is trying to take a dent out of the impact. The startup offers accredited online university courses from some of the most prestigious or otherwise internationally-recognized schools (MIT, Princeton, Columbia, etc.). To do this they’ve managed to establish partnerships with online education providers- middlemen,really- who have already established revenue-sharing agreements with the universities in return for course material that’s taken online.

The cost for a recent graduate or working professional in Sub-Saharan Africa isn’t free, but when 500 potential students want to take the same course, it gives Fora leverage to negotiate a lower price with the providers. Besides Fora, the options are slim for these learners, particularly if they aren’t extremely rich. Payment plan options are available for an extra fee if learners can’t immediately pay the full price, and the option to pay in the local currency and to work out of learning centres is a big benefit. Nigeria particularly possesses a huge population of people eager to access higher education, but limited by still-improving infrastructure.

As Aboyeji told me, a massive amount of Nigerians move abroad to access higher education every year, and the demand is only growing. “I’m sure you had a Nigerian in your class when you were in university,” he said.

Most of Fora’s clients are Nigerians, and most of the marketing targets them too. But anyone located in the sub-saharan African nations can take advantage of Fora’s platform (so long as they have Internet access). More than 1000 clients are using the platform currently.

Aboyeji came to Canada in 2008 when he was 16 and eventually studied at Waterloo. I asked him if part of his motivation came from the fact that millions of Nigerians will never have the opportunity to study abroad like he did. His family wasn’t “wealthy” he told me, but they sacrificed enough so that he and his siblings could get an education. He said giving back is his prime motivation, particularly after he returned to Nigeria for the first time and realized how poor the higher education options are.

“More than half of the profs in Nigerian universities don’t have PhDs, a lot of them just have bachelors. Every year about 1.4 million kids try and get into the university system but they only take 120,000, so the rest of them try again the next year,” said Aboyeji. “There’s barely enough space for people and basically there’s all these challenge for the system because its young, publicly-funded, government-dependent, and theres all kinds of political problems within the universities.”

With Fora, it might be a Nigerians only reliable option, he said.

“We are really the only alternative for people without incredible amounts of money, or who are not in the same position to make sacrifices that my parents were able to. This could be the only way they’re going to get an education, by doing it online, and they’re able to do it in their home country while receiving an education from a world-class school.”