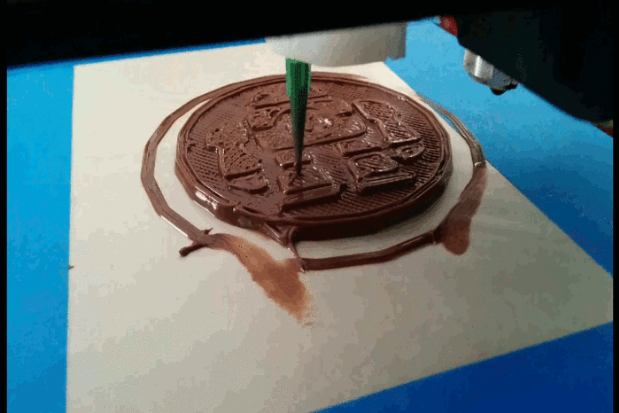 3D printing has boldly made its way into the consumer market. But most desktop printers are limited to printing plastics which limits what can be created with these machine despite the fact that they are capable of doing more.

Today a Waterloo-based company that has created an accessory for 3D printers blew by its crowdfunding goal in mere hours. The Structur3D extruder now stands at $30,815 raised on a $30,000 target. The gadget unlocks 3D printing potential, allowing it to go beyond plastic to print with silicone, wood filler, cookie dough and even nutella.

To do this, Structur3D has invented a universal paste extruder, an add-on that works with virtually any filament desktop 3D printers including those from popular like MakerBot and RepRap. This means that you don’t have to go out and buy a whole new printer to create things out of new materials. Once set-up the Discov3ry Extruder can handle a vast array of materials beyond the typical PLA or ABS plastic from clay, play dough, wood filler, silicone, chocolate, cake frosting, fondant, cookie dough, meringue.

“Discov3ry expands what is possible with virtually every 3D printer already out there, allowing for more creativity than ever before in 3D printing,” said Dr. Charles Mire, CEO and co-founder of Structur3D Printing.  “We are excited to get it into the hands of the maker community because we know they’ll come up with uses for paste printing that we haven’t even though of yet.”

The story behind the extruder is one of two passionate researchers building this product out of need. Andrew Finkle and Charles Mire met at KwartzLab, a makerspace based in Kitchener-Waterloo, and realized that they had both been working on PhD projects that needed to extrude and print with paste materials. Andrew had been doing research which involved printing natural nano-materials to 3D print the wall of a tree cell. While Charles’ research involved investigating the properties of specific hydrogels, biopolymers and conductive polymers, and wanted to observe how they behaved when extruded.

In their partnership, they found that their experiences and skill sets were very complimentary. Charles had made more progress in understanding the challenges of extrusion, and Andrew, having built a RepRap printer at home, had more understanding of the mechanical and electrical functioning of a 3D printer. Together they formed Structur3D Printing to create Discov3ry.

The Communitech Hyperdrive company recently unveiled its paste extruder in May of this year at the 2014 Maker Faire to get some market validation as well as to show people what a 3D printer is capable of when the add-on is installed. According to Structur3D, interest in paste printing has come from a variety of groups, from makers who are interested in doing more than printing plastic Yoda heads, to those in the medical field looking to print biomedical applications from prosthetics, hearing aids and surgical implants out of silicone. There has also been strong interest from educators who are looking to switch out the use of plastic in 3D printers in the classroom for more approachable and environmentally friendly materials like play dough and icing sugar.

Structur3D Printing just launched its Kickstarter campaign today to raise $30,000 to fund a production run of at least 100 units of the Discov3ry. And from the looks of it, people want to make cookies with their MakerBots! The Discov3ry campaign is nearly funded with over $30,000 raised at the time this article was written and that number is climbing fast. Backers can grab the extruder for $249 which is expected to ship in October of this year.

Four Canadian companies have filled positions on their leadership teams. Here’s a breakdown of who is joining and what they bring to the table….