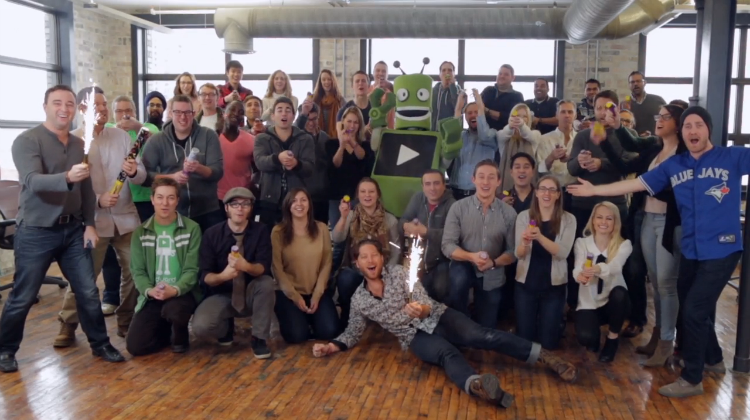 Kitchener-based Vidyard just announced an epic $18M series B raise, because we’re all watching videos, all the time.

“The future of Internet is TV,” Michael Litt, CEO and co-founder of Vidyard told BetaKit. “Consumer behaviors often predict enterprise trends. Going forward, more and more people will expect to buy and sell with video. We provide technology to enterprises to capitalize on this shift in consumer demand.” Cisco says 80% of internet traffic by 2018 will be video, and Vidyard, which started as a video production company and has since gone through Y Combinator, knows exactly how to make your videos work.

“The future of Internet is TV,” – Michael Litt, CEO and co-founder of Vidyard

Vidyard provides a video marketing platform to its enterprise clients, over 150 agencies and strategic technology partners, and an easy way to track consumer behavior and drive sales. No matter where the video lives. Once it’s uploaded, Vidyard gets the analytics.

Marketers typically use Vidyard to split-test video thumbnails, insert CTAs, and measure video performance. Vidyard tracks every video view, and lets marketers nurture leads, develop ROI, and see how well their video is working for their audience. The real magic comes with the CRM integrations and partnerships with Salesforce, Marketo and Eloqua, another Canadian company success. Unlike Eloqua, which ultimately flew south from its humble Toronto homestead, Vidyard is committed to staying put and growing the tech ecosystem in Southwestern Ontario.

Series B brings the total Vidyard fund to $25 million. This round is led by Bessemer Venture Partners with participation from existing investors iNovia Capital, OMERS Ventures, Salesforce Ventures, and SoftTech VC.

Meanwhile, over at BVP, Byron Deteer, who will join Vidyard’s Board of Directors, has issued a celebratory statement called “A Video Is Worth 18 Million Words,” in which he writes: “We’re incredibly excited to work with the Vidyard team as they capitalize on the dual trends of quantitative marketing and video itself. The first trend is undeniable: any marketer will tell you that today they live in the “Era of Analytics” (and long gone are the warm and fuzzy qualitative results.) The use of highly-engaging video content to reach customers is increasingly considered a critical part of marketing strategies, and that’s where Vidyard comes in. They allow for companies to leverage the best of both the creative and quantitative marketing worlds. Video is perhaps the best platform for creative expression, while the underlying analytics provided by Vidyard allow for detailed performance measurement.”

What will Vidyard do with all that growth money?

“Big wins come with lots of responsibility. We’re heads down in work,” Litt told BetaKit. “And we’re very dedicated to KW, and staying where we are. We will take over another floor in our building, and with the total space of about 20,000 square feet, our seating plan can accommodate 150 people. Upper floor is going to be sales and operations, and we will have the engineering floor,” said Litt.

Just a year ago, Vidyard had a headcount of 30 people. This new capital represents a massive growth opportunity for the company. Vidyard plans to beef up its sales and develop a sales training program, to train and hire people to work with customers and help them become successful video marketers.

“The infusion of the capital means we can provide innovative solutions to customers to solve their problems, deliver better experience and technology. Our customer network tells us what they want, and we will take the feedback, analyze it and build it into the product and the company.”

Vidyard also support gif thumbnails, which can be dropped into email to encourage click-throughs. Litt says that even now, when the cost of producing video is going down every year, many companies still feel they need to go out, spend their $10 million marketing budget and get Super Bowl ads. Yet people still watch a lot of home-grown content and like it.

“Everybody generates video content, and the ROI is off the charts,” says Litt. “It’s all about that ability to tell a good story.”

This morning Toronto Star readers woke up to a whole new newspaper experience. The entire edition is riddled with augmented reality experiences which aim…