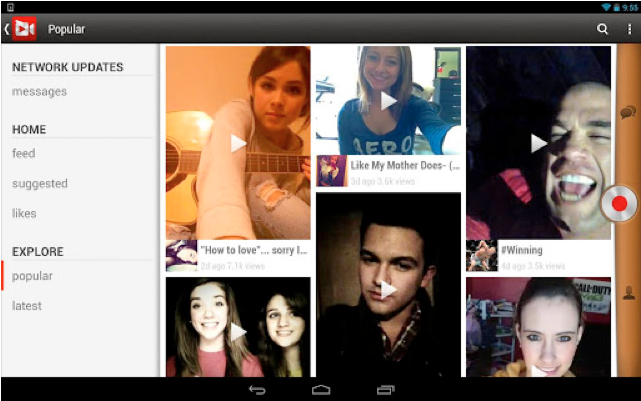 Mobile video app Klip today announced an update to its service, with the addition of several features that will let users converse through video. BetaKit covered the company when it launched its Android app in June 2012, and according to Klip its current user base is in the millions, although it didn’t disclose the exact number. It first launched its iPhone app in September 2011, and to date the company has raised a total of $10 million from Matrix Partners and Benchmark.

Klip’s VP of Marketing Chris Hamilton spoke with BetaKit about how the company positions itself against competitors like Viddy and Socialcam, saying that its trying to put the focus on making it a video diary. “At our core, it’s really that social dialogue,” he said. “Everyone from celebrities like Tito Ortiz, a big MMA fighter, who has over a million followers to someone who just signed up today to share cool interesting things they’re doing today…it’s really about the people.”

The first of the two new features introduced today is video replies to videos (also knows as Klips), which are limited to a minute and uploaded by the site’s community of ‘Klippers.’ Before this feature launch only text comments were possible on videos. The replies are displayed on the original video’s page to give other users context, and mobile app users can scroll through them with a swipe. The second feature release is a new private messaging feature akin to Twitter’s direct messages which lets users video message someone who follows them.

The other updates on the Klip mobile app include a redesigned video watch page that is optimized for the iPhone 5, and ‘one tap’ comments in which users can select from a range of emoticons to quickly post their reaction to a video without needing to type anything. Since its original launch, the app has been designed with the idea of creating as immersive of an experience as possible around video, so that users can quickly skin through videos by flicking their finger to preview them.

With the acquisition of similar mobile video app SocialCam by Autodesk, Hamilton was quick to note that the company is in it for the long run and wasn’t in any acquisition talks itself. Nor is it looking to roll out any monetization strategies, saying the focus remains solely on user acquisition and product development. With competitors in the space like Viddy and Keek, which raised $7 million earlier in the year, all striving to be the Instagram for video, the company is just one of several companies trying to crack the mobile video code.

“Some platforms are moving towards curating YouTube videos while there’s the other end of the spectrum of ‘hey, give me a very quick 15 second status update’ that’s almost equivalent to a video update for Twitter…it’s a very different dynamic. It might seem the differences are nuanced, they’re not, it reflects within the community itself,” Hamilton said about Klip’s differences from its competitors.

The company lets users add a range of video effects to their Klips, in addition to building a private circle of family and friends like they might on Google+ with whom they can share Klips they prefer not to share publicly. Today’s product updates could add to the app’s engagement, but it will face the same challenges as other apps that have struggled to make mobile vido as popular as mobile photo-sharing.

Quebec gov’t will begin collecting taxes from Airbnb in October

The Quebec government has reached an agreement with home-sharing company Airbnb to begin collecting ‘lodging taxes’ from short-term rentals in the province, which will…